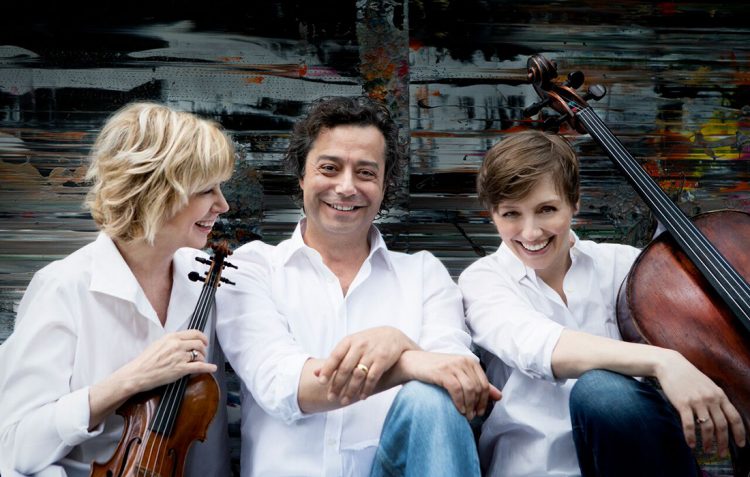 Trio Solisti, lauded by the New Yorker as “the most exciting piano trio in America,” was formed in 2001 and has since reached a level where it has been described by one critic as the group best equipped to take on the mantle of the celebrated and long-lived Beaux Arts Trio. Trio Solisti performs at festivals and in concert halls all over the country as a chamber group, and has also starred with symphony orchestras in such works as Beethoven’s Triple Concerto. (One such recent appearance was conducted by our own Alexander Platt in Wisconsin). Other notable recent bookings have included Great Performers at Lincoln Center, the Mostly Mozart Festival, and the People’s Symphony Concerts at Town Hall in Manhattan. The trio has been a regular feature of the Telluride Music Festival in Colorado, and is ensemble-in-residence at Adelphi University in Long Island. The members of the trio are also prolific recording artists.

Violinist Maria Bachmann also frequently plays as a soloist and a recitalist. Of Hungarian descent, she is a strong advocate for new music, having premiered and recorded the works of several leading composers. She has performed all over the United States and Europe, as well as in China. She studied under Szymon Goldberg at the Curtis Institute, where she won the Fritz Kreisler Prize for outstanding graduate violinist, and she is the artistic director of the New York Friends of Chamber Music. In that capacity, in 2015 she curated a three-concert series of the complete piano chamber music of Johannes Brahms, performed to critical acclaim by Trio Solisti and guest artists at Carnegie’s Weill Recital Hall. Cellist Alexis Pia Gerlach graduated from the Yale Music School and Juilliard, and has studied with such star cellists as Aldo Parisot, William Pleeth, and Janos Starker, among others. She is much in demand as a soloist and recitalist in concert halls and festivals throughout the United States, including the Marlboro Festival, and has been a guest artist with the Chamber Music Society of Lincoln Center. Fabio Bidini is regarded as the finest pianist to have emerged from his native Italy since Benedetti Michelangeli, and launched his world career by winning major international contest prizes, including the Busoni and the Van Cliburn. He has an extensive concerto repertoire, and has played as a soloist with the Philharmonia Orchestra of London, as well as the San Francisco and Dallas Symphonies. He has also collaborated as a chamber player with several notable quartets.

Joseph Haydn was indeed Papa Haydn, having essentially fathered both the symphony and the string quartet. His late piano trios, though they are still basically piano sonatas accompanied by strings, are striking for the increasing independence they give to the violin and the cello. There are about thirty authenticated trios, the last few of which are known as the London Trios, for he wrote most of them during his phenomenally successful second visit to that city in 1794. They were written for and dedicated to Therese Jensen, a very gifted English pianist; she must indeed have been a phenomenal player, since the piano part in these trios (like Haydn’s last piano sonatas, also dedicated to her) are extremely taxing, demanding a highly supple right hand for their countless sparkling runs. Haydn, like Beethoven, was delighted to take advantage of the powerful English pianos, so different from the older and lighter fortepianos. Charles Rosen, the noted pianist and music writer, declared that the late Haydn trios “are, along with the Mozart concertos, the most brilliant piano music written before Beethoven.” To Beethoven, of course, goes the credit for the ultimate development of the piano trio as a medium for three quite independent voices to scale dramatic heights.

Even without such heights, however, Haydn’s Trio No. 27 in C Major is an unalloyed delight. It begins with an emphatic piano flourish, followed by a scintillating series of runs, neat turns, and decorative flourishes, echoed but never led by the strings. The first movement is the most elaborately developed of the three, an extended sonata-allegro form with the most dramatic music in the central section. The Andante second movement is just as graceful, but slower, with a startling central section where the melody moves abruptly into a dark A minor, reinforced by the cello, before gradually returning to the major in a series of glowing modulations. The Presto finale has a delightful, dashingly frisky theme that is tossed back and forth between piano and violin in such a carefree manner as to inspire a smile; Rosen called this the most humorous of Haydn’s trio movements.

Antonín Dvořák was slow in gaining recognition outside his native Bohemia, and was struggling so hard to make a living that in 1876 he actually had himself certified as a pauper in order to qualify for a grant from a Vienna-based commission to support worthy musicians. Among the judges were Johannes Brahms and the critic Eduard Hanslick, who were so impressed with Dvořák’s work—he sent in no fewer than fifteen pieces, including his first two symphonies—that they gave him the maximum award. This changed his life at around the time he was writing the Piano Trio No.1 in B-flat Major, Op. 21, over exactly the same period as his much more celebrated Serenade for Strings. It was a happy time for the composer; apart from his improved financial fortunes, his first son has just been born. (This child, like his first three, was not to survive long; six born later would survive.)

This first trio is a predominantly cheerful and exuberant piece, full of melodic invention and rhythmic vigor. It begins with a lovely, almost dreamy theme, which is swiftly interrupted by far more dynamic, surging music with a distinct hint of Bohemian dance. This is very extensively developed until the long movement ends with a surprisingly quiet finish, on a light piano arpeggio. The Adagio second movement is essentially a long-breathed lament in G minor, a clear harbinger of similar moments to follow in other chamber works and symphonies. It goes through a number of modulations, and toward the end develops into a four-part canon followed by a brief major episode before the lament fades away. The Scherzo is a polka-like dance, rather like something from the later Slavonic Dances, marked by constant bracing shifts in rhythm. Dvořák revised the calmer central section extensively a few years later, but it still lacks the striking profile of the rest of the movement. The Finale is a sort of perpetuum mobile: a string of vivid gestures, rather than clear-cut themes, that are pushed forward with increasing drive until an exhilarating finish crowned with cascades of piano flourishes. Like many early Dvořák works, the trio is a little overextended, at more than half an hour, but never less than delightful.

Ernest Chausson occupies an unusual position in French musical history, between the Romanticism of Franck and Massenet (with both of whom he studied), and the cool modernism of Debussy (a close friend for most of his life). He was unusual in that he never had to work for a living; his father had made a fortune rebuilding Paris under Napoleon III and his architect, Georges-Eugène, Baron Haussmann. Chausson, under parental pressure, earned a law degree, but his heart was in music, and he soon gave up the bar and took himself to the Conservatoire de Paris. Here he failed, as did many major French composers, to win the Prix de Rome. But he learned well from Franck and, ultimately, from Wagner, when he went to Bayreuth. Chausson’s musical output was small but choice; his life ended at forty-four in a fatal bicycle accident. There is a symphony, the Poéme for violin and orchestra, a concerto for piano, violin and string quartet, and the extended song Poéme de l’Amour et de la Mer, all of which are performed with some frequency.

Chausson wrote the Piano Trio in G Minor, Op. 3, in 1881. An early work that already showed the influence of Franck, it went virtually unheard in his lifetime, but has gained some currency in recent years. It is a strange work, its often volatile moods reflecting Chausson’s rather manic-depressive personality. The first movement, marked Pas trop lent—Animé (Not too slowly—animatedly), begins with a bass rumble from the piano, followed by a yearning theme for cello, joined by violin. These elements reappear at intervals through much of the work, giving it something of Franck’s cyclic structure. The yearning turns into passionate declaration several times, the piano hammering away in fine dramatic form; in fact, the piano throughout serves to anchor the often chromatic and slippery harmonies of the strings. The second movement, marked Vite (Quickly), is a complete contrast, a delightfully jaunty scherzo, without shadows and featuring rapid piano runs against slower strings. The slow movement, Assez lent (Rather slowly), begins songfully, with the strings playing a sad melody with gentle piano accompaniment, which turns out to be a much slower version of the work’s opening. The music becomes urgent again, with dramatic piano rhetoric, then meanders to a lovely reposeful close. The finale, Animé (Animatedly), begins with an unexpectedly cheerful theme, almost waltz-like, before drama and gloomy anxiety return, with strenuous strings and a thunderous piano recalling the cyclic music. The sunny waltz appears briefly once more before another outburst leads to a sudden but firm concluding piano flourish.