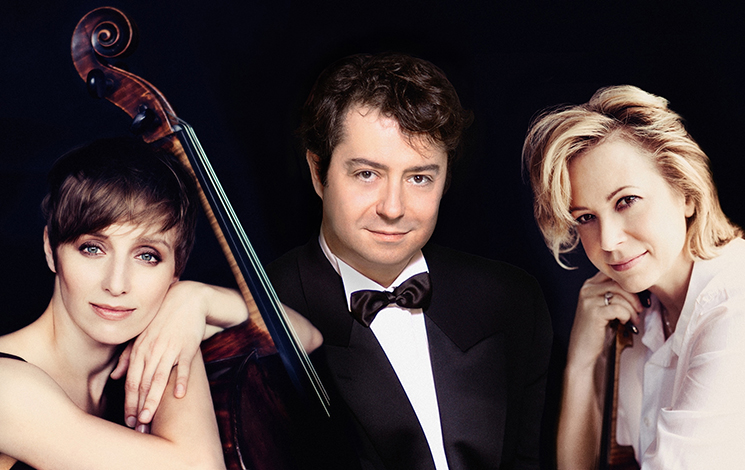 ONLINE TICKETS SALES ARE CLOSED. GENERAL SEATING TICKETS WILL BE AVAILABLE AT THE BOX OFFICE WHICH OPENS AT 3PM.

Trio Solisti’s reputation as “the most exciting piano trio in America” (The New Yorker) was affirmed in rave reviews during the 2016-17 season: “the superlative Trio Solisti gave an immaculate and insightful performance” (The Dallas Chamber Music Society – Theater Jones), “a compelling performance…Trio Solisti really knocked it out of the ballpark” (Chamber Music Monterrey Bay – Peninsula Reviews), and “the most fully explored, interestingly probed, and fully engaged [performance of the Brahms Trio in B major] that I’ve ever experienced. Chamber music connoisseurs should absolutely not miss Trio Solisti.” (Rockport Chamber Music Festival – The Boston Musical Intelligencer)

“The most exciting piano trio in America.” – The New Yorker

The brilliant Trio Solisti, longtime Maverick favorites, are also critical winners: “The most exciting piano trio in America,” says The New Yorker, and The Wall Street Journal calls them “the natural successor to the Beaux Arts Trio as the outstanding chamber music ensemble of its kind.” Founded in 2001, Trio Solisti has played in all the major halls and music festivals around the country, and has also been active in commissioning trios from such composers as Pulitzer winners Jennifer Higdon, Paul Moravec, and Kevin Puts. They were the founding ensemble for the Telluride Musicfest in Colorado, and for fourteen years have been the ensemble-in-residence at Adelphi University in Garden City, New York. Violinist Maria Bachmann studied at the Curtis Institute, where she won the Fritz Kreisler Prize for outstanding graduating violinist. She has performed around the world and as soloist with the National Symphony, the St. Louis Symphony, and orchestras in Taipei and Shanghai. Bachmann is also artistic director the New York Friends of Chamber Music. Cellist Alexis Pia Gerlach has performed as soloist and recitalist around the world, has commissioned many new works, and has also specialized in collaborating with dancers, including the Paul Taylor Dance Company and New York City Ballet principal Damian Woetzel. Fabio Bidini, Italian-born pianist, launched his spectacular career by winning the Busoni and Van Cliburn contests. He made his U.K. debut with the London Symphony Orchestra and his U.S. debut with the Atlanta Symphony. He has played with many orchestras worldwide and in many recitals and chamber peformances in many American festivals. He has played with several quartets, in addition to his role with the Trio; he has taught in Germany, and currently in Los Angeles.

Joseph Haydn was a man of quantity as well as quality; in addition to the dozens of quartets and the hundred-and-four symphonies he fathered, he also wrote an astonishing forty-five piano trios, also regarded as keystones of their repertoire. Pianist and author Charles Rosen said of them that they were, “along with the Mozart concertos, the most brilliant piano music before Beethoven.” And they are really piano music, above all. The piano always takes the lead role but in Haydn’s trios, because the piano of his time was a softer-voiced instrument, the cello tends to reinforce the bass lines, the violin the treble ones. That’s not to say that they aren’t very much the work of three players; it’s as difficult to imagine them for piano alone as for string trio. The piece we’re hearing today is in fact the last of Haydn’s trios, written while the composer was on one of his two highly successful trips to London, in 1797. It was one of three known as the Bartolozzi Trios, because they were dedicated to Theresa Jansen Bartolozzi, an accomplished London pianist who was a friend of the composer’s. It is the essence of galant music and, like most of the trios—and Haydn himself—is essentially sunny in nature. The first movement has a graceful four-note theme, with a delightful answer, and is elegantly worked out, with much brilliant scale passagework from the piano. The second movement, marked Andante innocente, is just that: a simple, artless tune that seems to suggest a little girl walking contentedly along. The finale, an Allemande, or dance in the German style, is the liveliest movement. It is zesty and brisk, with occasional skirls from the strings that suggest Scotland as much as Germany, and ends in piquant style.

Franz Schubert had less than a year to live when in 1827 he composed his two great piano trios; it was one of the most extraordinary bursts of inspired creativity in all of music. Just think: In the last months of his life, Schubert produced not only Die Winterreise, his last great song cycle (by then he was tiring of being thought of mostly as a composer of songs), but also the great C Major Symphony, the last three piano sonatas, the ineffable string quintet, the piano impromptus, and these trios, which can be found among all music lovers’ very favorite piano trios. (A personal note: My own passion for chamber music was ignited fifty years ago by LPs of Schubert’s trios played by the trio of Isaac Stern, Leonard Rose, and Eugene Istomin.) Perhaps no one has evoked these trios’ deathless appeal better than Robert Schumann, who wrote of them: “One glance at them, and the troubles of our human existence disappear, and the world is fresh and bright again.” They are both long for the genre, lasting more than forty minutes apiece, but the phrase “heavenly lengths,” sometimes attached to Schubert’s C Major Symphony, is nowhere more appropriate than here. Yes, they are long, and they do repeat their wonderful themes frequently; but the themes themselves are so joyous and irresistible, and the transformations through which they pass—of key, harmonies, tempi, and instrumental color—are so endlessly beguiling that the ear is continuously surprised and delighted. By common consent, the Op. 99 trio we are hearing today is regarded as the lighter, perhaps more immediately attractive, of the pair, and the Op. 100 as the more weighty and serious-minded. But both are founts of melody and craftsmanship that never cease to astonish and delight.

The Op. 99 trio opens with a brightly bubbling, irresistibly forward-moving theme in the strings; the tunes are taken over by the piano, and the ensemble throws the tune around between them until a slower and more elegant cello melody becomes the second subject. The two themes are delightfully worked together over more than fifteen minutes; it’s all so inventive and enchanting—and often surprisingly—that the listener never tires of it. The slow movement was originally written as an adagio, but Schubert changed his mind, and published it instead, separately, as the (much beloved) Adagio Notturno. The andante he substituted for it is even lovelier, a dreamy song begun by the cello, continued as a duet with violin, then taken over by an equally songful piano. There is a more turbulent central section, led graciously by a trilling piano, before the graceful opening song returns. The scherzo is a dancing ländler with infectiously repeating notes; that shades into a trio that is a simple and charming waltz. The ländler returns, richly decorated. The last movement is described as a rondo, but is more like a set of brilliant variations on a rippling opening tune. It undergoes several bursts of fugal development—rare in Schubert—and features a wonderful episode where the piano moves into double time, before a satisfying final flourish. Stravinsky is supposed to have said of Schubert’s finest music: “One does nod off at times, but what matter, if one awakens in paradise?”

Robert Schumann occupies the very heart of German Romanticism in music, and the first (and by general acknowledgement, finest) of his three piano trios shines forth in purest romantic glow. It was written in 1847, at a time when Schumann was recovering from a long period of illness and depression—and had perhaps been inspired competitively by his wife Clara, who had recently written her own piano trio. (Hers and his were often paired at nineteenth-century concerts, though hers seems to have dropped from favor these days). Schumann had always hoped to be a concert pianist, but as a younger man had severely injured his fingers in a device he had invented to aid in practicing, and was never to play professionally—perhaps one of the reasons that he took increasingly to songs and chamber music in his later years, though the piano was still a cherished instrument. He much admired Mendelssohn’s splendid trio in D minor, and had probably modeled his own choice of key on it. Clara wrote enthusiastically of the trio, “It sounds as if composed by one from whom there is still much to expect.” Indeed.

The first movement—labeled “with energy and passion”—begins darkly and arrestingly with a passionate violin theme accompanied by bass piano sounds. As this theme develops, sometimes in canon, the air is one of restless agitation. A second, more lyrical theme is introduced by the cello, and the two are developed together, often with block chords from the strings and agile piano runs. In mid-movement a sudden hush falls, and violin and cello, playing near the bridge, create a strange sort of buzz, with very soft piano notes dropped, as if from a cloud, above. This is the introduction of a third theme, developed forcibly with an almost orchestral sonority. (It is surprising throughout how rich a sound Schumann extracts from his instruments). A sudden dramatic flare-up leads to a quiet conclusion. The second movement, much shorter and lighter, is lively and energetic, with strongly syncopated phrases tossed back and forth and shining scale runs from the piano. It is all flamboyant gesture rather than theme, but very effective. In the slow movement the composer wrings from cello and violin, playing close to each other’s registers (high and low respectively) a song that seems to speak of a sorrow beyond words—perhaps his darkest-ever music. There is a brief brightening, but the ending is pathetic, all hope seemingly lost. The finale (“with fire”) breaks in with a huge contrast—vigorous, determined, and optimistic music that charges along and sweeps the listener with it. There is a thrilling acceleration in the final few bars, and a conclusion so definitive that it serves splendidly to end the Maverick season on a very high note.