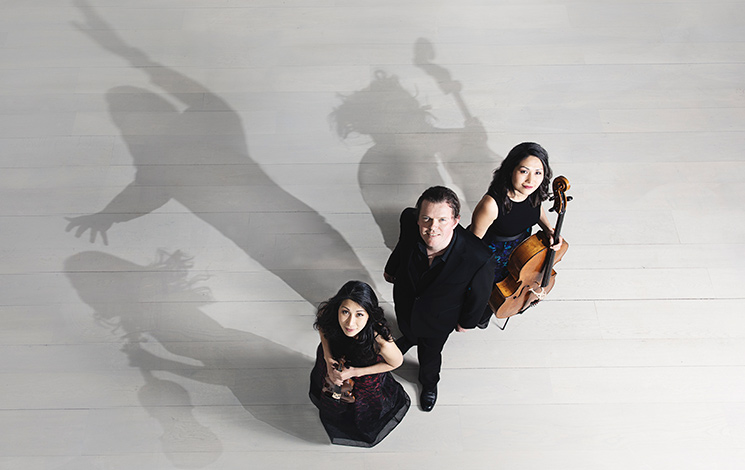 Tchaikovsky: Trio in A Minor

The Trio Con Brio Copenhagen are Maverick favorites; their last visit was less than a year ago. Founded in 1999 in Vienna, they have been described by the New Yorker as “one of the finest young piano trios currently on the scene,” and elaborate compliments to their playing have become the norm. The trio consists of Danish pianist Jens Elvekjaer and two Korean sisters, Soo-Jin Hong (violin) and Soo-Kyung Hong (cello), who is now Jens’s partner in life as well as in music. After initially combining in Vienna, the trio eventually settled in Copenhagen, where they became the ensemble in residence at the Round Tower. They have won many noted international awards, including, most impressively, the Kalichstein-Laredo-Robinson trio award in 2005. This launched them on a major international career which has taken them to most major halls around the world, including London’s Wigmore Hall, Amsterdam’s Concertgebuow, and Carnegie Hall. One of their specialties, outside of their extensive repertoire of chamber music, has been the performance of Beethoven’s Tripe Concerto with a number of major symphony orchestras. They have made several admired recordings, and this spring have been recording Beethoven’s Piano Trios.

Beethoven’s “Ghost” Trio was written in 1808, at the height of his powers in his Middle Period. It was written partly at his country retreat at Heiliegenstadt, where he had recently completed the “Pastoral” Symphony, and partly at Vienna lodgings provided for him by Countess Maria Von Erlody, to whom he dedicated the work. This was a time of great hardship for Beethoven; he was becoming increasingly aware of his growing deafness, and felt strongly that his music was failing to bring him an adequate livelihood—though this situation soon improved when aristocratic friends, including the Countess, managed to secure him a regular stipend from the city. The trio that emerged from this difficult time is best known, of course, for the strange and gloomy atmosphere of its second movement. It was Carl Czerny, one of Beethoven’s pupils, who said it reminded him of the ghost in “Hamlet,” and the name stuck. A more probable link, in Beethoven’s mind, was with another Shakespearean tragedy, “Macbeth,” for at the time he was contemplating an opera based on the play, which never materialized. He noted in his diary, however, that the music in the slow movement might have been connected in his mind with the Three Witches in that play.

Be that as it may, the trio, though perhaps marginally less celebrated than the “Archduke” that immediately followed it, is a vigorously powerful work full of the composer’s fervent impetuosity and abrupt mood swings. It begins with a headlong flourish that quickly develops into a theme which is alternatively flowing and lyrical, and lively. The meter sometimes switches confusingly between 3/4 and 4/4, and there is an extensive development in an almost improvisatory manner. The composer’s mastery of the form of the three-movement piano trio is now absolute, with remarkable tone colorings in the strings and pungent support from the piano.

The famous largo espressivo slow movement brings the supernatural to the fore. There is a somber opening, with eerie piano trills beneath. The atmosphere is dark and brooding, like music heard in a twilight haze. After a few minutes of chilly gloom there is a brief climb into a sunlit major before the darkness closes in again. The music slows almost to a halt before three soft chords and a plaintive piano trill bring the movement to a quiet ending.

Per Norgard is the dean of contemporary Scandinavian composers, described by one critic as the greatest composer alive today. He is the creator of a huge body of over 300 works in every form, ranging from chamber and vocal music through eight symphonies, numerous concertos, several operas and incidental music for movies and theater. Now 85 years old, he remains an experimenter and a visionary, with a playful sense of humor (he once appeared naked on the cover of a book about him). His face, at once craggy and humorous, is a reflection of his music.

Inspired initially by fellow Scandinavians Jean Sibelius, Carl Nielsen and Vagn Holmboe, he moved decisively away from them after studying in the late 50s with the elderly Nadia Boulanger in Paris. He discovered what he called “the infinity series,” a way of structuring music in a mathematical way akin to fractal geometry—but not, like Schoenberg’s serialism, atonal. The math surrounding the method may be opaque to all but specialists, but the music that results is strangely arresting. Coupled with Norgard’s deep absorption in nature and his endless inventiveness, it has a power and atmosphere very much its own. His music is not as well known in this country as it should be, though the adventurous Alan Gilbert, an admirer, conducted the U.S. premiere of his Eighth Symphony with the New York Philharmonic in 2016.

The “Spell” piano trio was originally composed in 1973 as a clarinet trio for the American Montanga Trio, and Norgard later rewrote it for piano trio. It is composed in what he has called his “infinity” style, and he says that its title refers both to the notion of “casting a spell,” and to the fact that the three instruments “’spell’ their way through one motif after another.” He continues: “The course of the work can be described in broad outline like a landscape seen from an aeroplane.”

What is initially most striking about the music is the piano part, which chimes persistently, like a bell, from the instrument’s sonorous middle register, while the violin and cello form scurrying patterns above and below its pulse. The colors in the resulting sound picture are fascinatingly various, and as the work comes to a scintillating climax there is a distinctly jazzy swing to it. Toward the end the piano chiming reappears, “but on a new basis of sound and emotion; the circle proves to be a spiral,” the composer has said. This arresting work, which lasts about 15 minutes, has been recorded by the Con Brio.

Tchaikovsky’s Piano Trio in A Minor is his only work for the medium, and he had long resisted the notion of writing for this combination. His benefactress, Nadezhda Von Meck, had pleaded with him to write such a piece, but he refused, writing to her in 1880: “I simply cannot endure the combination of piano with violin and cello. To my mind the timbre of these instruments will not blend.” Nevertheless, a year later he began work on just such a trio, finishing work on it in Rome early in 1882. This time he wrote to Von Meck: “Now I can say with some conviction that the work is not all bad. But I am afraid, having written all my life for orchestra, and only taken late in life to chamber music…I fear I may have arranged music of a symphonic nature as a trio, instead of writing directly for the instruments.” He dedicated the work “To the Memory of a Great Artist,” the pianist Nikolai Rubinstein, who had just died. Tchaikovsky was deeply saddened by his death, though their relationship had been stormy at times: Rubinstein had famously scorned his First Piano Concerto as unplayable, though he later played it often.

Tchaikovsky himself was an indifferent pianist, and the Trio’s piano part is both particularly prominent—almost overwhelmingly so at times—and very difficult to play. It is all too easy to drown the strings at moments, and the work’s great length (it generally clocks in at around 45 minutes) and high emotionality make it something of a test for both performers and audience. Notwithstanding its problems, however, the work has always been popular, and is one of the most frequently played in the Trio’s repertoire; they estimate they have played it perhaps 100 times.

The long and intense first movement, called an “elegiac piece,” is in sonata form, though one drenched in the composer’s trademark romanticism and high-flown rhetoric. It begins with a sad cello melody whose four-note motto theme forms the basis for the entire elaborate movement. This theme goes through various transformations, lyrical and expansive in Tchaikovsky’s most symphonic manner—yes, he did think symphonically, even for only three instruments—until it reappears at the end as something like a funeral march.

The second, even longer, movement is a huge set of variations on a theme stated at the outset by the piano—an instantly memorable tune that sounds like a hymn or perhaps a folk tune, of the kind beloved by Rubinstein. It has been suggested that it represents a happy period in the friendship of the two men. Tchaikovsky was masterly at variations, and the 11 that follow are remarkably varied and individual. They include a waltz, a delicate mazurka, a music box-like turn for piano, even an elaborate three-part Bachian fugue (sometimes cut, but not by the intrepid Con Brio). The 12th variation is essentially a new movement; the initial theme is restated firmly, but then the elegiac theme from the first movement returns, at a high emotional pitch, and devolves into another funeral march. Finally this ebbs away into music of tragic resignation, not unlike the profound, hushed melancholy that ends the Pathetique Symphony.

The trio’s unconventional shape and power were to act as inspirations for later much-admired trios by other Russians, like Rachmaninov and Shostakovich—a remarkable legacy.

All program notes are copyright John F. Baker. It is permissible to quote short excerpts for reviews. For permission to quote more extensive portions, or to copy, publish, or make other use of these program notes, please contact us at info@maverickconcerts.org.