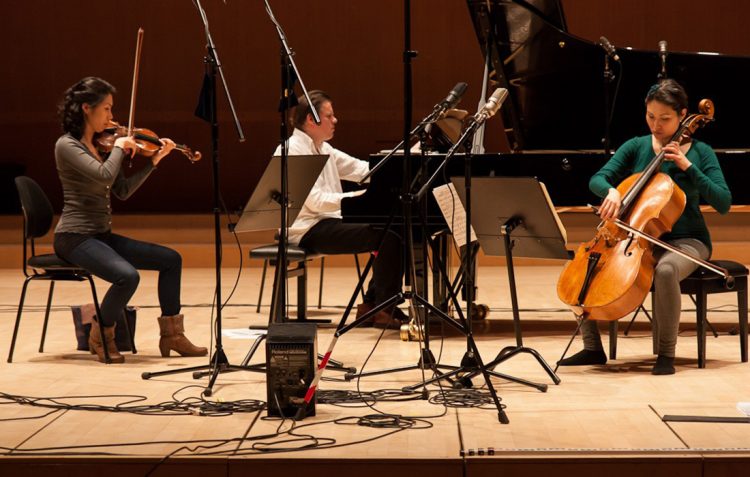 Trio con Brio Copenhagen has throughout their career been hailed by press and audiences for their “unique sound and unity of interpretation” —Frankfurter Allgemeine Zeitung, Germany.

Founded in Vienna in 1999 with the concept of pairs coming together, the two Korean sisters and Jens (who is married to Soo-Kyung) have since then been exploring the piano trio repertoire with freshness and curiosity, respect and reflection. In particular, they have been gaining a reputation for the vigor of their approach to the core repertoire: “Works by Beethoven, Schubert, and Brahms are transformed in their hands into the alive-and-kicking music of today” —Esben Tange, editor at DR P2.

Trio con Brio Copenhagen is in great international demand and has an intensive worldwide touring schedule. Performances this season include Washington, DC, and Los Angeles, as well as concerts in Germany, France, Sweden, Norway, and Denmark. In recent years, Trio con Brio Copenhagen has appeared in major concert halls in Europe, the US, and Asia, including Tivoli Concert Hall, the Concertgebouw, Carnegie Hall, Wigmore Hall, the Konzerthaus Berlin, the Seoul Arts Center, Tokyo Bunka Kaikan, and Teatro Olimpico Vicenza.

Since its inception the trio has won most of the international competitions for piano trio, including the ARD (Munich), Vittorio Gui (Florence) and Norway’s Trondheim Competition. In January 2015 the trio was the first ensemble to receive one of Denmark’s most prestigious music awards, the P2 Artists Prize, at a live televised concert where they performed Beethoven’s Triple Concerto with the Danish National Symphony Orchestra. Other major awards include the Kalichstein-Laredo-Robinson International Trio Award and the Allianz Prize in Germany’s Festspiele Mecklenburg-Vorpommern.

Trio con Brio Copenhagen continues to play a central role in Scandinavia’s vibrant contemporary music scene. Several of Denmark’s most prominent composers, including Per Nørgård and Bent Sørensen, have composed and dedicated works to the trio, as has Sweden’s Sven David Sandström. The trio was enormously honored to be chosen by Per Nørgård to be the dedicatee of a work that was premiered at a festival in Stockholm celebrating his eightieth birthday in 2012. The trio members are founders and artistic directors of the Copenhagen Chamber Music Festival.

The trio’s debut CD was unanimously praised by critics. American Record Guide wrote: “One of the greatest performances of chamber music I’ve ever encountered.” Gramophone Magazine wrote: “The performances can compete with the best available… a superb, greatly gifted chamber group.” Their CD of works by Mendelssohn was chosen by Classic FM, UK as Chamber Disc of 2011.

As educators, the trio gives master classes on their international tours, including offerings at Yale University and Rice University in Houston.

The trio’s sound benefits from the superb instruments all three play: Soo-Jin plays a violin built in the seventeenth century by Andrea Guarneri, and Soo-Kyung plays a Grancino cello. The ensemble has been coached by the Alban Berg Quartet, Frans Helmerson, Mihaela Martin, and Harald Schoneweg at the Cologne University of Music and received excellent musical guidance by Ferenc Rados in Budapest.

The key of E major is an unusual one for instrumental chamber music, but one which Mozart apparently felt expressed his outlook for the Piano Trio No. 4 in E Major, K. 542. In the opening Allegro, the piano offers the first theme, a pleasant, lilting tune in 6/8 time. The violin and piano are featured alternately, with the cello providing a simple bass line. The violin presents the second theme, and the cello finally gets to offer its opinion, if only briefly.

The Andante grazioso moves to the key of A major. Once again, the piano presents a song-like theme. The violin takes it up, moving it into the minor, with piano embellishments. This is a monothematic movement: Mozart here is not striving for sharp contrasts or complex structures, but for grace and beauty.

For the Finale (Allegro), the music moves back to the home key. The second theme comes in shortly after the first, and the parts are happily interwoven. At last the cello gets its moment in the spotlight, playing a duet with the piano and in general participating on a more equal basis. The part writing is more complex, and the development is more intricate than in either of the other two movements.

In 1788, Mozart was in desperate need of money, writing to his friends for loans. In a letter to Michael Puchberg, he added the postscript: “When are we to have a little musical party at your house again? I have composed a new trio!” He was referring to this trio, and hoped to raise some funds by playing it.

Bedřich Smetana was the first Czech nationalist composer, a generation before Antonín Dvořák. His music is programmatic—it refers to non-musical ideas, stories, and associations—and passionate, in keeping with the Slavic style. Smetana was deeply affected by the death of his daughter from scarlet fever, and dedicated his Piano Trio in G Minor, Op. 15, to her. The work is inscribed: “In memory of our eldest child, Bedřiška [Frederica], whose rare musical talent gave us such delight; too early snatched from us by death at the age of four and a half years.”

Every movement is filled with pathos. The opening Moderato assai is a cry of anguish uttered first by the violin and then the cello, with low chords in the piano. A second theme—a sweet cello melody with a gentle piano accompaniment—portrays the innocence of childhood. Smetana said this was one of his daughter’s favorite melodies. A third theme in the major drives forward like a sturdy march. These three themes interweave: tragic, playful, and steady. The movement ends with the opening anguished theme, but played in the marching meter.

The second movement (Allegro ma non agitato) is a scherzo, although it is in 2/4 time rather than the usual 3/4. A dotted-rhythm theme gallops along, until the first Alternativo (what is usually called a Trio section) comes in with a nostalgic tune. The cello provides a steady downbeat against the mellifluous violin and piano, and then joins in with the song in dialogue with each of the other instruments. For the second Alternativo, marked Maestoso (Majestic), thick chords alternate between fortissimo defiance and pianissimo reverie, after which a brief reminder of the gallop returns.

The Finale (Presto) alternates between thick angry chords and tranquillo conversations among the three solo instruments. The music travels back and forth from minor to major, from dark to light, and from mournful to triumphant, until the inevitable, inexorable funeral march. The ending builds the excitement to a final coda ending in an emphatic G major chord—the statement that life goes on.

Shostakovich dedicated his Piano Trio No. 2 in E minor, Op 67 to the memory of his dear friend Ivan Ivanovich Sollertinsky, who died at the age of forty-one. Sollertinsky spoke two dozen languages. He kept his personal journal in ancient Portuguese to keep it private. He was a renowned music critic, a professor at the Leningrad Conservatory, and the artistic director of the Leningrad Philharmonic. Sollertinsky introduced Shostakovich to the music of Gustav Mahler and other Jewish composers active in Europe. Shostakovich wrote to Sollertinsky asking him to help when the governmental censors complained that Shostakovich’s music was unplayable. Sollertinsky wrote a rave review of Shostakovich’s opera Lady Macbeth of Vitebsk, but after Stalin saw the opera, both the composer and the critic were reviled and quickly fell from official favor.

When his friend died of a heart attack, Shostakovich wrote to Sollertinsky’s widow, “I cannot express in words all the grief I felt when I received the news of the death of Ivan Ivanovich. He was my closest and dearest friend. I owe all my education to him. It will be unbelievably hard for me to live without him.”

This was also the period of time when the realities of the Holocaust and the concentration camps were finally making their way into the consciousness of Russians and other international communities. Shostakovich writes a memorial for his friend that becomes an elegy to all victims of war and oppression.

Shostakovich starts with a slow section (Andante), as is common in elegies. Violin and cello trade roles, with the cello playing an eerie, high theme in harmonics. The violin enters as the alto in fugal harmony, and finally the piano provides a dark, low bass. As the tempo moves to Moderato, the piano takes the theme as the strings play pizzicato. Simple folk tunes, including a cheerful ditty reminiscent of “Old MacDonald,” appear, somewhat incongruously, as the music builds in speed and intensity.

The second movement (Allegro con brio) is a scherzo, as well as a portrait of the dedicatee. Sollertinsky’s sister described the frenzied and breathless movement thus: “That is his temper, his polemics, his manner of speech, his habit of returning to one and the same thought, developing it.” The central Trio is lighthearted and celebratory, featuring the piano.

In the Largo, piano chords imitate the tolling of bells. The violin plays a mournful melody, and then accompanies the cello as it takes up the tune. This movement is a passacaglia, an old form of theme and variations, with the strings interweaving variations above the piano’s ostinato progression (a repeated pattern of chords).

Themes from previous movements—including the canons and the “E-I-E-I-O” ditty—reappear in the finale (Allegretto) like thoughts and memories of the departed. Klezmer melodies make this movement unique, poignant, and eerie, with something of the feel of a danse macabre. The composer wrote: “It seems I comprehend what distinguishes Jewish music. A cheerful melody is built on sad intonations…. Why does he sing a cheerful song? Because he is sad at heart.”