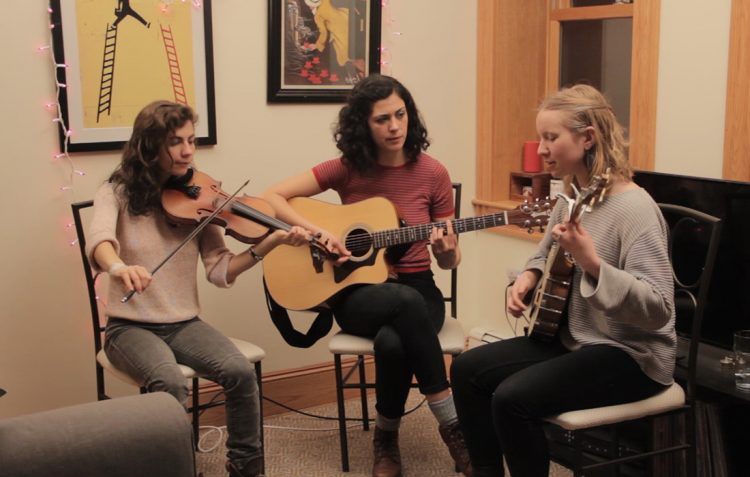 The Ladles have three-part female harmony perfected, but their sound is more than that. They are an amalgamation of their respective histories and influences, blending swing, old-time, neo-soul, and contemporary choral music into a sound all their own. Using solely acoustic instrumentation and three voices, they create a dreamy otherworldly atmosphere that draws audiences in and demands attention. They quiet noisy bars and liven up staid concert halls. Hailing from the rich musical history of the Catskill Mountains in New York State, Katie Martucci grew up singing and playing fiddle and guitar. The daughter of jazz pianist Vinnie Martucci, she began performing with her father at a young age. By the first grade, she was writing her own songs and playing for tips. Her musical journeys led her to the Ashokan Western and Swing Week Fiddle & Dance Camp, vocal lessons with Laurel Masse of Manhattan Transfer, a brief stint of collegiate a cappella at Skidmore College, and, ultimately, to the New England Conservatory. While at NEC, Katie studied voice, violin, and songwriting in the Contemporary Improvisation Department, and had the opportunity to work with Dominique Eade, Ran Blake, Hankus Netsky, Carla Kihlstedt, and Eden MacAdam-Somer. Since graduating in 2016, Katie has been on the move. She currently pays rent in New Orleans, but you’re more likely to find her out on the road, playing with Brooklyn-based band Goldfeather, sitting in with John Kirk and Trish Miller of Quickstep, or touring with The Ladles. Caroline Kuhn grew up in the grit and bustle of the Upper West Side. She began her singing career at age four, recording jingles for radio and television. As Caroline’s voice became less marketable with the changing tides of the recording industry (and puberty), she joined the Young People’s Chorus of New York City. There, she had the opportunity to travel the world performing contemporary music by composers such as Meredith Monk and Michael Gordon. She attended LaGuardia High School of Music and Art and began learning tenor banjo to accompany her songwriting. She went on to the New England Conservatory, where she studied voice with Cristi Catt and Dominique Eade and continued to develop her theoretical musical intuition. Lucia Pontoniere grew up in the diverse San Francisco Bay Area. The fourth of nine children, she was exposed to varied styles of music from a young age—everything from West African drumming to Balinese gamelan. At the age of six, she began competing in local fiddle competitions in the peewee division. Three years later, she was accepted to the Young Musician’s Program at UC Berkeley. There she studied with classical violinist Virginia Baker of the San Francisco Symphony and began a classical journey, attending Meadowmount School of Music in 2008. This continued on into high school, where she was awarded a scholarship to attend San Domenico School and play in the award-winning Orchestra da Camera. After playing and performing fiddle music around the Bay Area in a duo with her sister on banjo, Lucia decided she wanted to pursue music as a career. This led her to New England Conservatory’s contemporary improvisation department. However, realizing she wanted to delve deeper into fiddle music, she transferred to Berklee College of Music, where she is currently pursuing a bachelor’s degree in professional music with a concentration in violin performance. Lucia is constantly evolving as a musician—finding ways to mesh all the different parts of her life into her fiddle playing, and performing with the most honest voice she can bring to her music. Katie, Caroline, and Lucia finally crossed paths in the fall of 2014 at New England Conservatory. At that point in time, they were the only women in the undergraduate contemporary improvisation program, and became close friends. Hours spent playing together in the dorms led to performances at friends’ house concerts and local Boston venues. By the following year, they were living together in Cambridge and performing as The Ladles (a name fashioned after an altered “ladies room” sign in Jordan Hall). The Ladles released their first EP in the spring of 2016 and then spent the subsequent summer touring the Northeast, captivating audiences with their distinctive vocal harmonies and unique arrangements. They are gearing up for their second annual summer tour, and have plans to record their first full length album this coming winter. In reviewing their EP release, Knar Bedian of the Sound of Boston wrote: “It’s not often that you find inspiration for a band moniker on the door of a public restroom. But a cheeky third floor restroom sign at NEC labelled The Ladles Restroom—an improvised edit by a male student too lazy to walk to the other end of the building—is exactly where The Ladles found their name. “We’ve been keeping an eye on this female folk trio for a while now; we named them one of our Artists to Watch in 2016, and even had the privilege of recording some of the songs off this EP in our Neighborhood Session video series. The Ladles EP is the first official recorded release by these lovely local ladies, a mix of traditional folk, neo-soul-folk, and “downer love songs.” Though, if you’ve heard them live you’ll know that even those are somehow sung with a smile. “Though the all-women band arrangement is something The Ladles take pride in, their final track (a jazzier number called “Kidding Me”) is proof they aren’t afraid to expand their sound when necessary, bringing on bassist Isaac Levien and drummer Aaron Edgcomb to build a stronger sense of rhythm. But even with the expanded setup, it’s the female vocals that are the driving force. Banjoist Caroline Kuhn and fiddle player Lucia Pontoniere lay down a bed of harmonies as Katie Martucci sings, ‘Don’t worry, I’m an artist, I’m sure I’ll turn this into something beautiful.’ “Well, they sure did.”