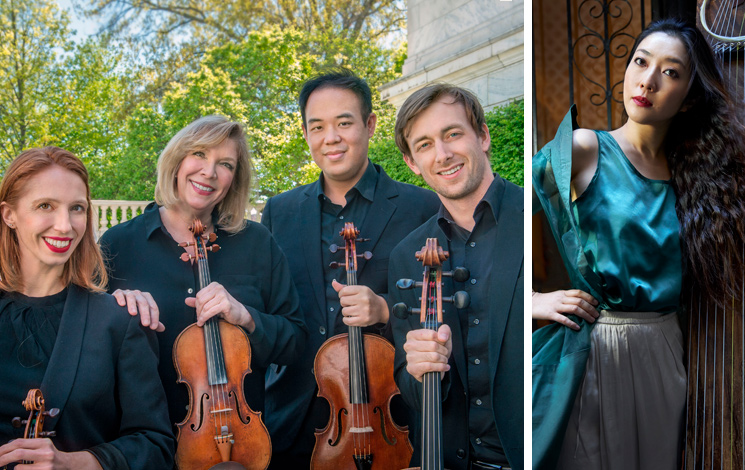 Described by the Washington Post as “completely engrossing powerful and elegant” The Cavani Quartet has dedicated its artistic life to communicating the joy of discovery in the service of some of the most powerful music ever written.

“Their artistic excellence, their generous spirit, and their fervent ambassadorship for great music make them unique among America’s greatest string quartets. They may be the single most valuable role model for the classical chamber music field in our time, an inspiration to fellow musicians and audiences across the country.” ~Detroit Chamber Music Society

An award-winning Koto star from a young age, Yumi Kurosawa is one of today’s most exciting soloists on Japan’s national instrument. Born and raised in Japan, she started studying the Koto when she was three under her parents Kazuo & Chikako Kurosawa. She started studying 21 strings Koto under Nanae Yoshimura when she was 15 years old. Ms. Kurosawa received first prize at the National Japanese Koto Competition in 1989 and 1992, and a scholarship from The Agency for Cultural Affairs of Japan in 1998. She toured U.S., Canada, Malaysia and Russia. Her extensive performances in Japan have included appearances at Suntory Hall in Tokyo, and on NHK Broadcast TV programs.