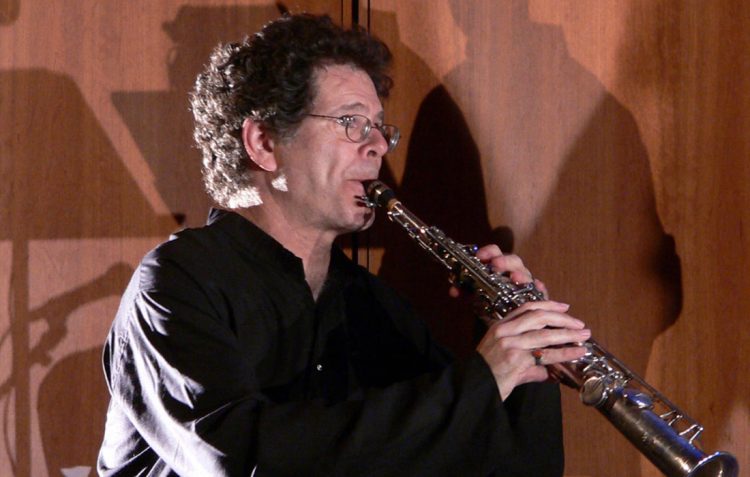 The program will be announced from the stage.

There will be an intermission.

Grammy winner and five-time Grammy nominee Steve Gorn is creating a new idiom, a music that combines the essence of classical Indian tradition with a contemporary world music sensibility. The strength of this music arises from a virtuoso mastery, generating a vibrant fusion, alive and accessible to western ears. From Indian classical music to world music and jazz projects with Paul Simon, Jack DeJohnette, Paul Winter, and others, Steve infuses great mastery with a haunting, lyrical sweetness to bring the healing breath of the sacred to our demanding contemporary lives.

Steve’s first steps on this path were taken as a young jazz musician studying composition at Penn State. He noticed how John Coltrane and Charles Lloyd had begun to incorporate aspects of Indian music into their playing. He investigated modal music and listened to Bismallah Khan, who played the shenai (Indian oboe), and to Ravi Shankar and Ali Akbar Khan, who were then only beginning to become known to Western audiences. Drawn by these sounds, he followed the music east and found himself in Benares, India, in 1969, in a boat on the Ganges with the famous sarangi master Gopal Misra, listening to his classical raga float out over the water in the evening light. “I suddenly saw how this music went beyond notes, beyond what we think of as music. How it is, in truth, a yoga, a form of meditation, devotion, a form of love.”

In Benares, Steve studied shenai with a local teacher and then traveled to Calcutta, where he was invited to meet the Bengali bansuri master Sri Gour Goswami. “We went to Hedwa in North Calcutta, passing through narrow lanes lined with sweet shops, tea stands, and sari merchants. Bells were ringing from small neighborhood temples, and the air was thick and pungent with everything from sandalwood incense to cow dung. We were directed to a doorway that led along a corridor into a small courtyard. A servant motioned to a room on the south end of the courtyard and we entered the stone compound.

“Seated on the floor, in a circle, were six men all dressed in white. In the center of the circle was a robust middle-aged man, his feet tucked under his dhoti, his lips red from the betel-nut he was chewing. A cup of tea was at his side and a harmonium and a flute case lay on the floor before him. This was the teacher I had heard so much about. I was introduced in Bengali (although I learned later that these men spoke fluent English) and they proceeded to talk about me at length in a language I couldn’t understand. I stood there, grinning awkwardly, being discussed as if I were a specimen from Mars. Finally, the master looked at my flute case and said, ‘So, let me see your flute.’ I took it out and gave it to him. He looked at it, shrugging his shoulders, ‘It’s not very good,’ he said, ‘it’s not made right.’ I started to say something but he continued, ‘Who did you learn from?’ When I told him he let me know that I had learned from an insignificant person.

“I was becoming annoyed at being so readily dismissed. I wanted to play for him and show him what I knew, but they continued to sip their tea, conversing endlessly in Bengali. Finally, they asked me to play a raga for them. I was very nervous by then but managed to play. When I finished, Gour Goswami said, ‘You have a good sense for this music, but you have not been taught properly.’ He then took out his flute and played for me. The tone was deep, warm and velvety, utterly weightless. The raga unfolded and time stopped. It was breathtaking, as the passages came faster and faster, ending in a flourish of cascading sound that reverberated through the stone room. And then it was over and everyone was once again drinking tea. I just sat there, stunned. I looked at him and stuttered, ‘May I come back?’ He smiled and said, ‘Yes.’”

Returning to the US, Steve continued his study of Indian music with Pandit Raghunath Seth. He started bringing his elegant bansuri sound to American pop music, influencing a wide range of musicians. He recorded with Paul Simon, Richie Havens, Paul Winter, Jack DeJohnette, Glen Velez, and many others. Deepak Chopra, Krishna Das, Coleman Barks, Jai Uttal, Jerome Robbins, and Julie Taymor are among those who have sought out his virtuoso bamboo flute. He has composed for film, television, dance, and theatre, and performed in concerts and festivals throughout the world, drawing from classical Indian sources, jazz, and world music to create a distinctive signature sound.

His landmark world music recording Asian Journal and the unique Wings and Shadows have become cult favorites, and his acclaimed CD Luminous Ragas was named one of the top ten recordings of the year by Los Angeles Reader.

In 1996, Steve returned to India to perform at a seminar titled Indian Music and the West, at the Sangeet Research Academy in Mumbai. SRA West Chairman Arvind Parikh said, “Steve Gorn’s concert was widely appreciated for its outstanding musicianship…and has won him a host of admirers.” In 1998, Steve again returned to India, and performed to enthusiastic audiences at The Nehru Center, NCPA, and the Dadar Matunga Music Circle in Mumbai.

Indian classical music is a supreme art form, highly acclaimed for its esthetic quality, intricate technique, and sublimity. As an accomplished successor to this musical heritage, Sanjoy Banerjee has stepped masterfully into this field and with his sonorous voice has enthralled audiences at home and abroad.

Born in a musical family, Sanjoy started showing signs of exceptional talent from a very tender age. He was initiated into music by his aunt, Smt. Basanti Chatterjee, and Smt. Manjulika Dasgupta. He studied with Sri Ramanuj Dasgupta, and for advanced training went to Pandit Narayan Rao Joshi, of the Kirana Gharana lineage and style. Sanjoy was a favorite disciple until his guru’s death.

In 1989, Sanjoy began studies with Pandit A. Kanan, a stalwart of the Kirana Gharana, to learn the intricacies of Indian classical music. In 1995, he joined the prestigious ITC Sangeet Research Academy to study in the Guru Shishya Parampara method. He began with Pandit Kanan, and later studied as a scholar with Sangeet Vidushi Malabika Kanan, who saw the young musician’s potential and acknowledged Sanjoy as the “worthy successor” of her musical heritage.

Today, Sanjoy is a busy artist, performing in India, Bangladesh, the UK, Germany, Canada, and the US as one of the leading young musicians of Kirana Gharana. Sanjoy is also a regular artist of All India Radio and Doordarshan (TV).

Sanjoy is also a successful teacher, with students in India, Bangladesh, Germany, the UK, and the US. He is much sought after as a composer and music director. His Indian Festival Group worked in several projects in India and the UK. Sanjoy was a senior guru at the American Academy of Indian Classical Music in New York. At present he is a guru at his own institution, Kolkata Surumurchhana in Kolkata and guru at Chhandayan center for Indian Music in New York City.

Samir Chatterjee is a virtuoso tabla player from India. He travels widely across the world throughout the year, performing in numerous festivals as a soloist or with other outstanding musicians from both Indian and non-Indian musical traditions. Samir performed several times at the UN General Assembly and at the 2007 Nobel Peace Prize ceremony in Oslo. His compositions are widely acclaimed, as are his writings. Samir is a firm believer in the transforming effect of music on society, and all aspects of his work reflect this conviction.

Chatterjee began his studies early with Pandit Bankim Ghosh, Pt. Balaram Mukherjee, Pt. Rathin Dhar, and Mohammad Salim. His later formation as a musician occurred under the guidance of Pt. Amalesh Chatterjee (since 1966) and Pt. Shyamal Bose (since 1984). All of Samir’s teachers have been from the Farrukhabad Gharana (school) of tabla playing, which he now represents.

Chatterjee lives in the Greater New York area, and has been a catalyst in the fusion of Indian and non-Indian music, in his own creations and those of others. He has performed with Pauline Oliveros, Branford Marsalis, Ravi Coltrane, Dance Theater of Harlem, the Boston Philharmonic, the Minnesota Orchestra, Ethos percussion group, Da Capo Chamber Orchestra, Boston Musica Viva, and other jazz, classical, and avant-garde musicians and ensembles.

Chatterjee is a member of the jazz trio SYNC with Ned Rothenberg and Jerome Harris, and the quintet Inner Diaspora, which includes Mark Feldman and Eric Friedlander. He collaborates with Pakistani Sufi-rock singer Salman Ahmad of the group Junoon, and he is the composer and director of Indo-Flame, an Indian and Flamenco fusion dance and music ensemble. Chatterjee performs with Sanjay Mishra on his CD Blue Incantation, which also features the late Jerry Garcia. He has recorded with Peter Gabriel, Joshua Bell, Melissa Etheridge, and Keller Williams, and has shared the stage with Sting, Elton John, James Taylor, Alicia Keys, Earth Wind and Fire, Annie Lennox, and many others.

Samir Chatterjee has been teaching for the last thirty-five years. He is the Founder/Director of Chhandayan, an organization dedicated to promoting and preserving Indian music and culture. He has authored the comprehensive volume A Study of Tabla and a guide book to Indian music, Music of India. He is on the faculty at Yale University, the Manhattan School of Music, the University of Pittsburgh, the New School for Jazz and Contemporary Music, and the University of Bridgeport.