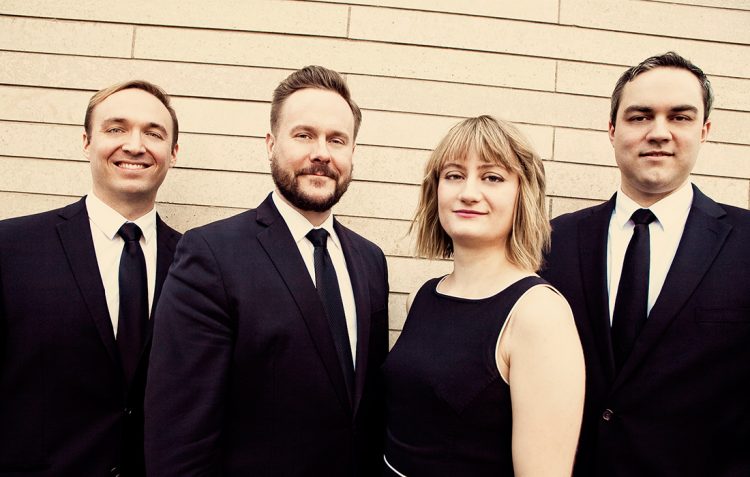 A Maverick Debut
The New Foundations project is supported in part by a grant from the National Endowment for the Arts.

Maverick Debut New Foundations IV New Foundations: Toward a Modern Chamber Music Repertoire is a mini-festival of chamber music composed  in the last thirty years. The series is supported in part by an award from the National Endowment for the Arts.

Spektral Quartet actively pursues a vivid conversation between exhilarating works of the traditional canon and those written this decade, this year, or this week. Gramophone described its most recent album as “highly interactive, creative, and collaborative…unlike anything its intended audience—or anyone else—has ever heard.” Spektral is known for creating seamless connections across the centuries, drawing in the listener with charismatic deliveries, interactive concert formats, an up-close atmosphere, and bold, inquisitive programming. The foursome’s most ambitious recording project to date, Serious Business, was released in 2016 and nominated for a 2017 Grammy award. Alex Ross of The New Yorker called it “a delirious new record,” and Serious Business is indeed an intrepid exploration of the many-sided face of humor in classical music, featuring vibrant premieres of music by stunning young composers Sky Macklay, David Reminick, and Chris Fisher-Lochhead, paired with a centuries-old gut-buster, Haydn’s Quartet Op. 33 No. 2, “The Joke.” The quartet’s multi-city tour of Beat Furrer’s String Quartet No. 3 and Bagatellen, a new work by Hans Thomalla, “proved that they have everything: a supreme technical command that seems to come easily, a capacity to make complicated music clear, and, most notably on this occasion, an ability to cast a magic spell” (The New York Times). Spektral Quartet enthusiastically seeks out vehicles to bring classical music into the sphere of everyday life, prioritizing immersion and inclusivity through close-proximity seating and intimate, unconventional venues. Major upcoming projects include Morton Feldman’s notorious six-hour String Quartet No. 2 at Chicago’s Museum of Contemporary Art and the Toledo Art Museum; the quartet’s Italian debut in Rome; the recording of new works by composer Anthony Cheung; and a major new initiative on Chicago’s South Side in collaboration with multidisciplinary artist Theaster Gates. The season will also see dynamic new programs pairing works of Ravel, Beethoven, and Mendelssohn with the voices of emerging composers, and new works by George Lewis, Augusta Read Thomas, Samuel Adams, and Tomeka Reid. The ensemble is regarded for forward-thinking endeavors such as Mobile Miniatures, which rallied, from across the nation, more than forty composers, including David Lang, Augusta Read Thomas, Nico Muhly, and Shulamit Ran, to write ringtone-length pieces available for download to mobile devices. As ardent advocates for new music in their home city, the group recorded its debut album, Chambers (Parlour Tapes+), in 2013, featuring works by dynamic, Chicago-based composers. Other discography includes a recording with Third Coast Percussion of Selene, an octet by Augusta Read Thomas for the album Of Being Is a Bird; and From This Point Forward, an exploration of nuevo tango and Latin jazz with bandoneon virtuoso Julien Labro. It is central to Spektral Quartet’s mission to cultivate a love of, and curiosity for, unfamiliar sonic territory and exceptional works of the past among the next generation of string players. Currently ensemble-in-residence at the University of Chicago, the quartet has also participated in residencies at the New World Symphony (Miami Beach), Stanford University, Northwestern University, University of Wisconsin–Milwaukee, and the Walden School (New York City), among others.

All program notes are copyright Miriam Villchur Berg. It is permissible to quote short excerpts for reviews. For permission to quote more extensive portions, or to copy, publish, or make other use of these program notes, please contact her at miriam@hvc.rr.com.