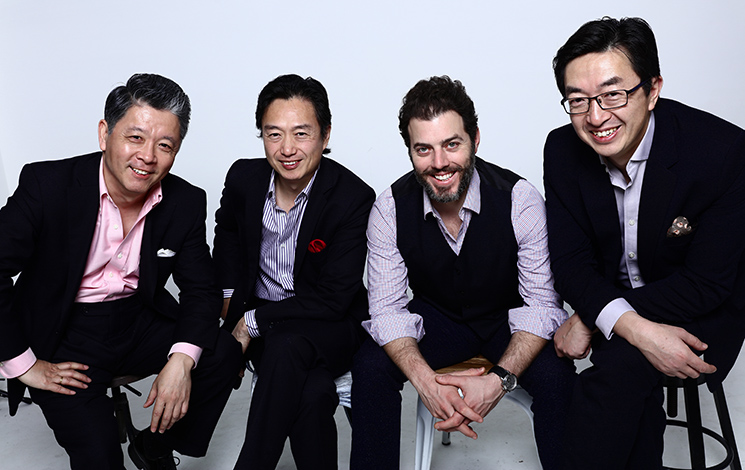 A Maverick favorite for over 25 years and renowned for its passionate musicality, impressive technique and multicultural innovations, the Shanghai Quartet has become one of the world’s foremost chamber ensembles. Its elegant style melds the delicacy of Eastern music with the emotional breath of Western repertoire, allowing it to traverse musical genres including traditional Chinese folk music, masterpieces of Western music, and cutting-edge contemporary works.

The Shanghai Quartet has been coming to Maverick annually for longer than any other performers on our current roster. Founded in 1983 at the Shanghai Conservatory of Music, the Shanghai Quartet has won a worldwide reputation for their combination of Eastern elegance and Western emotional power. They became the first Chinese group to win a major international quartet contest (in London), which launched their world career. Described by The New York Times as “utterly sublime,” they have performed at most of the world’s major halls and chamber music festivals, and have commissioned works from many noted contemporary composers. They have also appeared in Woody Allen movie Melinda and Melinda, and a documentary is currently being made about their busy lives and worldwide performing schedule.

Weigang Li, first violin, founded the quartet with his brother, violist Honggang, when both were students at the Shanghai Conservatory. The brothers were born into a musical family. Weigang began his studies at five, and was ready for the Shanghai Conservatory at fourteen. He first came to the United States in 1981 as a student in San Francisco and later at Northern Illinois University. Weigang went on to study and teach at The Juilliard School as teaching assistant to the Juilliard Quartet. He now teaches violin at Montclair State University in New Jersey. Yi-Wen Jiang, second violin, was born in Beijing, also to a musical family, and studied with his father from age six. In 1985 he came to this country to study with Pinchas Zuckerman and with Arnold Steinhardt of the Guarneri Quartet. Yi-Wen is also a composer, and has arranged many traditional Chinese works for quartet and written many pieces that bridge the musical gap between East and West. When Honggang Li and his brother founded the Shanghai Quartet, Honggang played second violin; he switched to the viola when a previous violist left the ensemble. He began studying the violin at age seven. Honggang has a degree from Northern Illinois University and is on the faculty at Montclair and serves there as artist-in-residence. Cellist Nicholas Tzavaras is the only Westerner in the Quartet. Born in Spanish Harlem, he began as a violin student, switched to the cello at eleven, and graduated from the Bronx High School of Science before getting music degrees from the New England Conservatory and the State University of New York at Stony Brook. Nicholas can be seen in the Academy Award nominated documentary Small Wonders, and he is portrayed in the motion picture Music of the Heart starring Meryl Streep.

Antonín Dvořák’s tenth string quartet, published as his Op. 51, was the first of his works in this vein to become widely known and frequently played, and it’s not hard to see why. It was commissioned by Jean Becker, leader of the Florentine Quartet, who wanted a “Slavic” chamber work to follow on the huge international success of the composer’s Slavonic Dances. What Becker received was a piece that had a much more Slavic character than Dvořák’s previous quartets. The opening movement begins with a kind of hurdy-gurdy sound from the lower instruments while a reflective violin solo plays above. The material is richly developed, but the tone of the music is rather placid and pastoral, with occasional strong rhythmic interruptions. It finishes in a quiet, meditative mood. The second movement is one of Dvořák’s irresistible Dumka dances (as in the famous trio that bears that name). The main theme is rather melancholy, with plucked chords from the cello, but there is a brighter, dancing scherzo section that appears twice. This is the movement that most clearly inspires the “Slavic” title the work is sometimes given. The Romanza is another rather sad movement that ruminates quietly and sweetly in both minor and major keys. The Finale is very different, a sprightly rondo with a syncopated main idea. There are several counter-themes and bursts of fugue-like development, all instruments combining to make a big, almost orchestral sound, especially in the exhilarating coda.

Tan Dun is probably the best-known Chinese composer at work today, with a very large output that includes the Academy Award-winning score to Ang Lee’s film Crouching Tiger, Hidden Dragon. Tan Dun was recently appointed dean of the Bard College Conservatory of Music. His quartet Feng Ya Song was the work that first brought him to international attention when it won second prize at Dresden’s Weber Competition in 1983. Tan Dun wrote the piece while he was a student at the Beijing Conservatory. The composer was accused of “spiritual pollution” by the hard-line Chinese authorities of the time, for his admixture of Chinese and Western elements in the piece, and Feng Ya Song was little heard for many years. Only a Chinese recording existed. Now, working closely with the Shanghai Quartet under the auspices of Dartmouth College, the composer has substantially revised and shortened the piece. The Shanghai Quartet premiered the new version at Dartmouth and has already programmed it several times this year, including a performance in China in March. The title of the quartet, which translates as “Ballad, Hymn, Ode,” suggests the styles of folk song, ritual music, and art song, respectively. The original version was said to have been in the conventional four-movement sonata form, and to employ the four instruments at times to suggest the sound of traditional Chinese instruments. So far, only the Shanghai’s performances of the revised work have been heard, and it still represents the fusion of Chinese and Western elements the authorities originally complained of—a complaint unlikely to affect Maverick listeners.

Ludwig van Beethoven’s Quartet No. 12, Op. 127, is the first of his celebrated series known as the Late Quartets, widely considered the peak of quartet writing on account of their huge inventiveness and often deeply personal and inward emotional states. Beethoven had not written a quartet for several years when in 1822 he was commissioned by an admirer, Prince Nikolai Galitzyn of St. Petersburg, to compose “one, two, or three new quartets.” Beethoven was willing, but a start on them was delayed by his work on three other huge compositions, the Missa Solemnis, the Ninth Symphony, and the Diabelli Variations for piano. In the end, Op. 127 was not ready until early 1825, and Beethoven had only two more years to live, which he devoted exclusively to writing five ineffable quartets and the Grosse Fugue, the “Great Fugue” that was originally intended as the finale of Op. 130. Ironically, he received only one payment of the promised amount from Galitzyn, who adored the quartets but who then lost all his money and went into the army. The story ended better after all: Galitzyn’s family paid the balance owed into Beethoven’s estate after the composer’s death.

The late quartets show Beethoven moving radically away from his earlier heroic, assertive style toward a reflective stillness, a sense of profound acceptance of the world and its sorrows that has deeply affected generations of music lovers. In fact, these quartets have been written about and scrutinized perhaps more than any other music ever written. It is surely no surprise that at this stage in his life the composer was deeply interested in Hindu and Brahman philosophy, and copied quotations from many sacred texts into his notebooks. The first movement of Op. 127 is a fine example of this new philosophical outlook: After a series of assertive chords that could have come from the opening of the Eroica symphony, the music moves into a tender, reflective theme that, richly developed, dominates the rest of the movement. Twice more the heroic chords are sounded, but the answer is a peaceful resignation. The second movement, by far the longest in the work, begins with a quiet, prayerful song that is the essence of late Beethoven’s Innigkeit, or inwardness. This goes through a series of exquisite variations that are by turns playful, elegiac, and joyful. Toward the end the music sinks to a hushed intensity the listener has to strain to hear—but with vast rewards. The Scherzando begins with a four-note pizzicato that sounds throughout the movement, then launches a quick, flighty theme that is swiftly passed among the instruments and developed at length. Several fierce chords bring this to an end, before the music flies off into a dizzying prestissimo coda that recalls wisps of the main theme. The last movement begins with a lusciously flowing theme that seems to have no end, a sort of divine perpetuum mobile. This is finally concluded with a series of trills and arpeggios that introduce quick reminiscences of the main theme before the music broadens into a powerful coda that seems not so much a matter of triumph as of joyful accord with the spirit of the universe. A listener can hardly fail to have his spirit lifted, and the quartet is a fitting beginning to a series that marks one of music’s great adventures.