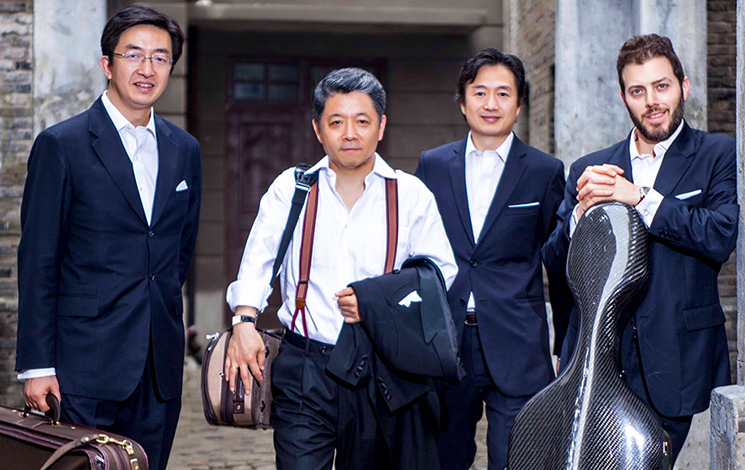 FINAL CONCERT OF THE SEASON

This Concert is Dedicated in Loving Memory to
Miriam Villchur Berg
January 9, 1948–September 5, 2017
Our Dear Friend, Program Annotator, and Benefactor

Renowned over four decades for its passionate musicality, impressive technique, and multicultural innovations, the Shanghai Quartet is one of the world’s foremost chamber ensembles. Its elegant style melds the delicacy of Eastern music with the emotional breadth of Western repertoire.

Formed at the Shanghai Conservatory in 1983, the Quartet has worked with the world’s most distinguished artists and regularly tours the major music centers of Europe, North America, and Asia. The Quartet has performed regularly at many of North America’s leading chamber music festivals, returning to Maverick Concerts every summer for more than two decades.

The Quartet has a long history of championing new music and juxtaposing Eastern and Western traditions. The Shanghai has an discography of more than thirty recordings, the most popular of which is Chinasong, a collection of Chinese folk songs arranged by Yi-Wen Jiang (the Shanghai’s second violinist); the pieces reflect on his childhood memories of China’s Cultural Revolution.

The Quartet made a cameo appearance playing Bartok’s String Quartet No. 4 in Woody Allen’s film Melinda and Melinda. Violinist Weigang Li appeared in the documentary From Mao to Mozart: Isaac Stern in China, and cellist Nicholas Tzavaras and his family were the subject of the film Music of the Heart, starring Meryl Streep.

The Shanghai Quartet currently serves as Quartet-in-Residence at the John J. Cali School of Music, Montclair State University in New Jersey; Ensemble-in-Residence with the Shanghai Symphony Orchestra; and visiting guest professors of the Shanghai Conservatory and the Central Conservatory in Beijing. They are proudly sponsored by Thomastik-Infeld Strings.

One of the most sought-after soloists in his generation of young American musicians, the pianist Orion Weiss has performed with the major American orchestras, including the Chicago Symphony, Boston Symphony, Los Angeles Philharmonic, and New York Philharmonic. His deeply felt and exceptionally crafted performances go far beyond his technical mastery, and have won him worldwide acclaim.

In 2010, Weiss was named Young Artist of the Year by the Classical Recording Foundation. In the summer of 2011, Weiss made his debut with the Boston Symphony Orchestra at Tanglewood, as a last-minute replacement for Leon Fleisher. In 2005, he toured Israel with the Israel Philharmonic Orchestra conducted by Itzhak Perlman.

Weiss is known for his affinity and enthusiasm for chamber music, and he performs regularly with his wife, the pianist Anna Polonsky, the violinists James Ehnes and Arnaud Sussmann, and cellist Julie Albers, as well as prominent chamber ensembles. As a recitalist and chamber musician, Weiss has appeared across the US at venues and festivals including Lincoln Center, the Ravinia Festival, Chamber Music Northwest, the Bard Music Festival, the Kennedy Center, and Spivey Hall.

The String Quartet No. 11 in F Minor, Op. 95, which Beethoven himself gave the title “Serioso,” is more idiosyncratic and introspective than his earlier works. The opening gesture of the first movement (Allegro con brio) is followed four bars later by the same theme moved up one half-step and set into a major key. Melodic sections throughout the movement are periodically interrupted with sharp forte exclamations. There is very little transitional material, and the final cadence is extremely brief by Beethoven’s standards.

The second movement (Allegretto ma non troppo) starts with a descending scale motif by the solo cello that returns several times throughout the movement. After a melodic section, the viola introduces a fugue on a chromatic theme. The earlier melodic section returns and is further developed, but the cadence is merely a brief respite, followed immediately by a diminished chord that drives us forward into the next movement with the indication attacca, i.e., to continue to the next movement without pause.

The third movement (Allegro assai vivace ma serioso—Fairly lively but serious) gives the quartet its name. The stormy sections start here, with dotted rhythms and chords cut short. The contrasting B section has a fluid melody that is played by different instruments in turn. Instead of ABA (scherzo-trio-scherzo), Beethoven makes the pattern ABABA. The battle between dark and light moods requires more than just one confrontation.

The final movement starts with a slow introduction (Larghetto espressivo) followed immediately by a fast, tense section (Allegretto agitato). The same isolated notes and abruptly stopped chords here take on a light, dancing feeling. The cadence changes the key from F minor to F major, and the coda gives us even faster runs and dramatic crescendos before racing to the loud, bright finish.

Krzysztof Penderecki (pronounced pen-der-ET-skee) is a renowned Polish composer and conductor. He has taught at Yale, at the Berlin Academy, and at the Academy of Music in Kraków. His most famous composition is an oratorio, the St. Luke Passion. Although avant-garde purists found this work troublesome—it is atonal throughout, but it ends on a triumphant major chord—the piece has proven extremely popular with the general public. Penderecki’s early works were highly experimental—one piece is scored for two orchestras tuned a semitone apart—but more recently he has incorporated more standard musical ideas into his compositions.

Penderecki’s String Quartet No. 3, “Leaves of an Unwritten Diary,” was commissioned for the Shanghai Quartet by the Modlin Center for the Arts at the University of Richmond, (Virginia) where the Shanghai held a long residency, and by Montclair State University in New Jersey, where the group is currently quartet-inresidence. The world premiere was part of a three-day celebration in Poland in honor of the composer’s seventy-fifth birthday.

Shanghai cellist Nicholas Tzavaras wrote of this work, “Both the public and the press seemed to think this work will become a major part of the quartet literature and perhaps be considered one of his greatest chamber works…. Starting with an almost grave intro, it heads directly to a driven vivace in G minor which surfaces through the entire piece. Soon a beautiful waltz surfaces, followed by a poignant notturno, then back to the vivace pattern, which Penderecki wanted ‘faster, faster.’ By the end we could barely play all the notes in the new furious tempo. At the end a spectacular gypsy melody surfaces. We asked Maestro Penderecki about it, and he told us that it is a melody that his father used to play on his violin, perhaps a Romanian melody, he thought. At the climax all of these themes surface and collide in a powerful moment that is full of intensity and drama. The end is soft, almost walking away into the distance, with harmonics echoing the gypsy melody at the very end.”

At the age of fifty-seven, Johannes Brahms decided he had accomplished enough, and he could now relax. He wrote that this realization made him so happy that he was re-energized and immediately began composing again. His last few pieces were written at his summer home in Bad Ischl (a spa town in Austria), and include the Eleven Chorale Preludes for organ. They were
published posthumously as Op. 122; Ferruccio Busoni transcribed several of them transcribed for solo piano in 1902. Brahms’s treatments of the chorale tunes share much with those of J.S. Bach, in their use of counterpoint and their ornate figuration of fast notes surrounding the slower chorale theme. But Brahms’s harmonies often reveal his innovative and unmistakably Romantic leanings.

In a piano quintet, a composer can treat the piano as just another voice in the ensemble by giving it a single melody (often with a simple harmony), or set the piano apart as a separate entity against (or with) the string quartet as a whole. Dvořák uses both techniques in his Piano Quintet in A Major, Op. 81, creating an exquisite balance where all parts are heard, both as soloists and as an ensemble.

Dvořák’s Slavonic heritage is evident from the outset, with the first theme of the Allegro announced by the cello. The sweetness of A major is tempered by an immediate switch to A minor, and by the continuation of the minor into the melancholy second theme, presented by the viola. This fairly long movement goes through many changes of mood before the rousing finish.

The piano opens the second movement with a ballad refrain, with the viola adding a mournful melody beneath it. An abrupt change brings in a violin dialogue and a light, tripping theme. This Dumka—an elegiac Slavic folk lament—has a central section that is lively and exciting before returning to the darker mood. The final cadence descends to the depths of the cello’s range.

The Scherzo is marked Furiant, a fast Moravian folk dance. In the trio section, Dvořák uses some of the same material in a slower tempo, giving it a wistful romantic quality. The furiant returns (though in a different key) to complete the symmetry of the movement.

A dialogue between violin and piano opens the Finale: Allegro, at first in short chattering notes, then again in a warm, melodious theme. The chattering tune becomes the basis of a fugato, with each part playing it in overlapping turns. The piece ends with a majestic series of rising notes that outline the major key.