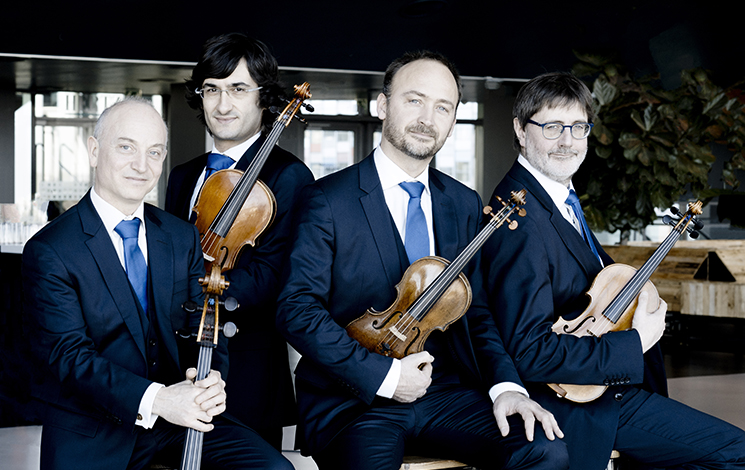 The Quatuor Danel was founded in 1991 and is famous for their bold, concentrated interpretations of the string quartet cycles of Haydn, Beethoven, Schubert, Shostakovich, and Weinberg. Their lively and fresh interpretations of the traditional quartet repertoire have earned rave reviews from the public and press alike. Quatuor Danel is a regular guest at festivals such as Ottawa, Kuhmo, Cork, Lofoten, Schleswig-Holstein, Bregenz, Schostakowitsch Tage Gorisch, Luzern Zaubersee, Sakharov Festival, Richter Festival, Enescu Festival, Fayence, Luberon, Montpellier, Folle Journée de Nantes and Musica Mundi.

This concert is dedicated to the loving memory of the late Rev. David Louis Bronson.

This concert is dedicated to our former board member and trustee, the late Rev. David Louis Bronson.

The Quatuor Danel, founded in Belgium in 1991, had been a major group on the European scene long before they made their 2015 U.S. debut. Today marks their Maverick debut. The ensemble has been in residence for many years at the University of Manchester in the United Kingdom; they have also had a residency in Utrecht and begin another at London’s Wigmore Hall this year. They are particularly noted for their performances and recordings of the Shostakovich quartets, and they have an unusual specialty in the seventeen quartets of Mieczyslaw Weinberg, a Shostakovich protégé. The founding members of the quartet are Marc Danel and Gilles Millet, first and second violins. Violist Vlad Bogdanas came aboard in 2005, cellist Yovan Markovitch five years ago. Danel studied at the Lille Conservatory in France and also in Brussels. He has played with the Amadeus and Borodin quartets, and has taught in Belgium, in France, and at the Royal College of Music in London. Millet won a major prize when he was fourteen, and began studies at the Paris Conservatory a year later. He is a visiting professor at the Lyon Conservatory and at Namur, Belgium. He regularly conducts master classes in the United States, Asia, and Europe. Bogdanas learned the Romanian tradition of string playing from his mother, and studied in Paris and The Hague before joining the quartet. Markovitch, born in France, went on to study in Paris and later with Aldo Parisot at Yale. He joined the Ysaÿe Quartet in 2005 and the Danel in 2014.

Ludwig van Beethoven had a number of sonatas and smaller-scale chamber works behind him when, at the end of the eighteenth century, he began writing string quartets. He studied the quartets of Haydn and Mozart intensively. He sent the first version of his first quartet to a friend, but asked him not to distribute it, explaining that, “I have just now learned how to write a quartet.” He revised it extensively, vastly improving it in the process. (We know this because the older version still exists.) It is a remarkable work for so young a composer, and difficult to play, with very fast tempos, elaborate phrasing, and sudden shifts in mood. It was not the first in the set to be written, but the composer placed it first because he thought that its large scale and its profound slow movement would make the most impressive introduction to Op. 18. Indeed, it is often considered the most accomplished of the entire set. The quartet begins with a brusquely cheerful gesture, which receives a more tuneful reply. These two ideas are then extensively developed; the whole effect of the movement is breezy and impetuous, with a lot of swift pyrotechnics in the upper strings. The second movement could not be more of a contrast. Said to have been inspired by the funeral scene in Shakespeare’s Romeo and Juliet (Beethoven was a keen reader of the Bard), it is deeply mournful. The music, ever slow, rises toward the end to a passionate climax, with agonized phrases that seem as if the composer is crying out against fate; what was to become a familiar posture in later Beethoven is heard here for the first time. The scherzo that follows is a relief, certainly, but not quite as brisk and high-strung as such movements often are. The trio features a motif that ascends ever higher, with the first violin developing virtuoso flourishes against octave leaps by the other instruments. The last movement, sunniest of the four, begins with a perky idea that is developed with skill worthy of Mozart; its brief bursts of fugato writing are a fine example of Beethoven’s new-found deftness. It rounds off the quartet with an example of classical elegance that has, at the same time, a sense of impetuous energy; it was very clear that a very fresh voice had arrived on the scene.

The Czech composer Leoš Janáček was a late bloomer; most of the works by which he is best recognized were written in the last few years of his life, after he had developed an intense but unrequited passion for a married woman, Kamila Stösslová. Janáček was a Russophile who idolized the works of Leo Tolstoy; and when he read that master’s novella The Kreutzer Sonata, he was deeply affected. The story was about the power of music and about how a woman had been wronged, both major preoccupations of Janáček’s. It tells the tale of a man who boasts of how he killed his wife, believing that she was having an affair with a violinist with whom she had been playing Beethoven’s celebrated sonata, both of them intoxicated by the music. Janáček was so taken with the story he wrote an early piano trio based on it. That work has been lost, but it was the source of much of the material in his 1923 quartet, which he wrote in less than two weeks in a fever of inspiration. Quite apart from its unusual literary-musical origins, it is a remarkable work. Janáček is best known for his operas and his choral writing, and the inflections of the human voice lie always just below the surface in his instrumental writing. There is virtually no formal sonata shape about the quartet. It is like a miniature opera for the instruments, constantly dramatic and with many striking string effects that demand considerable virtuosity. It is also a study in perpetual motion: There are literally dozens of tempo changes in the course of a work that lasts only about sixteen minutes. It begins with a plangent theme that suggests the woman at the heart of the story; this is answered by a rather skittish violin solo, probably her violinist lover. At one point they seem to play together, but there are clear indications of unease, as if she is fearing the worst. The second movement carries forward the threat from her husband in a series of tremolos, notes played sub ponticello (between the bridge and the tailpiece), and slashing unison chords. The disquiet is further escalated by frantic repeated runs from the violinist. The third movement carries the only overt reference to Beethoven’s Kreutzer Sonata—a version of the beautiful second theme from the sonata’s first movement, interrupted again by threatening ponticello flourishes. Violence ensues, and the end of the movement could be seen as the death of the woman. The last movement begins slowly and searchingly, as if looking back in sorrow. The music then speeds up into a tense race, before the sadness returns, and a strange descending four-note phrase leads to the end.

Like Janáček, César Franck was a late bloomer. All the works for which he is best known—the symphony, the Symphonic Variations, the violin sonata, the piano quintet (heard earlier this season) and the D-major string quartet (his only work in this form)—were written in the last few years of his life, though he had long been known as a stellar organist and teacher. The quartet’s premiere in 1890, only a few months before Franck’s death, was his first real triumph with the public; after its jubilant reception, Franck commented, rather bitterly, “The public seems to understand me at last.” A long-time fan, however, was the novelist and critic Marcel Proust, who in 1916 demanded a private performance. Proust sought out the leader of the prominent Poulet Quartet, and asked him to bring the members to his Paris house. When they arrived, late at night, he lit candles, covered himself with a large comforter, and asked them to play. He listened wordlessly—asleep, as far as they could tell—and when they had finished the forty-five-minute work, asked to hear it again. The exhausted musicians were naturally reluctant, but when he thrust a fistful of francs at them, they relented and played it again. It was near dawn when, after a breakfast of champagne and Proust’s favorite mashed potatoes, they finally left.

The first movement of the quartet caused Franck a great deal of trouble, and he worked at it extensively before he was satisfied. It begins with a slow introduction, the first violin leading with a long theme over a powerful accompaniment. This first major motif recurs throughout the quartet, in a cyclical manner typical of Franck. An allegro theme then develops—another cyclic element—before the opening lento is reprised as a minor-key fugue. The allegro returns more passionately, and then a series of tense modulations (“Modulate! Modulate!” Franck would tell his students) leads to a quiet, peaceful close. The second movement reminds us of Mendelssohn, with its flickering, shimmering lightness, a striking contrast to the first movement. There are pauses in this giddy music, as if in consideration, before it reaches a quiet pizzicato conclusion. The third movement, a larghetto, is straightforward and tuneful, relaxed and even languorous, with occasional flares of passion. In the last movement, Franck, taking a page from Beethoven’s playbook, reviews the themes of previous movements, treating some of them to fugal development. The long, densely woven movement seems to be heading toward a peaceful close, all passion spent, before it suddenly speeds up into a rather conventional and unexpected final flourish. It is, perhaps, too intense a work to hear twice in succession, no matter what Proust thought.