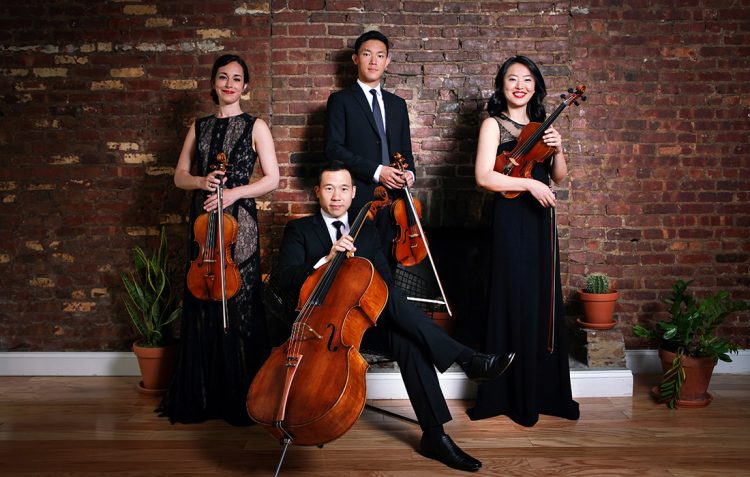 New Foundations IV
New Foundations: Toward a Modern Chamber Music Repertoire is a mini-festival of chamber music composed  in the last thirty years. The series is

Inspiring performances, luminous sound, and exceptional musicianship are the hallmarks of the Grammy Award-winning Parker Quartet. Renowned for its dynamic interpretations and polished, expansive colors, the group has rapidly distinguished itself as one of the preeminent ensembles of its generation. In demand worldwide, the Quartet has appeared at the most important venues worldwide since its founding in 2002.

Recent highlights include “The Schubert Effect” project in collaboration with pianist Shai Wosner at the 92nd Street Y; the premiere of a new string quartet by American composer Augusta Read Thomas as part of the Quartet’s four-concert series at Harvard University; a performance as part of the Lincoln Center Great Performers series; a concert in the Slee Series at SUNY Buffalo with jazz pianist Billy Childs; and appearances at Carnegie Hall and the Library of Congress. The Quartet also continues to be a strong supporter of violist Kim Kashkashian’s project Music for Food by participating in concerts throughout the United States for the benefit of various food banks and shelters.

The Quartet’s debut commercial recording, Bartók’s String Quartets Nos. 2 and 5, won praise from Gramophone. Their recording of György Ligeti’s complete works for string quartet won the 2011 Grammy Award for Best Chamber Music Performance. In 2015, the group released the world premiere recording of American composer Jeremy Gill’s Capriccio, which was written for the Quartet through a Chamber Music America commissioning grant. In 2016 they released the world premiere recording of Augusta Read Thomas’s Helix Spirals for string quartet.

Founded and currently based in Boston, the Parker Quartet’s numerous honors include winning the Concert Artists Guild Competition, the Grand Prix and Mozart Prize at France’s Bordeaux International String Quartet Competition, and Chamber Music America’s Cleveland Quartet Award. Now Blodgett Artists-in-Residence at Harvard University’s Department of Music, and also in residence at USC School of Music, the Quartet’s numerous residencies have included the University of St. Thomas, the University of Minnesota, the St. Paul Chamber Orchestra, and as the first-ever artists-in-residence with Minnesota Public Radio.

The Parker Quartet’s members hold graduate degrees in performance and chamber music from the New England Conservatory of Music and were part of the conservatory’s Professional String Quartet Training Program from 2006 through 2008. Some of their most influential mentors include the original members of the Cleveland Quartet, Kim Kashkashian, composer and pianist György Kurtág, and violinist Rainer Schmidt.

Igor Stravinsky’s father was an operatic bass in St. Petersburg, but allowed his son to study music only on the condition that he also study law. When his father died in 1902, Stravinsky dropped the law courses and became the private student of Nicolai Rimsky-Korsakov during the last three years of that composer’s life. Stravinsky’s early works caught the attention of the renowned ballet impresario Serge Diaghilev, and he asked Stravinsky to compose works for his Ballets Russes, then in residence in Paris. In three years, Stravinsky composed The Firebird, Petrushka, and The Rite of Spring (which was so shockingly innovative that there was a near riot at its premiere). Later in his life, Stravinsky’s music evolved through a neo-Classical stage, a period of composing religious music that incorporated medieval and Renaissance concepts, and a final period of serialism. Each of these styles was incorporated into his distinctive and unique musical voice.

Stravinsky was asked by Alfred Pochon, leader of the New York City-based Flonzaley Quartet, to write a piece for them to play on tour. Stravinsky writes: “M. Pochon wished to introduce a contemporary work into their almost exclusively classical repertoire, and asked me to write them an ensemble piece, in form and length of my own choosing, to appear in the programs of their numerous tours. So it was for them that I composed my Concertino, a piece in one single movement, treated in the form of a free sonata allegro with a definitely concertante part for the first violin.”

Although it is in one movement, the Concertino for String Quartet has sections of varying tempos, including two Andantes. The instruments play double stops (two notes with one bowing) throughout much of the work, giving it a thick texture that is in keeping with its rhythmic drive. Meter marks change sometimes from measure to measure, going from 2/4 to 11/4 and everything in between. The first violin is given a cadenza, with the sparest of accompaniment. Later in his career, Stravinsky arranged the work for solo violin with a small chamber ensemble as the ripieno (the role the orchestra takes in a concerto).

Aaron Jay Kernis studied the violin as a child, but at age twelve set about teaching himself piano and then composition. He studied at several major American conservatories, under important contemporary composers such as John Adams and Charles Wuorinen, but his style is his own. He has been given countless major commissions and awards, and his new compositions are eagerly anticipated by critics and audiences alike. Although he writes in a modern musical language, he incorporates familiar elements, including the sounds of classical and popular music, making his compositions very accessible. The String Quartet No. 2, “musica instrumentalis,” won the Pulitzer Prize in 1998.

The composer writes: “My Second String Quartet uses elements of Renaissance and Baroque dance music and dance forms as its basis and its inspiration. I have been playing various suites of Bach’s and pieces from the Fitzwilliam Virginal Book at the piano for my own pleasure for years, and I think that I had suspected for some time that their influence would eventually show up in my work.

“The first movement is a kaleidoscope, an overstuffed medley of many types of dances played separately and sometimes simultaneously. It is in three large sections. The first section is an exposition of many different strands of energetic music, while the second opposes two gentler dances, a canzonetta and a musette. The final section brings back most of the diverse elements from the opening in many varied guises and leads to a climactic uncovering of a simple direct version of the main tune of the movement.

“The second movement alternates two different slow sarabandes (a stately dance in triple time) with short bursts of frenetic, furious music. It is dedicated to the memory of Bette Snapp, a much-loved supporter of new music, and composers who passed away as the movement was being written.

“The final movement is based in some fundamental ways on the last movement of Beethoven’s Opus 59, No. 3, String Quartet. It is a propulsive and energetic double fugue, tarantella, rondo, gigue, and eventually a triple fugue, all wrapped in an overarching sonata form.”

Some composers, such as Beethoven and Stravinsky, are innovators, taking music into new and uncharted territories. Others, such as J.S. Bach, are synthesizers, refining the musical style of the day into an art form that exemplifies the era. Johannes Brahms was both. He sought to emulate the masters of the Baroque and Classical eras, at the same time introducing a harmonic language unlike anything that had ever been heard before.

Brahms’s last string quartet, the String Quartet No. 3 in B-Flat Major, Op. 67, has been nicknamed “The Horn,” for the sounds imitating the calls of hunting horns in the opening section. The first movement (Vivace) is lively in several ways: a fast tempo, a 6/8 meter, and bouncy dotted rhythms. At several points Brahms inserts pregnant pauses that announce dramatic shifts between the opening staccato theme and the lyrical countersubject.

Brahms was a consummate composer of vocal and choral music, and we see that skill in the slow movement (Andante). The opening melody is so cantabile (singable) that we may feel there should be lyrics. After a section of more forceful phrases that are traded back and forth within the ensemble, the movement ends as sweetly as it began, with a plagal cadence (like the “Amen” appended to a hymn).

For much of the third movement (Agitato: Allegretto non troppo), the viola plays the melody, with all the other instruments muted. It is in a triple meter, and there is a contrasting trio section, but that is where the resemblance to a classical minuet ends. Instead of the charming, measured, and predictable style of a dance movement, it has lopsided rhythms, syncopations, and an occasional competing duple meter. The Trio again gives the viola the lead, with the other parts playing a stop-and-start lilting accompaniment.

The final movement (Poco Allegretto con Variazione) makes use of one of Brahms’ favorite musical formats, the theme and variations. Although this type of musical organization had been common since the Renaissance, Brahms took the form in entirely new directions. Sometimes the original melody is barely recognizable, and all that remains is the phrasing and the harmonic underpinning (the chordal progressions). After several variations, he reintroduces the hunting horn motif from the first movement, replays the variation theme, and ends by seamlessly integrating the two.