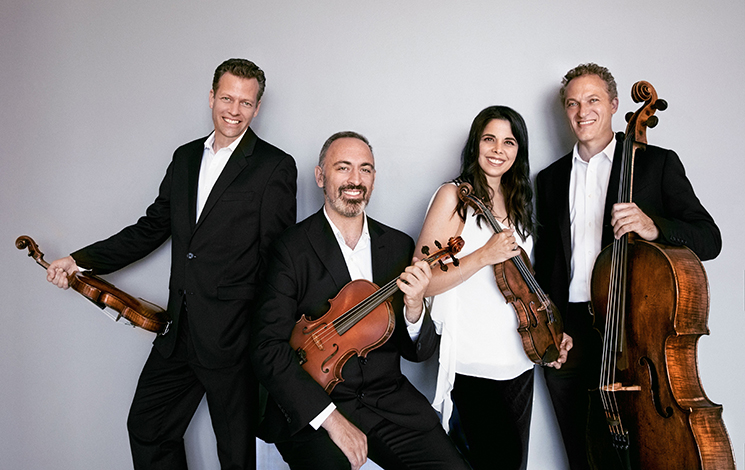 www.pacificaquartet.com
From Maverick to Woodstock: in the Spirit of the 60s X

Recognized for its virtuosity, exuberant performance style, and often-daring repertory choices, the Pacifica Quartet has achieved international recognition as one of the finest chamber ensembles performing today. Named the quartet-in-residence at Indiana University’s Jacobs School of Music in March 2012, the Pacifica was previously the quartet-in-residence at the Metropolitan Museum of Art and received a Grammy Award for Best Chamber Music Performance. In 2017, the Pacifica Quartet was appointed to lead the Center for Advanced Quartet Studies at the Aspen Music Festival and School.

From Maverick to Woodstock: In the Spirit of the 60s X

The Pacifica String Quartet was launched in California in 1994 by first violinist Simin Ganatra and cellist Brandon Vamos, who had been fellow students at Oberlin. The ensemble quickly achieved a national reputation, particularly for its readiness to perform complete cycles of composers’ works. It has toured with and recorded traversals of the complete quartets of Mendelssohn, Elliott Carter, Shostakovich, and Beethoven; the Carter recording received a Grammy award. The quartet is currently quartet-in-residence and on the faculty of the University of Indiana in Bloomington, after having previously performed a similar role at the University of Illinois from 2003 to 2012. The Pacifica also served as quartet-in-residence at the Metropolitan Museum in New York from 2009 to 2012. Ganatra, originally from Los Angeles, was concertmaster of the orchestra at Oberlin, and went on to perform at Lincoln Center and Carnegie Hall. Her playing has won several awards, including the prestigious Naumburg Chamber Music award and several major national competitions. She has played in collaboration with such artists as Michael Tree and the St. Lawrence Quartet. Austin Hartman, second violinist, has degrees from the New England Conservatory of Music and the Cleveland Institute, and has performed as a soloist with the Philadelphia Orchestra. He has also collaborated with players from the Cleveland, Tokyo, Shanghai, and Juilliard quartets. He was an assistant professor of violin at the University of Indiana. Violist Mark Holloway plays regularly at music festivals around the United States. as well as in France, Switzerland, and the United Kingdom. He has been a guest with the New York Philharmonic, the Metropolitan Opera Orchestra and the Orpheus Chamber Orchestra. He has a masters degree from Boston University and a diploma from the Curtis Institute. Brandon Vamos, cello, has appeared as a soloist with orchestras worldwide, including the New Philharmonia in London and groups in Taipei, Seoul, and Russia. He studied at the Eastman School of Music, then with Aldo Parisot at Yale, where he took his masters degree. He has collaborated with such musicians as Yo-Yo Ma, Menahem Pressler, and the Emerson Quartet.

Felix Mendelssohn wrote the three quartets that make up his Opus 44 in 1837-1838, when he was twenty-eight years old. This was a splendid time in his generally charmed if brief life. His oratorio St. Paul had been a big success, and he had recently become the conductor of the famed Leipzig Gewandhaus Orchestra, a striking role for one so young. He had also recently married, and in fact began work on the quartets on his honeymoon. The first was actually the third to be written, and was a favorite of the composer’s. “It is more spirited and seems to me to be more grateful to the players than the others,” he told Ferdinand David, a violinist friend who was the Gewandhaus concertmaster. After earlier quartets, in which he was trying too hard to model himself on Beethoven, a task to which he was temperamentally unsuited, this set shows the composer at his most fluent and typical; no listener could mistake them for the music of anyone else, and this first quartet particularly is grateful to the hearers as well as the players. As befits this happy period in his life, the music is invigoratingly spirited and joyful. The first movement bursts forth with a vigorous opening melody that features an upward swoop (sometimes referred to as a “rocket”) from the first violin, which leads dashingly throughout. The viola introduces a rather quieter and more tender second subject, but the main meat of the movement is the vigorous exploitation of the opening theme, which twice shades into brief fugal passages contrived with all the easy skill Mendelssohn could command. The headlong and bracing pace continues to the elegant end. The second movement, though called a menuetto, is a long way from a danceable tune. It is a graceful, rather muted movement that flares into mezzo forte only occasionally, and fades into a diaphanous close. The third movement, as so often with the composer, resembles one of his Songs Without Words for piano—a sweet, yearning melody with a pizzicato accompaniment, the texture rather like a voice with guitar. It rises in the middle to a more passionate violin declaration, and the whole movement is urged gently along by a recurring sixteenth-note phrase from the second violin. The finale returns to the buoyant mood of the first movement, dominated by a confident dance-like tarantella, of the kind Mendelssohn had used so successfully in his Italian symphony. A more muted second subject recalls the slow movement, but the vigorous dance strains return to round out the movement with aplomb.

Elliott Carter was for so many years the Grand Old Man of American Music that even now it’s hard to believe he’s gone, having passed on in 2012, just shy of one hundred and four years. Born while Mahler was still alive, Carter was active until the end—in fact, he became increasingly productive, writing more than twenty works after his centenary. He went the classic route of American composers, developing an interest in modern music as a youngster (he attended the U.S. premiere of Stravinsky’s The Rite of Spring at age fifteen), and was encouraged in his music studies by none other than Charles Ives, who sold insurance to his well-fixed Manhattan parents. Carter studied with Nadia Boulanger in Paris in the thirties, and went through a neoclassical phase in the forties. After that, he struck out on his own as a composer. He never embraced serialism, but had a rigorous approach to music, involving the use of all possible chords relating to all the available pitches, which he meticulously catalogued. He was hugely admired by fellow musicians for his professionalism and craft (Boulez and Barenboim were keen proponents of his music), but his work was played and admired more in Europe than here, where he has never been an audience favorite, perhaps because his work proceeds more by musical logic than in an overtly expressive vein. (He claimed that he was more admired in Europe because his music was better rehearsed there, by publicly funded orchestras and musicians.) Unlike most American composers, he had little interest in jazz or popular music, and his inspirations were largely literary: He made settings of the work of a range of poets, including Robert Frost, John Ashbery, William Carlos Williams, Wallace Stevens, Ezra Pound, Elizabeth Bishop, and Marianne Moore.

Carter’s five string quartets, published at intervals over his long life, were seen as quintessential works, and the second and third of them both won Pulitzer Prizes. His Quartet No. 2 has six movements, played without a break. The quartet is highly unusual in that each instrument has its own individual personality, “embodied in a special set of melodic and harmonic intervals and rhythms that result in four different patterns of slow and fast tempi,” according to the composer. He imagined the piece as “a four-way conversation” in which there was “little dependence on thematic recurrence, which is replaced by an ever-changing series of motives and figures having certain internal relationships with each other.” The second, third and fourth movements end with cadenzas for viola, cello, and violin respectively, and there is an exciting moment toward the end when the instruments burst into a striving unanimity—but the work ends quietly. It is full of fascinating string sonorities, as well as passages that are plainly arguments and concurrences, but probably only the most musically literate listener will be able to puzzle out all the relationships.

Ludwig van Beethoven was at the height of his powers when he wrote his middle-period quartets. The opera Fidelio, the Eroica symphony and the Appassionata and Waldstein sonatas were all recently behind him when, in 1808, he produced the amazing threesome of Op. 59, on commission from Russia’s Count Razumovsky. Perhaps he also had the first inklings of the deafness that would soon overtake him—it has been suggested that the almost impossible metronome marking for the last movement of the third quartet was an early example of mishearing. But whatever the composer’s condition at the time, these quartets remain the most toweringly powerful and impressive written until then; and the third of them has always been the favorite, for reasons instantly clear when the Pacifica plays it. It begins in the strangest way, with a series of dark, unrelated and dissonant chords; they seem aimless, but they serve as an admirable preparation for the joyful C-major outburst that succeeds them—as if the sun had suddenly come dazzlingly out. There is no obvious theme, rather a brief step-like motif, gloriously expanded in rushing scales and arpeggios that create a constant joyful outpouring. The second movement, in great contrast, has a rather mournful, meandering theme supported by frequent pizzicatos; it strikes the only Russian note in the work (Razumovsky had requested Russian themes) in its quiet, melancholy resignation, which rises occasionally to hints of muted pleasure. The third movement is a gracious minuet; but, once again, the feeling is restrained, and it ends in a dark and shadowy coda. Like the surprise of the opening movement, however, this is only a preparation for the finale, which explodes suddenly, without a pause. It’s a dazzlingly swift fugue, begun by the viola and taken up by the other instruments; it seems to rise in a series of joyful waves that crest and then start to build again. The effect is one of intoxicating joy and release, as well as gratitude in the listener toward a composer who can deliver such pure pleasure. Toward the end, there is a last surprise with a climax, a sudden pause, and a couple of unison minor chords that pave the way for a coda in which the joy and vigor are transcendent—a real musical high, right here in Woodstock.