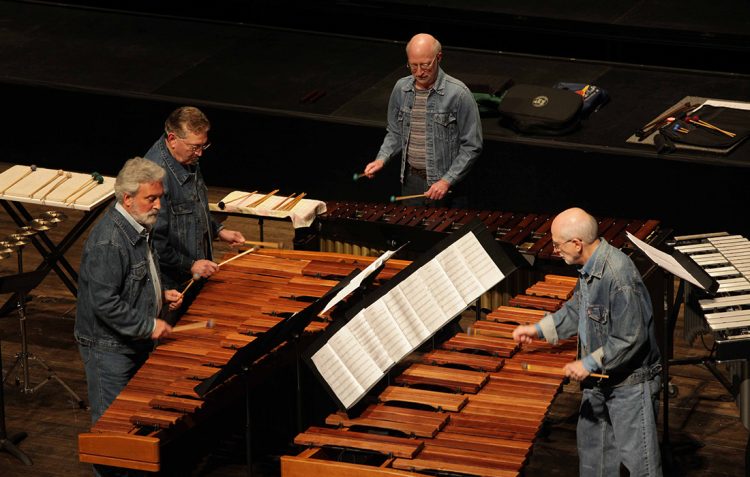 “The high priests of percussion” —The New York Times

This concert is made possible with support from Garry & Diane Kvistad and the Woodstock Chimes Fund.

This concert is made possible with support from Garry & Diane Kvistad and the Woodstock Chimes Fund.

After close to four decades of continuous collaboration, the four master percussionists of NEXUS are internationally revered, not just for their virtuosity both as individual and group performers and their innovation and creativity, but for their ability to create extraordinary music out of just about anything: Swiss cowbells, Chinese drums, Tibetan prayer bowls, Middle Eastern hand drums, and Southeast Asian water buffalo bells, to name just a few. They create a staggering array of sounds and tones out of the broadest array of percussion instruments imaginable. With a repertoire ranging from military music to the novelty ragtime of the 1920s, from the haunting rhythms of Africa to the groundbreaking compositions of John Cage and Steve Reich, NEXUS delivers a stunningly virtuosic spectacle of sound, rhythm, and movement.

The first, entirely improvised NEXUS concert in 1971 marked the formation of a group that would touch and entertain people of all levels of musical learning, in all genres of percussion music. Bob Becker, Bill Cahn, Russell Hartenberger, and Garry Kvistad are all solo virtuosos, as is Stacey Bowers; they all bring elements of their knowledge and character to a distinct and powerful whole. NEXUS stands out in the contemporary music scene for the innovation and diversity of its programs, its impressive history of collaborations and commissions, its revival of 1920s novelty ragtime xylophone music, and the influential improvisatory ideas of its members.

NEXUS’s widespread appeal has taken the group on tours of Australia, New Zealand, Asia, Brazil, Scandinavia, Europe, the US, and Canada. NEXUS is proud to have been the first Western percussion group to perform in the People’s Republic of China. The members of NEXUS have also enjoyed participating at numerous international music festivals, including Tanglewood, Ravinia, and Blossom, as well as the BBC Proms in London, Music Today, and many World Drum Festivals. NEXUS is the recipient of the Banff Centre for the Arts National Award and the Toronto Arts Award. The group was inducted into the Percussive Arts Society Hall of Fame in 1999, just before celebrating their thirtieth anniversary season.

Especially renowned for their improvisational skills, NEXUS was called upon to create the musical score for the National Film Board of Canada’s Inside Time, which won the 2008 Yorkton (Saskatchewan) Film Festival’s Golden Sheaf award for best social/political documentary and the 2008 Robert Brooks award for Documentary Cinematography. NEXUS also created the chilling score for the Academy Award-winning feature-length documentary The Man Who Skied Down Everest. NEXUS’s list of high-profile collaborators includes Steve Reich, the Kronos Quartet, the Canadian Brass, and clarinetist Richard Stoltzman.

Bob Becker is generally considered to be one of the world’s premier virtuoso performers on the xylophone and marimba. He has been percussionist for the Marlboro Music Festival and timpanist with the Marlboro Festival Orchestra under Pablo Casals. For several years he toured as drummer and percussionist with the Paul Winter Consort. He has appeared as a tabla soloist in India and has accompanied many of the major artists of Hindustani music. Bob is also a founding member of the Flaming Dono West African Dance and Drum Ensemble in Toronto. As a regular member of the Grammy Award-winning ensemble Steve Reich and Musicians, he has appeared as soloist with the Israel Philharmonic, the Brooklyn Philharmonic, the New York Philharmonic, and the London Symphony. Bob’s compositions and arrangements are performed regularly by percussion groups worldwide.

Bill Cahn has been a member of NEXUS since 1971, and was the principal percussionist in the Rochester Philharmonic Orchestra from 1968 to 1995. Bill has performed with Chet Atkins, John Cage, Aaron Copland, Chuck Mangione, Mitch Miller, Seiji Ozawa, Steve Reich, Doc Severensen, Leopold Stokowski, Igor Stravinsky, Edgard Varèse, and Paul Winter. In 1999, he was inducted into the Percussive Arts Society’s Hall of Fame. In 2006 Bill received a Grammy award as part of the Paul Winter Consort on the DVD titled 2004 Solstice Concert.

Russell Hartenberger holds a PhD in World Music from Wesleyan University, where he studied mridangam, tabla, Javanese gamelan, and west African drumming. He is professor of percussion, acting associate dean, and chair of the Performance Department at the University of Toronto. Russell has been a member of major symphony orchestras, and has performed with the Paul Winter Consort, Gil Evans, John Cage, John Adams, Glen Velez, Pablo Casals, Canadian Brass, Kronos String Quartet, Peter Serkin, and Yo-Yo Ma. Russell has been a member of Steve Reich and Musicians since 1971, and he performed on the Grammy Award-winning recording of Music for 18 Musicians. With the Reich Ensemble, Russell has toured throughout the world and performed with the New York Philharmonic, Israel Philharmonic, Cologne Radio Orchestra, London Symphony, and Brooklyn Philharmonic.

Garry Kvistad has been a member of NEXUS since 2002. He has toured and recorded with Steve Reich and Musicians since 1980, and won a Grammy award for the 1998 recording of Music for 18 Musicians. Garry has been on the faculty of Northern Illinois University and the University of Cincinnati College–Conservatory of Music. Kvistad has served as the timpanist and percussionist with the Chicago Grant Park Symphony, was a summer Tanglewood Fellow, and was a percussionist with the Cabrillo Music Festival Orchestra, California. He now serves on the faculty of the Bard College Conservatory of Music. Garry is the founder and CEO of Woodstock Percussion, Inc., makers of Woodstock Chimes and musical instruments.

Percussionist Stacey Bowers and Garry Kvistad were members of the Blackearth Percussion Group, which performed from 1971 until 1979. Blackearth held residencies at the University of Illinois, Northern Illinois University, and the College–Conservatory of Music in Cincinnati. The group is credited with rediscovering John Cage’s Third Construction shortly after the manuscript was made public, and performing it throughout the US and Europe beginning in 1977. The group performed thirty-eight world premieres, gave one hundred fifty-seven concerts in the US, Canada, and Europe, made three recordings, commissioned many compositions, played several different concertos with orchestras, experimented with micro-tonal tuning systems, developed several multimedia productions, and was one of the first percussion groups to write and perform minimalist music. Blackearth reunited in 2016 to perform as invited guests at the Percussive Arts Society International Convention in Indianapolis.

Music for Pieces of Wood by Steve Reich relies on the composer’s process of “rhythmic construction,” or substitution of beats for rests in a rhythmic pattern. The piece requires performers each playing a tuned pair of large wooden dowels called claves. All parts are accompanied by a steady clave pulse. One player performs a short rhythmic pattern over and over. One by one the other players build up this same pattern one note at a time, but several beats out of phase with the original pattern. This process is carried out in three sections, with patterns of six, four, and three beats.

Of Maverick Madness: A Group Improvisation Bill Cahn writes: “NEXUS was originally motivated by a common desire to explore music-making through improvisation on our collection of world percussion instruments. Our fascination with the sounds of non-Western percussion instruments—mostly Asian metallophones, tuned metal bars which are struck to make sound—led to our sizable collection. Since there was no music composed yet for this specific group of instruments, with their specific pitches and pitch relationships, it seemed best for us to simply create our own music through improvisation. After all, we knew the possibilities of our instruments better than anyone else. Following the first concert at the Eastman School of Music in Rochester, NY, the plan was simple: ‘Let’s do this again sometime soon.’ Basically, that plan has held up for forty-six seasons.”

The featured voice in Tongues is the African mbira, an instrument whose name literally translates as “tongues,” which refers to its tongues of metal rather than flesh. The mbira is a type of plucked idiophone (any instrument that creates sound primarily by the instrument as a whole vibrating, without the use of strings or membranes). It is found throughout Africa and is sometimes called a “thumb piano” in the west. The mbira performing the leading part is a twenty-two-keyed Shona mbira, known as “mbira dzavadzimu” (mbira of the ancestral spirits). Accompanying instruments include a marimbula (bass mbira from the Caribbean Islands), cowbell, axatse (gourd rattle), and drum. The music is NEXUS’s own interpretation of a traditional Zimbabwean melody. In the Shona culture of Zimbabwe, the mbira is strongly associated with memories of departed ancestors and with the experience of remembering in general.

Ragtime Xylophone Music Selections: From the turn of the century through the Roaring Twenties, there was a tremendous enthusiasm for dance all over North America. One instrument in particular—the xylophone—found its way into the dance orchestras, probably because of its ability to clearly accentuate the syncopated rhythms of the newer dance music. One of the most popular of the dance bands was the Green Brothers Novelty Xylophone Band. This group consisted of string and wind instruments, as well as two or three xylophones played by George Hamilton Green, Jr., and Joseph Green, who were both virtuosos on the instrument. Their popularity was worldwide—George was hailed as the world’s greatest xylophonist when he was just eleven years old. He greatly expanded the instrument’s expressive potential through his many compositions and transcriptions, and was enormously influential in creating a repertoire of concert pieces for solo xylophone. George moved to Woodstock in the late 1940s and is buried in the Artists’ Cemetery. The rebirth of his music was led by members of NEXUS in the late 1970s.

The Green Brothers were very active in the budding record industry, and recorded hundreds of dance tunes—including “Dotty Dimples” and “Fluffy Ruffles One Step,” both composed by George—for virtually every major record label in existence before 1930. The music embodies the energy, joy, and direct sentiment of its time.