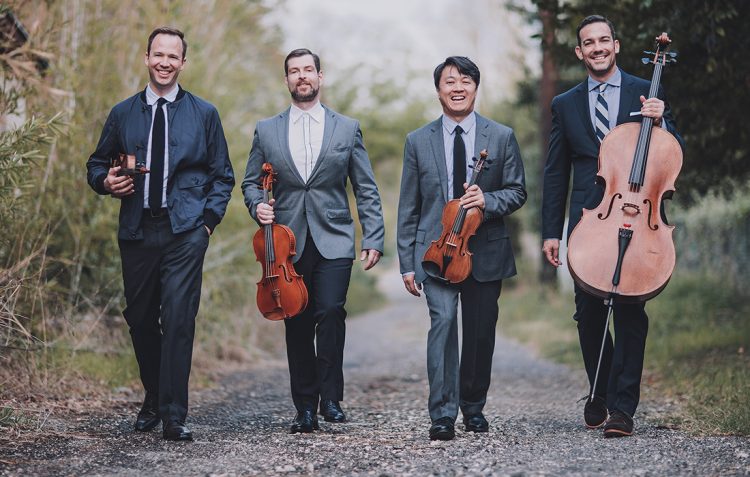 Selections from Cypresses (1884) | Antonín Dvořák (1841–1904) 8. In the Deepest Forest Glade (Lento) 2. Death Reigns in Many a Human Breast (Allegro ma non tropo) 3. When Thy Sweet Glances Fall on Me (Andante con moto) 9. Thou Only, Dear One (Moderato) 11. Nature Lies Peaceful in Slumber and Dreaming (Allegro scherzando)

Formed in 1995, the Miró Quartet is consistently praised for their deeply musical interpretations, exciting performances, and thoughtful programming. Each season, they perform throughout the world on the most important chamber music series and the most prestigious concert stages, garnering accolades from critics and audiences alike. The Miró Quartet took its name from the Spanish artist Joan Miró, whose surrealist works—with subject matter drawn from the realm of memory and imaginative fantasy—are some of the most original of the twentieth century. Miró Quartet took first prizes at several national and international competitions including the Banff International String Quartet Competition and the Naumburg Chamber Music Competition. The Miró was the first ensemble ever to be awarded the coveted Avery Fisher Career Grant, in 2005. The Miró Quartet is based in Austin, Texas, and regularly tours throughout North America, Asia, and Europe. They are frequent performers in major American festivals such as the Santa Fe Chamber Music Festival, Chamber Music Northwest, La Jolla Summerfest, and Orcas Island Chamber Music Festival. The Mirós have collaborated with noted musicians including Pinchas Zukerman, Joshua Bell, Midori, Leif Ove Andsnes, Jon Kimura Parker, and Eliot Fisk, among many others. Concert highlights of recent seasons include a highly anticipated and sold-out return to Carnegie Hall to perform Beethoven’s complete Opus 59 Quartets, and collaborations with award-winning actor Stephen Dillane as part of Lincoln Center’s White Lights Festival. The Miró Quartet regularly collaborates with pianist Jon Kimura Parker, percussionist Colin Currie, and mezzo-soprano Sasha Cooke (whom they recently performed with on the quartet’s Schubert Interrupted recording). The Miró Quartet has served as the quartet-in-residence at the University of Texas at Austin Sarah and Ernest Butler School of Music since 2003. Deeply committed to music education, members of the Miró Quartet have given master classes at universities and conservatories throughout the world. The Quartet’s discography includes a recording of George Crumb’s Black Angels, which was awarded a Diapason d’Or award. The Quartet has recorded music of Felix Mendelssohn and Franz Schubert with cellist Matt Haimovitz (an undertaking that received a mention in The New York Times), and all six of Beethoven’s Opus 18 string quartets. Of a recent performance, the Cleveland Plain Dealer wrote: “Throughout the concert, the Miró gave lessons in the art of the string quartet, shaping each of the night’s scores with a blend of refinement and vibrancy that drew the listener deeply inside the sonic arguments.”

All program notes are copyright Miriam Villchur Berg. It is permissible to quote short excerpts for reviews. For permission to quote more extensive portions, or to copy, publish, or make other use of these program notes, please contact her at miriam@hvc.rr.com.