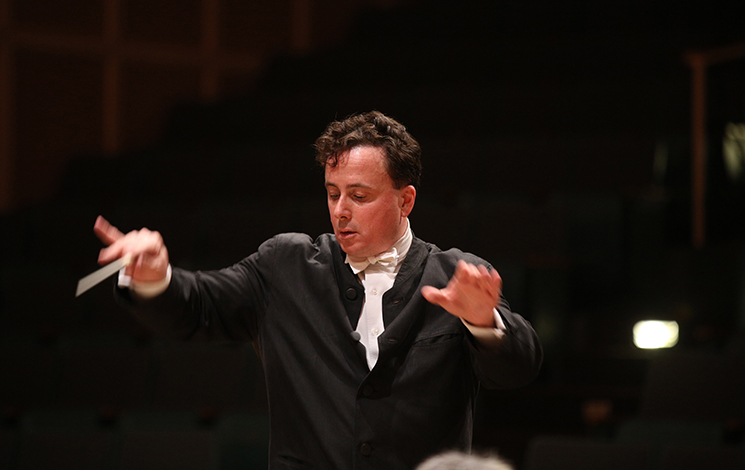 This concert is made possible by the generous support of the Thompson Family Foundation.

The Caroga Arts Ensemble is a group of young professional musicians who play for the annual Music Festival at Caroga Lake, in the Adirondacks, under the direction of cellist Kyle Price, who established the festival at the age of nineteen. The group made their Maverick debut last year performing Leonard Bernstein’s Songfest, which they repeated this year at the Ravinia Festival outside Chicago. Adam Tendler, described by The New Yorker as an “intrepid… outstanding… maverick pianist,” recently received the prestigious Lincoln Center Award for Emerging Artists, and has already established a reputation as a highly gifted performer of modern and contemporary music. He has performed all of Aaron Copland’s (extremely difficult) music for piano, and has been very active on behalf of John Cage’s music. At Maverick four years ago, he recreated the premiere performance here of Cage’s celebrated 4’33”. He has performed in all fifty states in a series of grassroots recitals called “88×50,” and later wrote about the experience in a book of the same name. A few years ago in New York City he played the Glass work we will hear today, without a score and in the dark. Elizabeth Bishop is a powerful mezzo-soprano who is based at the Washington National Opera but has sung with many other U.S. opera companies, including the Met (perhaps most notably in Leoš Janáček’s Jenufa and Hector Berlioz’s Les Troyens) as well as companies in Chicago, Los Angeles, San Francisco, and Atlanta. She has an extensive repertoire, including Mahler’s song cycles and the mezzo roles in the symphonies. Bishop was educated at The Juilliard School and won the Metropolitan Opera’s National Council Auditions, and she has been singing and teaching nationwide. Barry Banks is a British-born tenor whom Maverick audiences heard last year in Songfest. He has enjoyed a long association with both the English National Opera and the Met, where he specializes in Italian bel canto roles. Banks made his American debut in 1993, singing in Leonard Bernstein’s Candide in Chicago, and has since sung with many major American and European opera companies and in Europe. Garry Kvistad is a celebrated percussionist who is well known locally as the founder and owner of Woodstock Chimes. He has been a member of the renowned NEXUS percussion group since 2002; his affiliation with NEXUS includes the Grammy Award-winning recording of Steve Reich’s Music for 18 Musicians. Percussionist Bill Cahn, also a long-time NEXUS member, has been an associate professor at the Eastman School, and was principal percussionist of the Rochester Philharmonic from 1968 to 1995. Conductor Alexander Platt is omnipresent at Maverick, serving as its music director and master of ceremonies. His annual chamber concerts, usually featuring a major choral/orchestral work refashioned for smaller forces (often by Platt himself), have become a welcome Maverick tradition in recent years.

Luciano Berio was a leading Italian composer, conductor, and teacher at the forefront of the musical avant-garde for forty years. His teaching positions in the United States included stints at Juilliard, Harvard University, and Mills College. With fellow Italian modernist Bruno Maderna, Berio founded an electronics studio at Radio Milan that was one of the most celebrated in Europe. His first wife was the extraordinary American soprano Cathy Berberian, for whose phenomenally flexible voice he wrote one of his famed Sequenzas, a series of virtuoso pieces for individual instruments and voice. Berio won many international awards and honorary degrees; he was probably best known in this country for his 1968 Sinfonia for orchestra and eight amplified voices. The piece is made up of many musical and literary fragments, including snippets of Mahler’s Resurrection Symphony and words of the Irish playwright Samuel Beckett. Sinfonia was taken up and recorded by Leonard Bernstein. Sequenza IV is a kinetic, restless piece for piano that makes great demands on both the performer and listener, composed as it is of constantly changing chords and pianistic gestures, sudden silences, and extremes in both dynamics and registers. At some points the pianist plays with the palms of the hands rather than fingers. The sostenuto pedal plays a powerful role in this Sequenza, producing, according to Berio, “veiled harmonic sequences.” The work, the composer said, “can be viewed as a voyage of exploration through diversely characterized instrumental articulations, and as a dialogue between chordal development and linear development of the same material.”

Philip Glass is a musical polymath whose music is known to an amazingly wide range of audiences, from concert hall to opera house to movie theater to pop music radio. He has written a couple of dozen operas, countless movie scores, twelve symphonies, an equal number of concertos, and a wide range of chamber and solo music. In popular music, he has collaborated with the likes of Paul Simon, Linda Ronstadt, and David Bowie, and in dance and poetry with Twyla Tharp and Allen Ginsberg. At eighty-two, he is still going strong, leading his Philip Glass En semble in performances around the world. He has studied in Paris with Nadia Boulanger and in India with Ravi Shankar — though in his earlier works it is the latter’s influence, in oft-repeated patterns, that is most plain. Two Pages is one of those earlier works, dating from 1968, when it and similar Glass pieces had a remarkable impact on serious American music audiences, demonstrating, among other things, that serialism was dead. The piece is so-called because, despite its eighteen-minute length, there are so many repeats that it occupies only two pages of sheet music. The entire work is based on a five-note sequence in a minor key that is repeated endlessly, and develops only by adding notes at the end — especially a chiming two-note phrase — and occasionally subtracting them from the beginning; that’s all that happens. It is an acquired taste. Some find it hypnotically gripping, others boring, but one reviewer neatly summed up one virtue that can be widely appreciated: “When you get to the end, the sense of relief makes the whole experience well worth it.”

Gustav Mahler was near the end of his too-short life when he began Das Lied von der Erde (“The Song of the Earth”) in 1907, at a time of great personal anguish: He had just quit his hugely influential post as head of the Vienna Court Opera, his cherished daughter had died, and he himself had been diagnosed with the heart ailment that would kill him four years later. He had originally intended it to be a symphony with voices, like his Second, Third, Fourth, and Eighth symphonies, but the familiar anxiety among composers about composing a ninth symphony (so as never to outdo Beethoven!) scared him away, and he made it instead a massive orchestral song cycle—although he actually penned a Ninth symphony anyway, and even started a Tenth. The six movements are based on ancient Chinese poems, though at a considerable remove: Mahler had read them in a German translation that was in turn based on an edition in French. He was instantly attracted to them; the poems contained all of Mahler’s favorite themes: youthful exultation, the anguish and ecstasy of love, a passion for nature, and a profound sense of sorrow at the brevity of human life. The original work is scored for a huge orchestra, though it is deployed sparingly, in Mahler’s skillful manner, and the idea of a chamber version is not at all perverse. In any case, the original motivation of Arnold Schoenberg’s reduction was to make Das Lied more widely accessible. Schoenberg originally meant for this much reduced orchestration to be used for his Society for Private Musical Performance, which he had founded in Vienna after World War One. Soon after he began work on it in 1921, however, the Society disbanded and he abandoned his work with only the first movement completed, though he had chosen his instrumentation of a dozen or so players. More than sixty years later a German avant-garde composer and conductor, Rainer Riehn, took up the work and completed it. Schoenberg’s is naturally the better-known name and therefore comes first in the credits, but in fact Riehn did most of the work.

Mahler’s love for the subject matter of these Chinese poems enabled him to draw them together into a cohesive, if ultimately despairing, statement. The songs all add up to the final, sorrowful “Farewell,” which is almost as long as the other five movements combined. The music of the first movement, “The Drinking Song of Earth’s Sorrow,” is at once heroic and agonized, and keeps returning to the somber refrain “Dark is life, dark is death.” It finds the tenor often at full stretch, at uncomfortable pitch and volume against a noisy orchestra; he is more easily heard (and exposed) in the chamber version. The second song, “The Solitary One in Autumn,” for mezzo-soprano, has a long and peaceful wind introduction before the singer’s sad lament, which is exquisitely echoed by the winds and leads to a quiet orchestral postlude. The third movement, “Of Youth,” is a kind of scherzo with trio, a cheerful, almost rustic song for tenor. In the fourth, “Of Beauty,” it is the mezzo’s turn to be more cheerful as she sings, again to a perky, folksy melody, of girls picking flowers and watching handsome young men ride by — at which point the music speeds up, with fanfares, before a return to the peaceful opening. The fifth movement, “The Drunkard in Spring,” for tenor, starts with horn calls and wind trills — the winds in exquisite form — and rises to a passionate climax. “The Farewell” is the best-loved and most beautifully shaped movement, and contains the most Oriental-sounding music. It starts with quiet strokes on a gong and lamenting flute arabesques before the mezzo launches into her rapturous lament. The same orchestral gesture recurs while she sings of parting from her friend. There is a large and eloquent orchestral passage in the middle while the singer is silent, then begins the ravishing passage in which she sings her farewell to life, with its ineffable fade into a hushed “Ewig, ewig” (“Forever, forever”). Applause seems like an intrusion, but is inevitable.