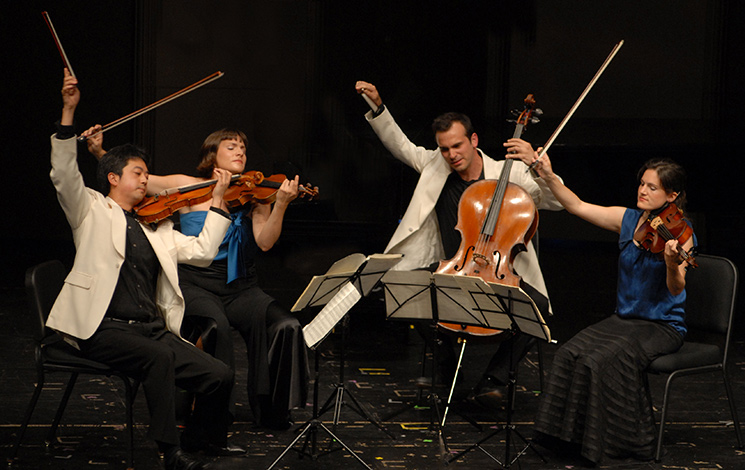 Americans in Paris: Ned Rorem and the Spirit of France—this project is supported in part by an award from the National Endowment for the Arts.

The Jupiter Quartet is the nearest thing to a family group among quartets: Meg Freivogel, second violin, and Liz Freivogel, viola, are sisters, and cellist Daniel McDonough is Liz’s husband. First violinist Nelson Lee was at the Cleveland Institute with Meg and Daniel when they decided to form the quartet in 2002. Liz, studying at nearby Oberlin, was an obvious choice for viola—she and Meg had grown up playing in quartets with their brothers. They chose the name Jupiter because the planet was the most prominent one in the night sky at the time they formed the group, and they liked the association of happiness and strength that came with the Roman god. They went on together to the New England Conservatory of Music and were mentored early on in their career by members of the Takács and Cleveland quartets. Signal recognition came when they won the grand prize at the Banff International contest, and they soon began playing at major U.S. music festivals and at leading concert houses around the world. The Jupiter has been hailed by the Washington Post for its “positively celestial playing” and has commissioned a number of works. The group is currently quartet in residence at the University of Illinois.

Daniel Gortler is an Israeli-born pianist who won his first piano competition award when he was only nineteen; he went on to take first prize at Chile’s Viña del Mar contest in 1987 and, four years later, at the Bremen International. He was on the music faculty at Tel Aviv University until 2011, but now spends most of his time performing with major orchestras around the world, as well as with chamber groups, in solo recitals, and as an accompanist. He made his U.S. debut recital at the 92nd Street Y and has appeared at London’s Wigmore Hall, the Metropolitan Museum of Art, and the Morgan Library. Conductor Christoph Eschenbach, one of the many maestros with whom he has appeared, said of him: “He has extraordinary abilities that combine technical skills and profound musicality.” Gortler’s most notable recording to date is his traversal of Mendelssohn’s complete Songs Without Words.

Claude Debussy was thirty-one years old when in 1893 he wrote the String Quartet in G Minor, Op. 10, his first and only work in this medium. This was also the first of his works to show the world the shimmering, impressionistic style of writing that became his signature contribution to music. It is the only work to which Debussy gave an opus number and a key signature. It was soon followed by what everyone recognized as a breakthrough work widely heralded as the dawn of musical modernism: the ravishing orchestral tone poem Prélude à l’après-midi d’un faune. Debussy was impatient to break free of centuries of musical conventions, declaring: “I love music passionately. And because I love it, I try to free it from the barren traditions that stifle it.”

His quartet by no means breaks free entirely from these traditions. It is conventionally structured, with an expansive opening movement, a sort of scherzo, a slow movement, and a powerful finale. But here the resemblance to a conventional quartet ends. What immediately strikes the listener, and has made the quartet a perennial favorite, is the coloristic use of the instruments and the lush, wayward, and often unexpected harmonies. It begins with a striking declaratory gesture that recurs, in cyclical fashion, throughout the work in many guises. A plaintive note is struck toward the end of the first movement, shortly before a vigorous finish. The second movement, marked Assez vif et bien rythmé—rather fast and rhythmical—is full of lively cross-rhythms and pizzicato effects; its influence on the similar movement in Ravel’s string quartet, which was composed twenty years later, is obvious, as is the influence on Debussy of Javanese gamelan effects and Iberian dance. In the third movement, the instruments are muted, the slow unfolding of the languorous melody dreamlike. It rises to a brief climax, then a second yearning theme is taken up and fades exquisitely. The last movement gave Debussy the greatest trouble, but his efforts paid off. The opening theme goes through a number of variations, including a fugal episode begun by the cello, after which the instruments accelerate breathlessly to an exciting and triumphant finish.

Ned Rorem had recently begun his decade-long French sojourn when he wrote his Piano Sonata No. 2 in 1949. It is clear-cut, dispassionate music that displays elements of restraint, occasional gaiety, and transparency, all qualities Rorem admired in French music and strove to emulate. The sonata, which lasts about fifteen minutes, is in four movements with suggestively theatrical titles: Overture, Tarantella, Nocturne, and Toccata. The first reminds one of his friend Francis Poulenc—jaunty, with a shade of tristesse. The second movement, as its title suggests, is fleet-footed and sparkling, with delicious decorations. The Nocturne is touching, ruminative, and delicately shaded, with a hint of the Préludes of Debussy. The Toccata is driving and determined, with a solid rhythmic push that slows only briefly before a resolute finish. This charming sonata is above all a civilized pleasure to hear.

Sydney Hodkinson is a Canadian-born composer, now in his eighty-fourth year, who has written more than two hundred and fifty pieces in a wide variety of genres, including nine symphonies, several concerti, and much chamber music. The influence of jazz is apparent in much of it. Hodkinson has degrees from the Eastman School of Music and the University of Michigan and taught at Eastman for many years before retiring in 1999. He studied under Elliott Carter and Roger Sessions and also, briefly, with Benjamin Britten. He has won many awards, including from the American Academy of Arts and Letters, the National Endowment for the Arts, and the Guggenheim and Ford Foundations. Hodkinson became an American citizen in 1995 and now lives in Florida with his wife, the violinist Elizabeth Deischer. It was at the Aspen Music Festival, where Hodkinson has also taught, that his Aspen-commissioned String Quartet No. 7 was premiered by the Jupiter four years ago. The quartet, which lasts about seventeen minutes, is in two movements, the first marked Molto risoluto: Feroce, which is accordingly violent and threatening. The second, a passacaglia dedicated to Britten (one of whose favorite forms this was) is very different: a strangely haunting, rather unsettling piece that sinks to a peaceful conclusion.

In 1842 Robert Schumann, who up to then had composed mostly for the piano, decided, at his wife Clara’s urging, to try his hand at chamber music. He wrote three string quartets in rapid succession; they were soon followed by the Piano Quintet in E-flat major, Op. 44, in which his relief at being able to return to the piano is apparent in the joyful geniality of the work, beautifully balanced between piano and strings. One observer has suggested the inspiration came from Schubert’s great Second Piano Trio, which Schumann loved and which is in the same key and also has a funeral march in the second movement. Clara was supposed to have played the first private performance, but was ill; the Schumanns’ dear friend Felix Mendelssohn took her place at short notice, reading the difficult piano part at first glance. Clara played in the first public performance. It was a great success, inspiring Brahms to write his own piano quintet. It has continued to be an audience favorite; many chamber music enthusiasts would bracket it with Schubert’s Trout and Dvořák’s Op. 81 as their favorites for this combination.

The quintet begins with a clamorous declaration from the piano, soon joined by the strings. Then a second theme emerges, wonderfully romantic and songful, and the rest of the movement sees them constantly juxtaposed and richly decorated. The second movement limps in slowly as a spectral funeral march, which unfolds at length. A second theme is sad but without the real grief of the beginning. Then comes a reprise of the march, at a faster tempo and with a delicious tremolando accompaniment, before the somber strains of the march return at the original tempo. The scherzo movement is extraordinary, composed largely of scale runs from the piano and strings accompanied often by trills that have the most delightfully carefree effect. Schumann is so pleased with this idea that he repeats it often, but it never wears out its welcome. The last movement begins with one of the composer’s forthright, striding tunes, which morphs into a gentler and more wistful melody. These are extensively worked out, and the piece is hastening toward what seems like a coda when Schumann pulls a surprise. The music suddenly stops, and as if from nowhere, a double fugue arises, a combination of the opening themes from the first and last movements. The effect is exhilarating, and after a minute or two of strenuous workout, the quintet ends on another coda—this time the real one.