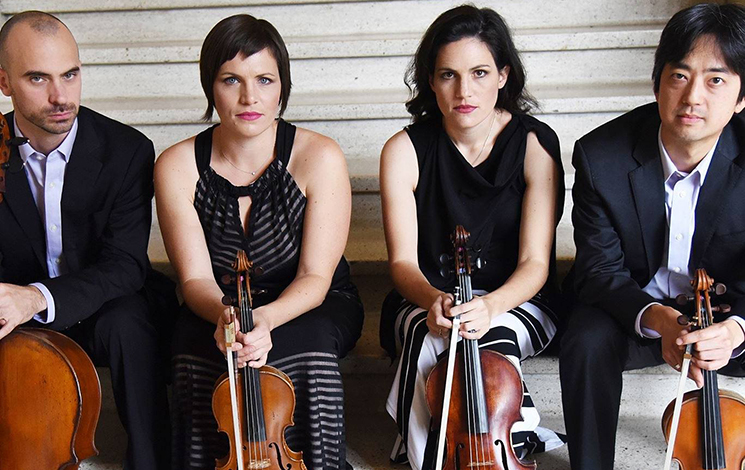 Lovingly dedicated in fond memory of our dear friend and Trustee, the late Betty Ballantine

www.jupiterquartet.com
www.michaelbrownmusic.com
From Maverick to Woodstock: in the Spirit of the 60s VII

Theme: The Song of the Water Nymph — Meditation — Caprice
The Feathered Ones — Charms — Humoresque — Among the Waves
The Tumult of the Crowd — Into the Forest — A Wood-Goblin — Elves — Gnomes
Invocation — The Threat — Mermaid’s Song — Bad Weather — Conclusion

The Jupiter  Quartet stands at the forefront of the younger generation of classical chamber music ensembles. Formed in 2002, they perform at the world’s finest halls including New York’s Carnegie Hall and Lincoln Center, London’s Wigmore Hall, Austria’s Esterhazy Palace just to name a few. Michael Brown has been described as “one of the most refined of all pianist-composers” (International Piano) and “one of the leading figures in the current renaissance of performer-composers” (The New York Times).

Theme: The Song of the Water Nymph — Meditation — Caprice
The Feathered Ones — Charms — Humoresque — Among the Waves
The Tumult of the Crowd — Into the Forest — A Wood-Goblin — Elves — Gnomes
Invocation — The Threat — Mermaid’s Song — Bad Weather — Conclusion

The Jupiter Quartet is a tight-knit group in more ways than one. Apart from their close teamwork in music, they are also closely related in life. Second violinist Meg Freivogel is married to cellist Daniel McDonough, and violist Liz Freivogel is Meg’s older sister. Only first violinist Nelson Lee is unrelated to any of the others. Formed in 2001, the group has won an impressive number of competitions and awards, including the Banff International String Quartet Competition and, in 2008, the highly prestigious Avery Fisher Career Grant. The Jupiter was quartet-in-residence for several years at the Chamber Music Society of Lincoln Center’s Chamber Music Two, and currently fills the same role at the University of Illinois at Urbana-Champaign. The Jupiters are equally skilled in the classic and contemporary repertoire, having performed several complete Beethoven cycles at the Aspen Music Festival and the MIT Chamber Music Society, and the complete Bartók string quartets at Urbana-Champaign. Among the current composers from whom they have commissioned works are Sydney Hodkinson, Hannah Lash, Dan Visconti, and Mark Adamo. The Jupiters have performed at all the major halls in the United States and Europe; committed to music education, the ensemble plays frequently at schools and community centers. They take their name from the largest planet—whose astrological sign ( )resembles a numeral four. First violinist Nelson Lee comes from a highly musical family, and his musical career took him first to Yale, then to the Cleveland Institute, and finally to the New England Conservatory. Like the other players, he regularly gives master classes at a number of music schools. Second violinist Meg Freivogel McDonough played as a child with her sister Liz and her two brothers; she later followed the same Cleveland Institute–New England Conservatory route. Meg also plays with the East Coast Chamber Orchestra. Liz Freivogel, viola, was studying at Oberlin when the others asked her to join the group. She has won several viola prizes and, like the others, teaches master classes at a number of music schools. Daniel McDonough began his violin studies at five, but switched to the cello at his teacher’s suggestion. His later musical education was at the Cleveland Institute and The Juilliard School, and he is also a member of the East Coast Chamber Orchestra. Pianist Michael Brown, making his Maverick debut today, has been described by The New York Times as “one of the leading figures in the current renaissance of performer-composers.” He has dual degrees in piano and composition from Juilliard, and in 2015 was awarded an Avery Fisher Career Grant. Michael received an Emerging Artist Award from Lincoln Center, and is composer- and artist-in-residence with the New Haven Symphony, which will perform a symphony it commissioned from him.

Wolfgang Amadeus Mozart greatly admired Joseph Haydn’s groundbreaking Op. 33 quartets, and wrote his own set of six in tribute to them, “The Haydn Quartets.” The Quartet in A Major, K. 464, the fifth of the group, is one of the longest and most ingeniously worked out string quartets that Mozart ever composed. Beethoven greatly admired it: He actually wrote out his own copy, and modeled his Op. 18, No. 5, upon it. The work has sometimes been called the “Drum” quartet; an effect by the cello and the viola in the slow movement sounds like a drumbeat. The quartet is the essence of classical poise and the galant style, with none of the emotional underpinnings of some of Mozart’s later quartets and the string quintets. It is a supreme example of how comparatively simple ideas can be treated with great inventiveness and ingenuity. The first movement is cheerful, with themes that are developed in considerable contrapuntal play. A certain halting quality about the central development section offers an appealing change of mood. The minuet is based on a pair of simple ideas—a unison statement answered by a gaily tripping reply, again treated with much contrapuntal ingenuity. The slow movement opens in the lower register of the first violin with a quiet, intimate melody that is then the subject of variations in each instrument in turn. The last variation features the “drumbeat” accompaniment in the cello and the viola. The last movement carries ingenious simplicity to remarkable lengths. A descending four-note phrase, with a perky response, forms the entire material, which is elaborated with endless resource. As a final surprise, Mozart withholds the expected final flourish, and the work ends in a quiet murmur.

Dmitri Shostakovich had very close ties to the Beethoven Quartet, which formed in Moscow as he was just beginning his career. They played the premieres of most of his quartets and of the popular piano quintet; the death in 1965 of second violinist Vasily Shirinsky, while the composer himself was in a sanitarium, was a severe blow to him. When the composer recovered the next year and began writing his eleventh string quartet, he dedicated it to the memory of his friend and colleague. It is short—only sixteen minutes—and predominantly bitter and desolate, taking on an elegiac tone only toward the end. The work’s seven movements are played, as is the case with several of the composer’s quartets, without a break. The music is sparsely scored: Often only one or two instruments are playing, and unison statements are scanty. It opens with a long, winding, and sad violin solo that contains most of the material that is worked over in the remaining movements. The swift scherzo has a rapid rhythmic pattern, with glissando swoops in the upper strings, and peters out quickly. The third movement is a sinister recitative, almost bullying, with brusque, threatening gestures that turn harsh, then hollow. In the Étude, the first violin has a “gypsy” quality, and the pace is headlong. In the bizarre Humoresque, another strong rhythmic pattern emerges, with the second violin hitting the same note over and over. The Elegy that follows is the longest and most plainly sorrowful movement: It is a dirge, a funeral march that concludes with a mournful cello. The Finale offers a thoughtful summary of what has gone before, and ends with the other instruments moving slowly beneath a stratospheric violin note.

Considering what a beloved staple of the repertoire it has become, Johannes Brahms’s Piano Quintet in F minor, Op. 34, had a particularly protracted and difficult birth. The composer originally wrote it in 1862 as a string quintet, only to be told by a trusted friend, the violinist Joseph Joachim, that the music was too strong to be conveyed adequately by strings alone. He rewrote it as a piano duet, but Clara Schumann told him it seemed like an arrangement of something. Brahms finally, in 1864, published it in its present form, and the piece been going strong ever since. (Brahms burned the string quintet version, but kept the two-piano version and gave it another opus number.) It is recognizably the work of a young man, full of gusto and bravado, yet with a winning lyrical streak. The movements that make the biggest impression are the first and third; the piano has an aggressive and virtuoso role throughout, but the strings are richly scored, and at times the effect is like a piano concerto. The work begins quietly, with a rambling, romantic melody, but then there is a forceful upward rush, tossed back and forth between strings and piano, and apart from one or two quiet moments when the movement comes almost to a stop, the drama remains at a high level. The second movement is a ruminative, faintly Slavic melody, autumnal and mellow, a character that became so beloved a feature in Brahms’s later works. The third movement is a scherzo with an irresistible galloping theme. This is gloriously elaborated in a series of joyous eruptions, a few strenuous fugal moments, and a quieter, more graceful trio section. The movement ends with a strangely unresolved chord, rather like the Schubert quintet that inspired Brahms. The last movement begins quietly and quickly morphs into a Hungarian-style dance. This is developed in rondo style until, more than two minutes before the end, the music seems about to end. Then, beginning quietly, there is a thrilling buildup, ever accelerating, toward the real coda, which is headlong when it arrives. For a century and a half it has brought audiences to their feet.

Nikolai Medtner was an odd figure in music. A contemporary of Rachmaninoff, who thought him the greatest composer alive, he wrote mostly for the piano, with huge fluency and imagination but without the dramatic and melodic flair that made his compatriot so popular. Just as Rachmaninoff spent much of his life in the United States, Medtner, who left the Soviet Union much later, settled eventually in London, where he achieved something of a following. His Second Improvisation for Piano dates from 1926 and is a set of sixteen variations on a theme called “Song of the Water Nymph.” It is fanciful, and full of brilliant pianistic effects—it sounds rather like a cross between Chopin and Debussy, with a dash of Russian drama thrown in. The individual pieces last no more than two minutes each, and the whole work plays for about thirty minutes.