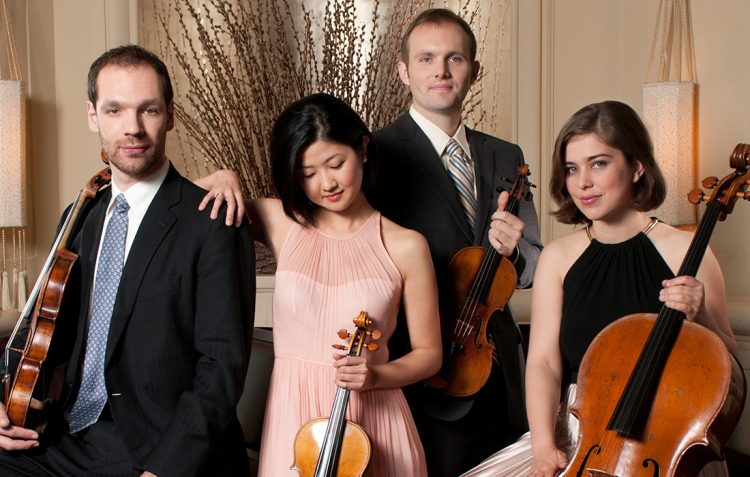 A Maverick Debut
The New Foundations project is supported in part by a  grant from the National Endowment for the Arts.

Maverick Debut
New Foundations IV
New Foundations: Toward a Modern Chamber Music Repertoire is a mini-festival of chamber music composed  in the last thirty years. The series is supported in part by an award from the National Endowment for the Arts.

The Jaspers have been hailed as “sonically delightful and expressively compelling” (The Strad) and “powerful” (The New York Times). “The Jaspers… match their sounds perfectly, as if each swelling chord were coming out of a single, impossibly well-tuned organ, instead of four distinct instruments.” (New Haven Advocate)

The Quartet rounds out their commission tour of Aaron Jay Kernis’ third String Quartet, “River,” in 2016-2017, with performances at Wigmore Hall and at Classic Chamber Concerts in Florida. The Quartet’s Carnegie Hall performance of the work received a glowing review in The Strad.

In 2008, the Jaspers swept through the competition circuit, winning the Grand Prize and the Audience Prize in the Plowman Chamber Music Competition, the Grand Prize at the Coleman Competition, First Prize at Chamber Music Yellow Springs, and the Silver Medal at the 2008 and 2009 Fischoff Chamber Music Competition. They were also the first ensemble honored with Yale School of Music’s Horatio Parker Memorial Prize, an award established in 1945 and selected by the faculty for “best fulfilling… lofty musical ideals.” In 2010, they joined the roster of Astral Artists after winning their national audition.

The Quartet was the 2010-2012 Ensemble-in-Residence at Oberlin Conservatory and, in conjunction with Astral Artists, was awarded a 2012 Chamber Music America grant through its Residency Partnership Program for work in Philadelphia schools. From 2009 to 2011, the Jaspers were the Ernst C. Stiefel String Quartet in Residence at the Caramoor Center. They were the first ensemble to be invited for a second year as such.

The Jaspers perform pieces that are emotionally significant to its members; the Quartet’s repertoire ranges from Haydn and Beethoven through Berg, Ligeti, and living composers. They have commissioned string quartets from some of today’s best composers, including Aaron Jay Kernis, Andrew Norman, Nicholas Omiccioli, Conrad Tao, and Annie Gosfield. Critics and audiences commend the Jasper String Quartet’s “programming savvy” (clevelandclassical.com). They have performed throughout the United States and in Canada, England, Italy, Japan, Korea, Norway, and Panama.

In their Melba and Orville Rollefson Residency at the Banff Centre, the Jaspers embarked on a program of “guerrilla chamber music,” performing concerts in unusual settings around Alberta, Canada. Currently, the quartet works closely with Philadelphia’s Astral Artists to bring outreach activities to schools.

In addition, this year they launch the inaugural season of Jasper Chamber Concerts, a series in Philadelphia devoted to world-class performances of masterworks from around the world.

Formed at Oberlin Conservatory, the Jaspers began pursuing a professional career in 2006. Their principal mentors were James Dunham and the Tokyo String Quartet, with whom they studied as Yale University’s Graduate Quartet-in-Residence.

Haydn’s Opus 76 was his first published work as an unencumbered composer. In the 1790s, freed from his responsibilities at the court of Esterházy, he traveled twice to London. He was financially secure, and famous throughout Europe. He composed these works in 1799 on commission from Count Joseph Erdödy, court chancellor to the Esterhazy.

The String Quartet in G Major, Op. 76, No. 1, the first of the set of six, starts with three strong introductory chords. When the first movement proper (Allegro con spirito) starts, the cello announces the simple, cheerful theme—like a peasant tune or a children’s song. Despite its light-hearted quality, Haydn treats it with complete seriousness, as if to say he could spin music out of anything. The strings play in many varied textures: unison, chords together, melody with accompaniment, and dialogue, ending with a majestic cadence.

The slow second movement (Adagio sostenuto) starts with a gentle theme played like a chorale or hymn. A new melody is presented in a dialogue between the violin and the cello. In the development section, the dialogue theme is played in minor, modulated into different keys, and broken into single notes. The return of the chorale theme marks the end of the development, and the dialogue takes over until the cello plays a gentle arpeggio up and down the chord to the ending.

The Menuetto is marked Presto, an unusually quick tempo, probably too fast to accompany an actual dance. By this point in music history, the evolution from minuet to scherzo had taken place in form, if not always in name. Haydn’s playfulness comes out in the surprise of a quintuplet—five very fast notes—played loud and insistently in the midst of the tripping tune. The central Trio section has a plucked accompaniment, like a strummed folk instrument, and the violin plays a rustic melody, like the country waltz known as a ländler.

Haydn starts the Finale: Allegro ma non troppo in a minor key, all parts playing the same theme, which features a trill and a dotted rhythm. The theme changes to major and is played in fast triplets, with agile violin and cello runs. Low, dark chords provide an occasional moment of punctuation. The trill theme is extensively developed, and finally played slow, sweet, and high. At the point where we expect the cadence, the music stops dead, and Haydn inserts another playful recap of the trill theme. In case we failed to catch it, he plays it twice before the final cadence. Haydn is known for his musical wit, and this quartet makes the point that serious music can also have elements of fun.

Aaron Jay Kernis served as the composer-in-residence to the Saint Paul Chamber Orchestra for several years, and more recently became composer-in-residence at Mannes College. He takes inspiration from the music of earlier eras, from salsa and other popular music forms, from literary works, and from political events—his Second Symphony was a protest against American actions in the Persian Gulf War. As one of the youngest composers ever to be awarded the Pulitzer Prize, he is among the most celebrated musical figures writing today.

The composer writes: “This third string quartet is a significant departure from my earlier two quartets, which looked to the distant past for form and inspiration. Instead, this new work dispenses with classical structure and influences almost completely, touching continually on processes of change and flux. I went back to a novel of the early twentieth century, beloved of my mother and seemingly influential to me: Jean-Christophe by French author Romain Rolland. [Editor’s note: This is a ten-volume fictionalized account of the life of Beethoven, who is cast as a German composer of Belgian extraction. In his long life, Jean-Christophe undergoes arduous tribulation, spiritual struggle, and eventual triumph.] Central as a returning metaphor in the book is the Rhine River; no matter the change that occurs in the life of Jean-Christophe and the history of the countries the Rhine touches, the river continues its inexorable flow.

“This new quartet looks at the change, flow, and flux of musical materials. The five movements create a roughly symmetrical form, with the longest, nine-minute movement in the middle. The outer movements are the most related to one another, each opening with a cello solo, but they otherwise have highly contrasting characters: the first dramatic and the last more tranquil. The inner movements are also highly contrasting, yet more single-minded in speed (the second movement) and lyricism (the fourth movement). The middle (third movement) is the most wildly varied and tough-minded, influenced by mirror-like flecks of light reflecting on water, and drastic and subtle changes of speed and character.

“String Quartet No. 3, ‘River,’ is dedicated in loving memory of singer and artistic director Julian Rodescu, who laid the cornerstone for this collaboration with the Jasper String Quartet. It was written for and is dedicated to the members of the quartet.”

Johannes Brahms was connected with several women during his lifetime, but never married. Many have speculated (based in part on his own writings) that the great love of his life was Clara Schumann, but that because of his friendship with her husband Robert, he could not pursue that relationship, even after Robert’s death. The String Quartet in A Minor, Op. 5, No. 2, opens (Allegro non troppo) with an expansive four-note melody that leaps up and down and encompasses a full octave. It includes the notes F–A–E, which were the motto theme of Brahms’s friend the violinist Joseph Joachim. The notes stand for Frei, aber einsam (“Free, but alone”). The movement ends with that theme in imitative counterpoint, each instrument playing some version of it but entering at different times so that they overlap.

The slow second movement (Andante moderato) is one of Brahms’s signature lyrical melodies. The calm is interrupted twice, however, by fierce tremolos (fast bowing on the same note) in the inner parts and by an intensely dramatic, almost opera-like declamation in the first violin and cello. The dreamy reverie returns, and the movement ends serenely.

The third movement (Quasi minuetto, moderato) starts delicately, in the high ranges of the violins. The mood is abruptly changed by a faster, fugue-like passage. It is worthwhile to remember that Brahms was an admirer and a champion of the works of Johann Sebastian Bach.

The violin opens the Finale (Allegro non assai) with a dramatic statement, echoed by the cello. Once again, canons and other Baroque techniques abound, sometimes in the intense rhythms of a Slavonic dance, other times as a gentle waltz.