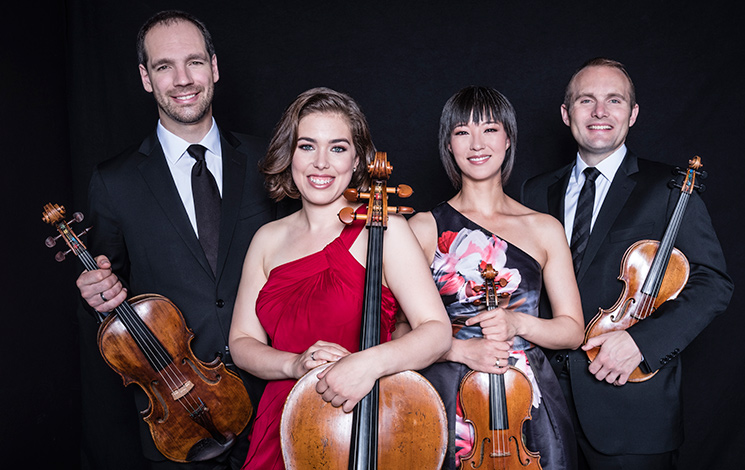 www.jasperquartet.com
From Maverick to Woodstock: in the Spirit of the 60s VI

Winner of the prestigious CMA Cleveland Quartet Award, Philadelphia’s Jasper String Quartet is the Professional Quartet in Residence at Temple University’s Center for Gifted Young Musicians and the Founder and Artistic Director of Jasper Chamber Concerts. The Jaspers have been hailed as “sonically delightful and expressively compelling” (The Strad) and the New York Times named their latest album, Unbound, as one of the 25 Best Classical Recordings of 2017.

“The Jaspers… match their sounds perfectly, as if each swelling chord were coming out of a single, impossibly well-tuned organ, instead of four distinct instruments.”
– New Haven Advocate

From Maverick to Woodstock: In the Spirit of the 60s VI

The Jasper String Quartet, which is based in Philadelphia, was formed in 2006 at the Oberlin Conservatory, where its founder members were studying. Two years later, the ensemble swept several major contest prizes, perhaps the most significant of which was the prestigious Chamber Music America Cleveland Quartet Award. For the last three years, the group has curated Philadelphia’s Jasper Chamber Concerts, at which they perform world classics and the music of local composers. The musicians of the Jasper String Quartet take both musical education and the work of contemporary composers very seriously and have commissioned works from many of the latter. They take their name from Jasper National Park in Alberta, Canada.

First violinist and founder member J Freivogel won several prizes and awards at Oberlin before moving on to study quartet performance at Rice University’s Shepherd School of Music. He also took a diploma at the Yale School of Music (a career path followed by other quartet members), studying there with members of the Tokyo String Quartet. He is married to the Jasper’s cellist, Rachel Henderson Freivogel. Robert Anemone is replacing regular second violinist Karen Kim, who is absent for family reasons. With a degree from the New England Conservatory, Robert has won several violin contests and currently plays with the symphony orchestras of North Carolina and Portland, Maine. From 2015 to 2017 he was a member of the Larchmere String Quartet, and he has conducted many master classes. Violist Sam Quintal, also a founding member, has the distinction of having been born and raised in a log cabin in Alaska that had only wood for heating and no running water. He survived and flourished, and went on to follow the familiar route: Oberlin, Rice, and Yale. Cellist Rachel began studies at age four in her birthplace of Ann Arbor, Michigan. She, too, went the Oberlin-Rice-Yale route, was asked by Freivogel to join the quartet on its formation, and married him five years later.

Hugo Wolf lived a brief and mostly unhappy life. Born in Slovenia—which was then part of the Austro­Hungarian Empire—he shares an ancestor with the conductor Herbert von Karajan. He seems to have been suffered from manic-depression, alternating bursts of radiant creativity with deep depressions. Often angry and quarrelsome, Wolf depended heavily on the generosity of wealthy friends to keep afloat. He was a fanatic admirer of Wagner, and thought that he, too, should write operas, but his only completed one failed, and he is remembered principally for his remarkable songs. There were over three hundred of these, many on texts by Goethe, Eduard Mörike, and Joseph Freiherr von Eichendorff, as well as the Spanish and Italian Songbooks; they are rightly regarded as the peak of nineteenth-century German Lieder. The brief but charming Italian Serenade, Wolf’s only work apart from the songs to have remained in the repertoire, is related to one of the Eichendorff Lieder, about a soldier singing a serenade to his love. Wolf originally intended it to be in three, then four, movements, but though he is said to have written more, no music survived his death, in 1903, at the age of forty-three. Wolf suffered from syphilis; he was committed to an asylum and released. After a suicide attempt, he asked to be returned, and he never heard the Serenade performed. It is an enchanting miniature, exquisitely scored, with a tripping, witty, dancing theme alternating with lyrical outpourings by the cello and viola. Wolf later scored it for string orchestra, and others have done the same.

Ludwig van Beethoven had just completed his labors on his opera Fidelio, and the revolutionary Eroica Symphony was a year behind him, when he returned to the string quartet in 1806, eight years after his Op. 18 set, which had been still very much in the manner of Mozart and Haydn. The differences in style, emotional weight, and profile are immediately evident in the later works. Commissioned by Count (later Prince) Andrei Razumovsky, the Russian ambassador to Vienna, Op. 59 forever extended the range and profile of the string quartet. The pieces are longer, more adventurous, more emotional, and more technically challenging than any that had come before. They were criticized at the time by players for their difficulty, and by critics for their flouting of what were believed to be the rules of quartet writing. A violinist who questioned the validity of Beethoven’s vision was told by the composer: “Oh, it’s not for you, but for a later age.” It’s good to be able to flatter ourselves that we live in that later age, and can appreciate these Op. 59 works for the miracles they are.

The first of the three Razumovsky Quartets is also the longest and most expansive. The first movement, certainly the composer’s most striking quartet movement up to that time, begins with a strong cello melody with a throbbing accompaniment, which is then taken up by the violins. It seems as if it could become an endless flow, but a potent second theme develops, and tensions build as the music moves higher, as if striving for a huge statement that can never quite be reached. The development is full of surprises, including, in mid-movement, a strenuous fugue. The scherzo does seem like a joke; it is built out of a series of single cello notes that Beethoven’s contemporaries laughed at. But the theme is then expanded and developed with endless ingenuity and imagination. The adagio is powerfully moving, founded on a long and deeply melancholy song that makes its leisurely way among the instruments. Lighter gleams are rare in a movement where Beethoven seems to be drawing from the depths of sadness and despair. Only toward the end does the mood lighten, as the music plunges without a break into the last movement. Razumovsky wanted a Russian theme in each of the quartets, and here the composer found a rather sad one in the Dorian mode, which he then treated as lighthearted and energetic. This makes its way, again with great inventiveness, toward a wonderfully invigorating coda that seems to triumph over the doubts and tensions that have come before.

Julia Wolfe is a MacArthur Fellow and Pulitzer Prize-winning composer whose music, written in classical forms, draws extensively on the energy and shapes of rock and folk music, with a dash of minimalism. This eclecticism is reflected in the fact that she was one of the founders of New York’s legendary Bang on a Can collective, and remains deeply involved in it. She is much interested in American labor history; her oratorio Anthracite Fields won the Pulitzer Prize in 2016, and the New York Philharmonic recently premiered another choral work, Fire in my Mouth, about the deadly Triangle Shirtwaist Factory fire of 1911. Her 1991 work Four Marys is, the composer says, influenced by a Scottish murder ballad as performed by Jean Ritchie, and is also inspired by the sound of the Appalachian dulcimer, the only stringed instrument Ms. Wolfe plays. It is basically an intense study in string sonorities, beginning with a low drone that gradually grows out of near-inaudibility to a series of upper-string gestures. There are violent and jagged arpeggios and sliding harmonies that move in and out of dissonance before the music gradually loses its volume and density and descends back to the quiet drone with which it began; wistful violin harmonics fade into silence.

Dmitri Shostakovich was at a pivotal point in his very strange career when he composed his String Quartet No. 9. He had recovered somewhat—both professionally and personally—from the suicidal mood in which he had written his Eighth Quartet. He had recently composed his rather banal Twelfth Symphony, and won official approval; the Thirteenth (Babi Yar), which again would draw official fire, was still in the future. And the composer was no longer alone, having recently married Irina Supinskaya, an editor at a music publishing house—this was his third marriage. He had earlier started a ninth quartet but, unusually for him, had burned it, and started anew in 1964, dedicating the new work to Irina. It is a striking work, certainly one of the most eloquent and beautifully crafted of his fifteen quartets, which are always seen as representing the very intimate, private persona of the composer, as opposed to his larger-scale symphonic works.

The work is played, like Shostakovich’s two previous quartets, without a break between the movements. And it has an odd shape; the first four of its five movements are comparatively brief, the last one twice the length of any of them. The first movement is flowing and lyrical, with a basically cheerful mien. The second is more impassioned and much slower, rising to a poignant climax then dying away. The third is one of his brisk, galloping scherzo-like movements, carrying echoes of Rossini’s William Tell overture, an apparent obsession of Shostakovich, who excerpted it at length in his Fifteenth Symphony. The fourth movement is again slower, but more angular than the second, with mournful sawing on the lower instruments followed by a series of pizzicato chords that develop into a sad theme; a soaring violin solo ends the movement. The expansive fifth movement begins hectically, like a reflection of the third, then develops a sort of perpetuum mobile accompanying figure. A violin aria is checked by a series of dead-sounding pizzicati, then the music begins to accelerate toward the end. This section—in fact, the whole movement—masterfully recalls themes from the preceding movements as it rises in intensity toward a radiant conclusion that is almost Beethovenian in its sense of triumph. If it’s true that all Shostakovich’s quartets bar the eighth are comparatively unknown, this one is perhaps the least deserving of such neglect.