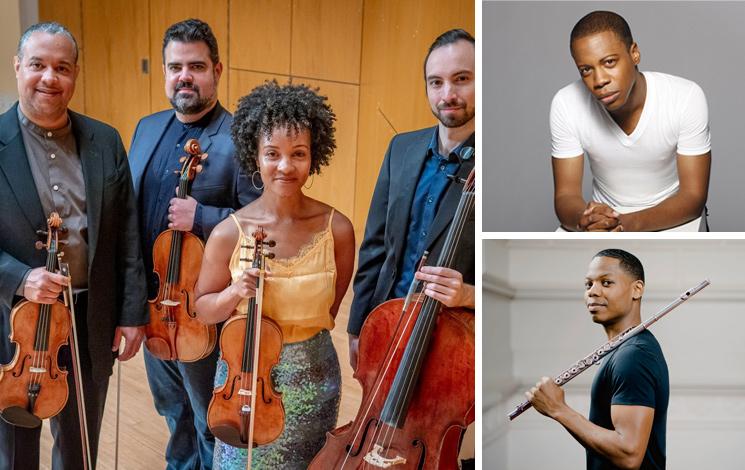 HARLEM QUARTET advances diversity in classical music while engaging new audiences with varied repertoire that includes works by minority composers. Their mission to share their passion with a wider audience has taken them around the world; from a 2009 performance at The White House for President Obama and First Lady, Michelle Obama, to a highly successful tour of South Africa in 2012, and numerous venues in between. The musically versatile ensemble has performed with such distinguished artists as Itzhak Perlman, Ida Kavafian, Carter Brey, Fred Sherry, Misha Dichter, Jeremy Denk, and Paquito D’Rivera. The quartet also collaborated with jazz masters Chick Corea and Gary Burton on the album Hot House, a 2013 multi-Grammy Award winning release.

Acclaimed by the Baltimore Sun as “one of the biggest pianistic talents to have emerged in this country in the last 25 years” pianist TERRENCE WILSON has appeared as soloist with the symphony orchestras of Atlanta, Baltimore, Cincinnati, Dallas, Detroit, Houston, Washington, DC (National Symphony), San Francisco, St. Louis, and with the orchestras of Cleveland, Minnesota, and Philadelphia and the Saint Paul Chamber Orchestra. Conductors with whom he has worked include Christoph Eschenbach, Alan Gilbert, Neeme Järvi, Jesús López-Cobos, Lawrence Renes, Robert Spano, Yuri Temirkanov, Stanislaw Skrowaczewski, Gunther Herbig and Michael Morgan.

BRANDON PATRICK GEORGE is a leading soloist and Grammy-nominated chamber musician whose repertoire extends from the Baroque era to today. He is the flutist of Imani Winds and has appeared as a soloist with the Atlanta, Baltimore, and Albany symphonies; the American Composers Orchestra; and Orchestra of St. Luke’s Chamber Ensemble, among others. He has been praised as “elegant” by The New York Times, as a “virtuoso” by The Washington Post, and as a “knockout musician with a gorgeous sound” by The Philadelphia Inquirer. His debut album was released by Haenssler Classics in September 2020; The New York Times has described it as “a program that showcases the flute in all its wit, warmth and brilliance.”

Freedom and Joy: Duke Ellington, Joseph Haydn, and Voices of Color in American Music is supported in part by an award from the National Endowment for the Arts.