HARLEM QUARTET | Concert and Reception for the Friends of Maverick 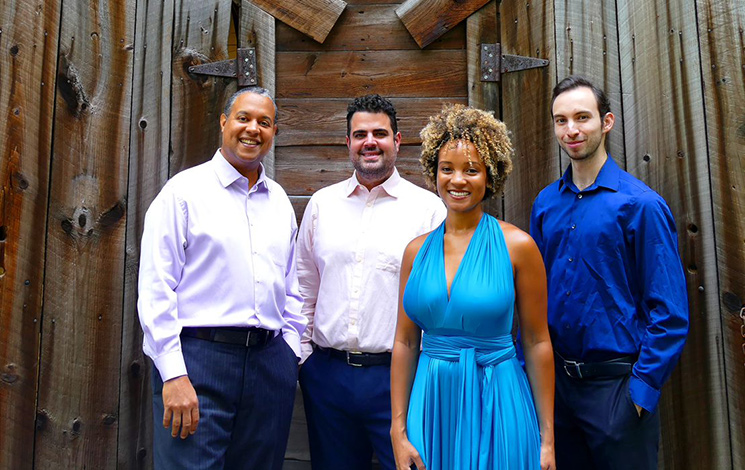 HARLEM QUARTET | Concert and Reception for the Friends of Maverick

New York-based HARLEM QUARTET, currently serving a three-year residency at London’s Royal College of Music, has been praised for its “panache” by The New York Times and hailed in the Cincinnati Enquirer for “bringing a new attitude to classical music, one that is fresh, bracing and intelligent.” It has also won plaudits from such veteran musicians as GRAMMY-winning woodwind virtuoso Ted Nash of the Jazz at Lincoln Center Orchestra, who declared in a May 2018 Playbill article, “Harlem Quartet is one of the greatest string quartets I have ever heard. They can play anything.” Since its public debut at Carnegie Hall in 2006, the ensemble has thrilled audiences and students in 47 states as well as in the U.K., France, Belgium, Brazil, Panama, Canada, Venezuela, Japan, and South Africa.


Admission is by donation. Donors to Friends of Maverick of $75 since August 24, 2018 receive a ticket for one unreserved seat to the concert & reception. Donors of $150 or more receive two tickets. Regular Maverick tickets are not valid for this concert and there is no “Rock Bottom” seating.

When this transaction is complete, you will receive an e-mail confirmation which you should bring to the box office when you pick up your tickets.

A Concert for the Friends of Maverick
HARLEM QUARTET

The Harlem String Quartet exemplifies diversity, not only in its membership but also in the eclecticism of the music it plays, which ranges (as in today’s program) from classics to jazz. The New York-based group was founded by the Sphinx Organization and trained at the New England Conservatory. They have played in forty-seven of the states, and toured throughout Europe, Latin America, Japan, and South Africa. Currently they are the quartet-in-residence at the Royal College of Music in London. They have performed for the Obamas at the White House, and have collaborated with many celebrated classical and jazz musicians. Their recording Hot House, with the great jazz pianist Chick Corea, won several Grammy awards. First violinist Ilmar Gavilán was born in Havana into a musical family and received his early musical education there before going on to study in Moscow, Spain (under royal patronage), and finally at the Manhattan School of Music. He has been a soloist with many U.S. orchestras, and has been a recitalist in the United Kingdom, Russia, Spain, and Portugal. Second violinist Melissa White came up through the Curtis Institute and the New England Conservatory. She has toured Japan with the Orpheus Chamber Orchestra, and a recording she made with Chick Corea and Gary Burton, Mozart Goes Dancing, was a triple Grammy winner. She is also the group’s very successful grants writer. Violist Jaime Amador was born in Puerto Rico, where he played with the Puerto Rico Symphony before moving to the U.S. mainland to study at The Juilliard School, the Manhattan School of Music, and the New England Conservatory. Amador joined the Harlem Quartet in 2012. Cellist Felix Umansky was born in Indiana and holds degrees from the Cleveland Institute and Yale, where he has been artist-in-residence. He was a founding member of the award-winning Linden Quartet, in which he played for six years before joining the Harlem five years ago. János Starker was among his teachers, and he teaches many master classes in his instrument.

Johannes Brahms was a ruthless perfectionist, and had destroyed about twenty string quartets before he was satisfied. His third work in the genre, Op. 67, was written in 1875, at a time when he was still struggling with his First Symphony. He described it whimsically as “a useless trifle,” written “to avoid facing the serious countenance of a symphony.” Although it was written for a cellist friend, Dr. Theodore Engelmann, there is no prominent cello part, but instead, said the composer, “such a tender viola solo you may want to change your instrument.” According to violinist Joseph Joachim, it was Brahms’s own favorite among his quartets. It is a remarkably sunny work, cheerful and with flashes of humor. Brahms was a keen student of previous generations of composers, and both Mozart and Beethoven can be heard as models in parts of Op. 67. The opening, with its cheerful horn calls, certainly has echoes of Mozart’s K. 458 “Hunt” quartet, and the finale, with its variations, pays tribute to Beethoven’s “Harp.” The horn call theme is sounded loud and answered softly, almost as in a child’s game of peek-a-boo; this is followed by a second theme, simple and light-hearted, a repeated run up the major scale. The two ideas are combined in a masterful way, and the movement ends with the gathering acceleration Brahms often brought to the conclusion of his symphonic movements. The second movement is a lovely and expansive song, probably as close as the composer came to a love song. An assertive central section changes the mood, but this also becomes tender and ruminative before the opening melody returns, beautifully decorated and with growing passion, then subsides to a magical hushed close. In the third movement, the viola is given its star turn, a rather anxious, reaching theme with a throbbing accompaniment from the much-subdued other instruments. The melody is broken up into fragments before being reassembled, a masterly display of Brahms’s musical sleight of hand. The chief theme of the last movement is another cheerful one that also takes a yearning turn. It is treated to a brilliant series of variations (a form of which Brahms was a master) before, toward the end, the hunting calls of the first movement return and thrust the quartet to an emphatic close.

Joseph Haydn had already written one set of genre-bending quartets, Op. 20, when in 1781 he composed the set of six comprising his Op. 33. In it he took his expansion of the range and style of the quartet even further, changing conventional expectations of the shape of his movements and employing a scherzo movement (instead of the customary minuet) in each of the six. Haydn always had a playful nature (the “Surprise” Symphony, for example), but it was a sign of his confidence in his mastery of the medium that he was prepared, and able, to make a quartet built on false expectations, as this No. 2 in the Op. 33 set was. The obvious joke comes at the false expectations aroused at its ending, but there are others too. The opening movement, for instance, begins with a gracious, dance-like, swaying tune, but its attempts to morph into a rather grander statement are constantly undermined by little flutters that act rather like banana peels in the path of a walker who takes himself too seriously. The scherzo begins with a thumping, heavy-footed sort of dance that is then broken up into snippets of motifs. The trio is accompanied by weird swoops from the first violin, almost like a parody of string playing. The graceful and tuneful slow movement is the only really serious one, its sweet melody nobly supported by the cello. There is a lot of dynamic contrast here; the development of the theme alternates between piano and forte. The presto finale, a rondo, has a slapdash, skittering theme, as if someone were speaking breathlessly. This goes around and around, and it seems as though the quartet will end with a final statement of it, when phrases from the solemn slow movement reappear to interrupt. After a pause, the rondo theme makes what seems to be a final appearance. The audience in Haydn’s time would begin to applaud here, only to be confounded with a final appearance of it, like a hasty afterthought. It’s a joke that still often works: Let’s see if the sophisticated Maverick audience is fooled.

William Bolcom is one of the best-loved figures in American music, both popular and “classical.” He has won many prizes, including the Pulitzer, a National Medal of the Arts and several Grammys. Born in Seattle, he began studies in composition at the University of Washington at age eleven. He later studied with Darius Milhaud and Olivier Messaien at the Paris Conservatoire. Back in the United States, he joined the faculty at the University of Michigan’s music school in 1973 and retired from there thirty-five years later as Distinguished Professor of Composition. A noted composer of classical works in every genre, he is probably best known to a wider public as the man who brought ragtime back to America, with his rediscovery in the 1970s of Scott Joplin and his works. This resulted in the return to the repertoire of Joplin’s opera Treemonisha and the unforgettable use of his music in the Paul Newman and Robert Redford movie The Sting. Bolcom has recorded as a pianist extensively with his wife, mezzo-soprano Joan Morris; together they have put out twenty-five albums of show music and popular songs. His Three Rags for String Quartet consist of reworkings of two of his many piano rags, “Poltergeist” and “Graceful Ghost,” and a piece written especially for quartet, “Incineratorag.” They are supple and elegant to the ear, with the special syncopated sound of ragtime and featuring a melodic top line sounding against a halting two-four beat. “Poltergeist” has a ghostly main theme and a decidedly otherworldly atmosphere, with frequent tremolos and spooky pizzicatos. ”Graceful Ghost,” written in memory of Bolcom’s father, is mournful and elegiac despite its perky ragtime beat, with an air of gentle regret and nostalgia. “Incineratorag” is the most traditionally ragtime of the pieces, with the familiar dancing gait, a minor-key central section, and a buoyant conclusion.

John Birks (“Dizzy”) Gillespie was one of the greatest of jazz trumpeters, as well as being a composer, arranger, and vocalist. Everyone has a mental picture of him, with his peculiar bent horn, his neat little beard, his beret, and his puffed-out cheeks as he blew. He played with most of the jazz greats of the forties and fifties, including Cab Calloway and Charlie Parker, and was a pioneer in the new style of jazz that in the early 1950s came to be known as be-bop. He wrote “A Night in Tunisia” in 1941 or 1942; legend has it that he initially beat out the basic rhythm on a garbage can in Texas. He called the now wonderfully familiar music “Interlude,” but according to Dizzy, “some genius decided to call it ‘Night in Tunisia,’” perhaps because of its rather Arabic-sounding melodic shape. It was arranged for the Harlem Quartet (with their participation) by a West Coast trombonist and teacher named Dave Glenn. It succeeds remarkably well as a quartet piece, with the cellist taking the bassist’s role in a jazz group and with skillfully wrought instrumentation of Gillespie’s unforgettable themes. This piece shows, as does the Bolcom before it, how refreshingly a predominantly classical medium like the string quartet can make a smooth transition into an entirely different music, and still sound like itself.