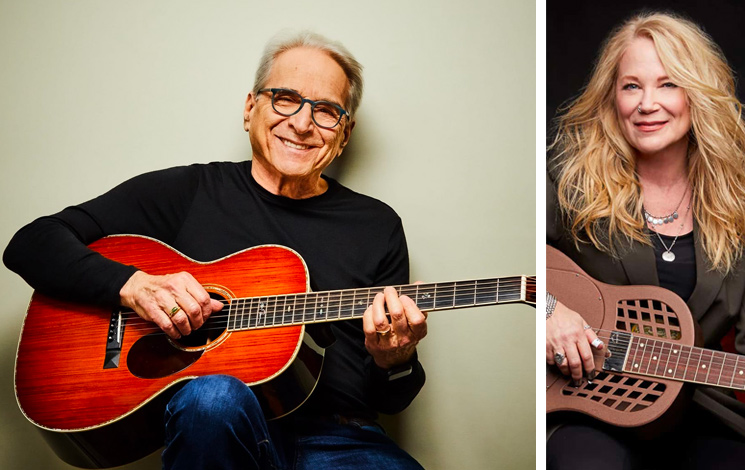 Happy is very excited to make this concert a CD Release event! His brand new album, “There’s a Bright Side Somewhere,” will be available for the first time at this Maverick concert. Three of the players – Cindy Cashdollar, Ryan Berg, and Eugene Ruffolo – are featured on the recordings, as are many other local and internationally-known musicians. This is Happy’s first new release in seven years, and it will be launched worldwide in the coming weeks. Many of the songs that you’ll be hearing at this show are featured on this CD.

Renowned folk singer, writer, teacher, recording artist and first-rate fingerstyle guitarist Happy Traum began playing guitar and 5-string banjo as a teenager, and was an important participant in the legendary Greenwich Village folk scene of the 1950s and ‘60s. He was a student of blues guitar legend Brownie McGhee, a major influence on his picking style.

Happy has played in concerts, clubs and festivals throughout the U.S., Canada, Europe, Australia and Japan, both solo and with his late brother, Artie Traum, with whom he performed for more than 40 years. Their performances at the 1968 and 1969 Newport Folk Festivals helped to gain them an avid following and a contract with famed manager Albert Grossman.

Dobro and lap steel guitarist Cindy Cashdollar is a five-time Grammy recipient. A Woodstock native, she earned her wings playing with local artists such as John Herald, Paul Butterfield, Levon Helm, Rick Danko and Happy & Artie Traum. After touring for nine years with the premier Western swing band, Asleep at the Wheel, she has become the “go-to” guest musician for some of the top artists of our time, including Bob Dylan, Van Morrison, Lyle Lovett, Willie Nelson, Rory Block, Rod Stewart, Amy Helm and many more. She was the first woman to be inducted into the Texas Steel Guitar Hall of Fame in 2011; was inducted into The Texas Music Hall of Fame in 2012; and was nominated as Instrumentalist of the Year by the Americana Music Association.

Multi-instrumentalist David Mansfield is the son of classical musicians and was formally trained as a violinist. At the age of 18, he joined Bob Dylan’s band, recording three albums and touring with the “Rolling Thunder Revue.” In 1976 David was signed to Arista and released three albums (two of which he co-produced with T-Bone Burnett and Steven Soles) as a member of the critically acclaimed “Alpha Band.” David is an award-winning film and television composer, having worked with such luminaries as Oliver Stone, Michael Cimino, Walter Hill, Robert Duvall and many others.

A prolific and deeply personal songwriter, Eugene Ruffolo has won first prize in both the prestigious Telluride Bluegrass and Merlefest songwriting competitions. In addition to his original music, Eugene’s unique vocal talents have made him a favorite of many prominent artists, with whom he has shared the stage. Both in the studio and in live performance, he has worked with artists as diverse as Garth Brooks, Tony Bennett, Kenny Loggins, David Wilcox, Run DMC, Mary Chapin Carpenter, Lori Lieberman, Spyro Gyra, Cheryl Wheeler, and Livingston Taylor to name a few.

Ryan Berg has made himself a staple on the New York jazz scene and traveled throughout the world. Some of the musicians he has played and/or recorded with include: Gregory Porter, Ravi Coltrane, Mark Whitfield, Lindsey Webster, JD Allen, Jeff Coffin, Lenny White, Rashid Ali, Gerald Clayton, Logan Richardson, Roy Hargrove, and Happy Traum. In addition, he has played on many albums, been a band member for a television show produced by Kelsey Grammer, and played as a member of the Broadway shows “Jersey Boys,” “Hadestown,” and “Summer.”