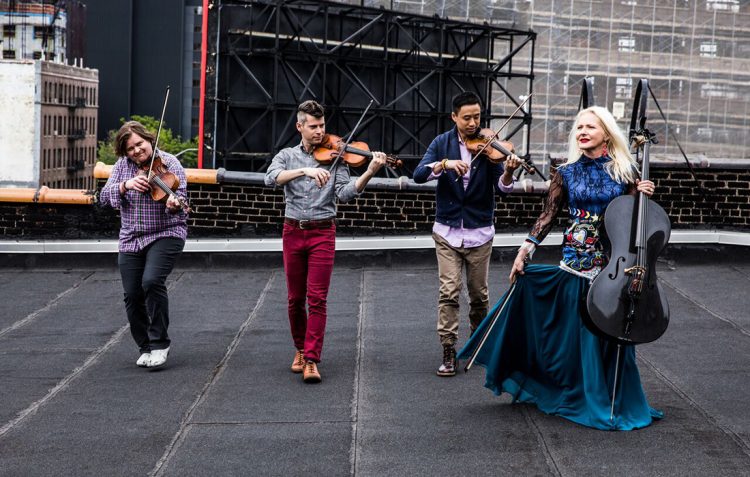 New Foundations: Toward a Modern Chamber Music Repertoire is a mini-festival of chamber music composed in the last thirty years. The series is supported in part by an award from the National Endowment for the Arts.

Program listed alphabetically by composer. Order of pieces and intermission will be announced from the stage.

ETHEL has been acclaimed as “unfailingly vital” by the The New York Times; as “brilliant,” and “downtown’s reigning string quartet” by The New Yorker; and as “one of the most exciting quartets around” by The Strad magazine. The quartet invigorates the contemporary music scene with exuberance, intensity, imaginative programming, and exceptional artistry.

At the heart of ETHEL is a quest for a common creative expression that is forged in the celebration of community. As cultural and musical “pollinators,” the quartet brings its collaborative discoveries to audiences through multi-dimensional musical repertoire and community engagement.

From 2004 to 2014, ETHEL served as ensemble-in-residence at the Grand Canyon Music Festival’s Native American Composers Apprenticeship Project. The group’s ongoing dedication to working with indigenous people and music culminated in the 2010 release of Oshtali: Music for String Quartet, the first commercial recording of American Indian student works.

ETHEL’s debut CD was a Billboard Magazine “Best Recording of 2003.” Its second CD, Light, ranked number three on Amazon.com’s “Best of 2006” and number five on WNYC’s “Best of 2006 Listener Poll.” The group’s CD Heavy was released in 2012 to great critical acclaim. Recordings of ETHEL’s Documerica and The River, a collaboration with Taos Pueblo flutist Robert Mirabal, were released in the fall of 2015. ETHEL has appeared as a guest artist on many albums, including in 2014 The Paha Sapa Give-Back by Jerome Kitzke; Cold Blue Two, Glow by Kaki King, Blue Moth by Anna Clyne, A Map of the Floating City by Thomas Dolby, and The Duke by Joe Jackson, all in 2012; John the Revelator: A Mass for Six Voices by Phil Kline with the vocal ensemble Lionheart in 2008; and the Grammy-winning Dedicated to You: Kurt Elling Sings the Music of Coltrane and Hartman in 2009.

ETHEL’s 2016-2017 season celebrates the diversity of regional American music, anchored by a national tour of the evening-length Documerica. Described by The New York Times as “new music bonding with old images in rich, provocative and moving ways,” this program, directed by Steve Cosson, features montages by acclaimed projection artist Deborah Johnson in concert with commissioned work by Mary Ellen Childs, Ulysses Owens Jr., Jared Impichchaachaaha’ Tate, and James “Kimo” Williams, as well as original music by the members of ETHEL.

Throughout the season. ETHEL will be on tour with several of its critically acclaimed signature programs, including The River and Grace, an introspective program featuring ETHEL’s arrangements of music by Ennio Morricone and Jeff Buckley. Other highlights include the world premiere at National Sawdust of Pulitzer Prize-winner Julia Wolfe’s The Blue Dress, which was commissioned by ETHEL; performances of new and existing repertoire as the resident ensemble at the Metropolitan Museum of Art’s Balcony Bar; and interdisciplinary activities as Ensemble-in-Residence at Denison University. While on tour and at home, ETHEL offers in-depth residency and community outreach to connect a broad spectrum of audiences and students to its music.

Violist Ralph Farris, a founding member and artistic director of ETHEL, is a Grammy-nominated arranger, a member of the orchestra for the original Broadway production of The Lion King, and former musical director for Roger Daltrey of The Who. He has worked with Leonard Bernstein, Martin Scorsese, Depeche Mode, Natalie Merchant, Harry Connick Jr., Allen Ginsberg, Yo-Yo Ma, and Gorillaz. A graduate of Walnut Hill School for the Arts, Ralph earned his bachelor’s and master’s degrees from The Juilliard School.

Cellist Dorothy Lawson, a founding member and artistic director of ETHEL, has performed with the Orpheus Chamber Orchestra, the White Oak Dance Project, Philharmonia Virtuosi, the American Symphony Orchestra, the Toronto Symphony Orchestra, and numerous new music ensembles. Canadian-born, she completed degrees at the University of Toronto, the Vienna Academy, and The Juilliard School. She teaches in the Preparatory Division of Mannes College at the New School in New York City.

Violinist Kip Jones is known for his ebullient and innovative solo performances in a style he describes as “experimental folk.” A modern musical troubadour, he has performed at scores of eclectic venues, such as Ecuador’s Ministry of Economic Inclusion, the Jordan Misja Liceu Artistik in Tirana, Albania, and the platforms of most subway systems in North America. He has played two miles inside the Chom Ong Cave in Laos, and in the summer homes of nomadic Mongolian herders. As a composer, Kip’s work has been commissioned by ensembles that include the Lake Superior Chamber Orchestra and A Far Cry. A native of Minnesota, Kip earned his degree in violin performance from the Berklee College of Music, which is known for the study of jazz and modern American music and is the largest independent college of contemporary music in the world.

Violinist Corin Lee is one of the most sought-after violinists of his generation. He has appeared on the great American stages, traditional and otherwise—from Carnegie Hall’s Stern Auditorium to The Smithsonian National Portrait Gallery, from Alice Tully Hall at Lincoln Center to the Electric Daisy Carnival Las Vegas, one of the biggest electronic dance music festivals in the world. Corin’s performances have been broadcast on Fox, CBS, and NBC News. Steve Reich has called Corin’s electronic arrangements “musically marvelous,” and they have set the new standard for innovation in solo string performance. Corin received his bachelor of music degree from The Juilliard School and his master’s of music degree from Yale School of Music. In addition to concert work, he directs Liberated Performer, a program that guides and trains musicians to defeat performance anxiety.