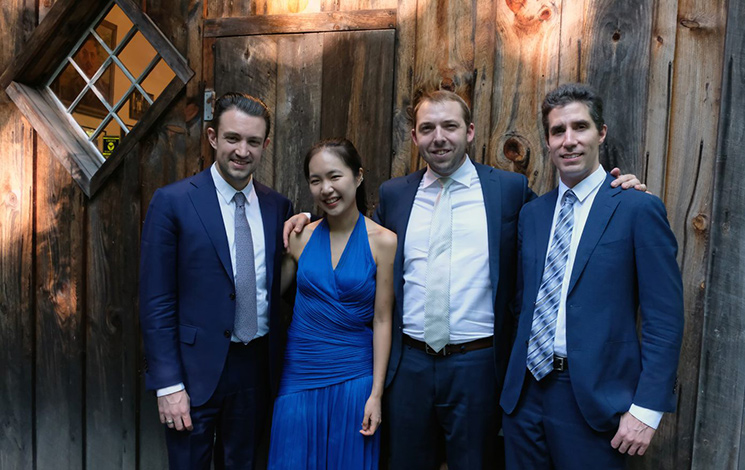 www.escherquartet.com
From Maverick to Woodstock: in the Spirit of the 60s IV

The Escher String Quartet has received acclaim for its expressive, nuanced performances that combine unusual textual clarity with a rich, blended sound. The quartet has made a distinctive impression throughout Europe, performing at venues such as Amsterdam Concertgebouw, Berlin Konzerthaus, London’s Kings Place, Auditorium du Louvre and more. With a strong collaborative approach, the ensemble has appeared worldwide to rave reviews.

“Any chance to attend one of their performances should not be missed!”
– Edward Sava-Segal, Bachtrack

The Escher String Quartet, formed in 2005 when its founding members were students at the Manhattan School of Music, may be one of the younger quartets to perform at Maverick, but it has created an impressive profile in its comparatively brief life. Mentored in its youth by the members of the Emerson Quartet, the Escher found early recognition as a BBC New Generation Artist, and was chosen by such stars as Pinchas Zuckerman and Itzhak Perlman for their summer music festivals. It has received the prestigious Avery Fisher Grant, and performs regularly at London’s famed Wigmore Hall. The Escher has toured widely in Europe and plays at many notable American music events. Among its recent and admired recordings are complete traversals of the quartets of Mendelssohn and Alexander von Zemlinsky. The quartet takes its name from the Dutch artist M.C. Escher, inspired by the way in which he used the interplay of individual elements to create a satisfying whole—their ambition as a quartet.

Adam Barnett-Hart, first violin, was a founding member of the group, studying at Juilliard as well as the Manhattan School, and working at one stage with Zuckerman. He made his concerto debut at the age of nineteen playing the Brahms with the Juilliard orchestra, and has since made many other solo concert appearances. Brendan Speltz, brother of cellist Brook, is replacing the quartet’s usual second violinist Danbi Um, who has an injured hand. Born in Los Angeles, Brendan received his master’s degree at the Manhattan School of Music, and has played with many chamber groups as well as with the American Symphony and the Orchestra of St. Luke’s. He is a keen advocate of making music available to young listeners. Pierre LaPointe, viola, the other founding member of the Escher, began as a violinist before switching, and also studied composition. He has a doctorate from The Manhattan School and currently teaches at Southern Methodist University, where the group is quartet-in-residence. Cellist Brook Speltz is another comparative newcomer to the group, joining four years ago. Born in Los Angeles, he studied at The Curtis Institute of Music with Peter Wiley and is active in a variety of genres, including in the cello rock band Break of Reality, which raises funds for music programs in public schools.

It was Joseph Haydn’s Op. 20 set of six quartets that essentially earned him the compliment of “father of the string quartet.” These works are regarded as one of the keystones of quartet writing, in which the four-movement format, the subtle interplays of the four individual instruments, and the introduction of qualities of passion and emotion into the music all took them far beyond the galant stylings of previous quartet composers. They were much admired and studied by his great successors Mozart (who wrote a set of “Haydn” quartets in tribute) and Beethoven—rather grudgingly by the latter, who was always resentful of the older composer’s criticism of some of his own early efforts. Brahms actually owned the autograph score in Haydn’s hand.

Haydn was already forty years old, and well established as Kappellmeister at Esterházy Palace, when he composed the Op. 20 set in 1772. It was at a time when new ideas about man and nature were sweeping Europe, and Haydn was not unaware of them. He was particularly drawn to the notion of Sturm und Drang, the “storm and stress” that exalted human feeling above the artifice of the courtly style, and it crept into much of his music, especially the middle-period symphonies and some of these quartets. In fact, two of the Op. 20 set are in minor keys, unheard of in quartet writing of the time. The Quartet Op. 20, No. 2, was in fact the second to last in order of composition and, if it is not the most dramatic, is probably the most varied in its moods of the six. It begins with a graceful cello melody above the accompanying other instruments, which then take up the theme in turn. The effect is of a sweet, dancing conversation that ranges chromatically through a number of keys, interrupted by several striking unison gestures, before a quiet ending. The second movement opens with a dramatic declarative unison—the very essence of Sturm und Drang. This is followed by a series of scale-like solo flights, interrupted by further dramatic unison gestures. This is repeated, with minor variations, before the music breaks into a sad, yearning song with a rocking accompaniment and trills exchanged among the instruments. The Minuetto has the shape of a dance, but is so varied in color and tempo that it would be quite undanceable. It ends with a remarkable muted unison statement. The fugal finale is, once again, a novelty. It is hardly recognizable as a fugue in the formal Bachian sense, but is a helter-skelter, scurrying exchange among the instruments, exhilarating in its swiftness and ingenuity. There is a delightful rush to a light, still fugal conclusion.

Dmitri Shostakovich led an unhappy life, to put it mildly. He was a great composer who chose, unfathomably, to remain in a Soviet Union that frequently oppressed him and scorned his music unless he was writing in an officially approved manner. He nevertheless kept working, and created a body of work remarkable for its range and depth. This is nowhere more true than of his fifteen string quartets, which are usually seen as the works most expressive of his profoundest thoughts and feelings, far away from the “public square” side that often emerged in his symphonies and patriotic cantatas. They are seen, quite rightly, as the finest quartets written in the twentieth century, apart, perhaps, from Bartók’s. The tenth quartet was written several years after the remarkable eighth quartet, in a burst of creativity that produced the ninth and tenth in his few weeks’ stay at a musicians’ retreat in Armenia in 1964. The music has been described by some Russian critics as cheerful, but it hardly seems so to the contemporary listener. While not as anguished and almost suicidal as the eighth quartet, the tenth is still often somber and harrowing. The opening andante, alternately angular and graceful, has a recurring viola motif that has been likened to an attack by bees. The succeeding allegretto raises the temperature considerably. It is a headlong rush, full of slashing attacks in an urgent tempo that presses ruthlessly ahead without pause; if this were in a symphony, it would be brassy. Toward the end, which comes abruptly, there are some intensely harsh discords. The adagio begins with a lamenting cello, followed by a violin and forming a theme that becomes the basis for a series of variations whose tone is of reflective sorrow. The movement merges without a break into the final allegretto, which is like a combination of the first and second movements, with fragments of themes from both. In the elaborate working out the music rises to a considerable climax, but the quartet ends in no more than a haunted wisp of sound. As with most of the Shostakovich’s quartets, it is deeply emotional.

Bedřich Smetana’s first quartet is also a powerfully emotional piece, which has the unusual feature of being frankly autobiographical—a sort of musical memoir. As the composer himself put it: “My intention was to write a tone-picture of my life.” It was a life much beset by tragedy. He lost three of his four daughters early, and was for a time forced into exile in Sweden. Although widely hailed as the father of Czech national music, his own music was later greatly eclipsed by that of his countryman Antonín Dvořák. He is now chiefly remembered for his evergreen opera The Bartered Bride, the stirring set of tone poems that comprise Ma Vlast, and the quartet programmed today. Like Beethoven, Smetana suffered from deafness, which gradually worsened and became complete around the composition of his first quartet in 1876, forcing him to abandon his musical positions. Although he continued to compose, eventually madness overtook him, and he died at sixty in the Prague asylum.

The quartet begins with a long and impassioned viola solo with a rocking accompaniment. This movement depicts, said Smetana, “my youthful leanings toward art, the romantic atmosphere, inexpressible yearning, and also a kind of warning of my later misfortune.” This opening theme is particularly eloquent and heartfelt, and references to it recur throughout the work. A second theme shows his “affection for romance, in music or love,” and the two are worked out together, the second one dominating. The second movement is a polka—one which, unlike the dance themes found in some quartets (see Haydn note, above), is eminently danceable. It was designed to portray, said Smetana, his lifelong love of dancing, and his happiness in doing so. The largo movement, introduced by the cello, followed by a nostalgic, yearning song from the violin, “reminds me of the happiness of my first love, the girl who later became my faithful wife.” The variations that follow turn darker in sorrow; in fact Smetana’s wife was taken from him prematurely by illness. The final movement shows Smetana’s whole-hearted involvement in “the national elements of music.” It begins with another rapid dancing theme that whirls faster and faster until, against a tremolo from the lower strings, the first violin holds a sustained high note. This represents the onset of Smetana’s deafness, an imitation of the tinnitus, or ringing in the ears, that is a warning sign. Then earlier, happier themes are recalled before the music sinks to a quiet, apparently resigned, close on a hushed pizzicato.