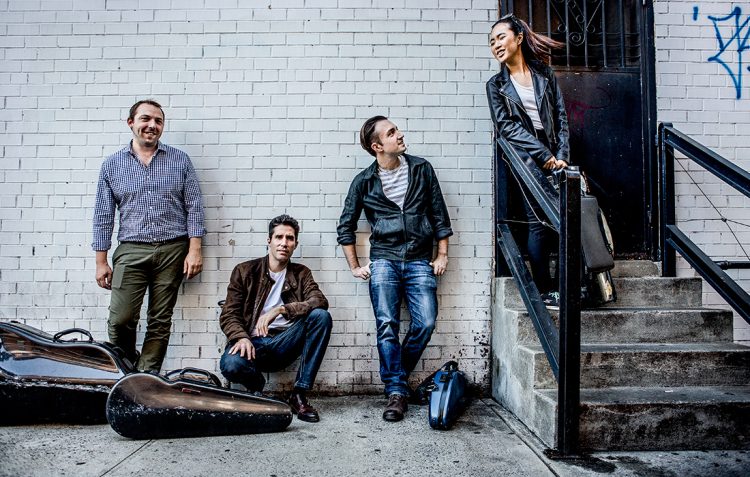 The Escher String Quartet has received acclaim for its profound musical insight and rare tonal beauty. Former BBC New Generation Artists, the quartet has performed at the BBC Proms at Cadogan Hall and is a regular guest at Wigmore Hall. In its home town of New York City, the ensemble serves as Season Artists of The Chamber Music Society of Lincoln Center, where it not only presented the complete quartets of Alexander Zemlinsky in a concert streamed live from the Rose Studio, but was also one of five quartets chosen to collaborate in a complete presentation of Beethoven’s string quartets.

Within months of its formation in 2005, the ensemble came to the attention of key musical figures worldwide. Championed by the Emerson Quartet, the Eschers were invited by both Pinchas Zukerman and Itzhak Perlman for residencies at their respective summer festivals. Artists the quartet has collaborated with include David Finckel, Leon Fleisher, Wu Han, Lynn Harrell, Cho-Liang Lin, Joshua Bell, Paul Watkins, and David Shifrin. In 2013, the quartet became one of the very few chamber ensembles to be awarded the Avery Fisher Career Grant.

The Escher Quartet has made a distinctive impression throughout Europe, with recent debuts at the Amsterdam Concertgebouw, Berlin’s Konzerthaus, London’s Kings Place, the Slovenian Philharmonic Hall, and Auditorium du Louvre. The group has performed at the Tel Aviv Museum of Art, has toured Israel and the UK, and has appeared at festivals such as the Heidelberg Spring Festival, Dublin’s Great Music in Irish Houses, the Risør Chamber Music Festival in Norway, the Hong Kong International Chamber Music Festival, and the Perth International Arts Festival in Australia.

Alongside its growing European profile, the Escher Quartet continues to flourish in its home country, performing at Alice Tully Hall in New York, Kennedy Center in Washington, DC, and the Ravinia and Caramoor festivals. In 2014, the quartet gave a highly praised debut at Chamber Music San Francisco, and in 2015 made a video recording of a Schubert quartet for Music in Focus at Music@Menlo (California), where it returns in the current season.

The Escher’s first two volumes of the complete Mendelssohn quartets, released on the BIS label in 2015, were received with the highest critical acclaim. They complete the Mendelssohn series this season with the release of Volume III. The quartet has also recorded the complete string quartets of Alexander Zemlinsky in two volumes, which were named Classical CD of the Year by The Guardian, a recommendation in The Strad, Recording of the Month on MusicWeb International, and a nomination for a BBC Music Magazine Award.

The Escher Quartet takes its name from Dutch graphic artist M.C. Escher and his method of interplay between individual components working together to form a whole.

Schubert’s String Quartet No. 10 in E-Flat Major, D 87, Op. posth. 125, No. 1, was long thought to be a later work until the manuscript, discovered after World War I, revealed that the quartet had been written in 1813, when Schubert was only sixteen. Although this “little” quartet cannot compare with the harmonic adventurousness of his later works, this early piece foreshadows Schubert’s future skill at combining melody, accompaniment, and musical structure. It was undoubtedly written as Hausmusik, and would have been played by the Schubert family, with Franz playing the viola, his brothers the violins, and his father the cello. The work is monotonal, with all four movements in the key of E-flat major.

In the first movement (Allegro moderato), the violin takes the lead all of the way through, with the other instruments providing a variety of accompanying techniques—tremolo (fast bowing on a single note), pizzicato (plucked), and simple chordal harmonies. The thematic melodies are lush, foreshadowing the future greatness of Schubert’s songwriting ability.

The youthfulness and domestic character of the music can be seen in the simple opening of the Adagio. Except for one moment of angst (a single diminished chord, quickly resolved), the movement is a clear, sweet song with a gentle ending.

The Scherzo is marked Prestissimo (as quickly as possible). The opening line rises on a grace note and plummets to a held note. This figure suggests the braying of a donkey, and provides liveliness and fun to the movement. As usual, the central Trio, here in C minor, has a more lyrical character, but continues the rustic feeling with a folk-like tune and open-fifth double stops (two notes played with one bowing) in the cello.

The Finale (Allegro) features the violin once again, with the cello added as a second soloist.

Early assessments of Béla Bartók’s music tended to dismiss him for appropriating the folk music of his country’s ethnic populations. As his popularity grew around the globe, however, the musical world came to recognize him as one of the great composers of the twentieth century. Bartók was very popular as a performer when he came to the United States, and his String Quartet No. 3 won an international prize sponsored by the Musical Society Fund of Philadelphia.

To those who have difficulty with the seeming clashes of unusual intervals in Bartók’s music, it must be pointed out that dissonance is a relative term, both historically and geographically. In Europe in the early Renaissance, a major third (the essence of what we call a major chord) was an interval that had to be resolved to the more consonant fifth or octave. And Balkan folk music—the music Bartók collected and emulated in his compositions—contains intervals and cadences that would be judged dissonant in today’s mainstream European and American musical language.

In the first movement (Prima parte: Moderato), the violin’s opening motif is bounced from one instrument to another, then played by all together. Each rendition adds something—a slightly new rhythm, a longer phrase, a glissando (sliding up or down to a pitch), or a different texture. Bartók said that he did not like to repeat a musical thought unchanged.

This same motif is used as a bridge to the second movement (Seconda parte: Allegro). Intense plucked notes and staccato chords create an expectant mood as the music builds in speed and complexity. The instruments play the theme one after another, imitatively, as in a canon. Bartók uses a variety of extended techniques, from pizzicato to the raspy sound of sul ponticello playing (bowing near the bridge), to the strange col legno (bowing the strings with the wood side of the bow).

The cello provides the solo that serves as the next transition. Although it is called a recapitulation (Ricapitulazione della prima parte: Moderato), it is considerably changed from the earlier music. Both the quiet themes of the first movement and the intense musical ideas of the second movement are reintroduced and re-examined. The Coda: Allegro molto is an exciting accelerando, speeding up irresistibly to the finish.

Along with the elite minority of Finns, Jean Sibelius grew up speaking Swedish, and was raised with a culture that was not his own. Eventually, he and his family rediscovered their roots and became part of the movement to reclaim their Finnish heritage. He incorporated the irregular rhythms, the repetitive musical figures, and the pentatonic and modal scales of Finnish folk music into his compositions.

He also actively sought to throw off the influence of neighboring Russia, which had governed Finland through most of the nineteenth century. He was fiercely anti-socialist, since socialism to him represented the oppression his country had suffered under Russian rule. Hitler, for his part, embraced Sibelius as a “pure” composer. Sibelius did nothing to encourage this, but his failure to denounce Hitler led many to assume that he held Nazi sympathies, despite a lack of evidence for such views.

In 1908, Sibelius was deep in debt, suffering from years of alcoholism, and desperately fearful about a throat tumor for which he underwent several operations (it turned out not to be cancer). His music turned much more introspective, especially his String Quartet, “Voces Intimae” (Intimate or Inner Voices).

The slow introduction (Andante) starts with a soulful dialogue, a duet between the violin and the cello. Soon all four instruments are involved, and the dark, passionate feeling builds. The tempo marking for the main part of the movement (Allegro molto moderato) is but one of numerous changes of speed and mood.

A brief Vivace (Lively) begins without pause, punctuating its intensity with tremolo (fast repeated bowing on each pitch) runs. Playful turns, pizzicato playing, and moments of silence add to the almost ethereal ambience of the movement.

Sibelius uses a five-movement format rather than the usual four. The long central Adagio di molto is thus framed by two faster movements, giving it greater importance. In the strong, even notes and plaintive melodies we hear the composer’s personal anguish. At the end of the movement, the cello is featured prominently, guiding the other instruments as they transform the emotional themes and motifs into closing material filled with peace and contentment.

The fourth movement is marked Allegretto (ma pesante)—fairly fast, but weighty. The use of triplets (three notes to a beat) would ordinarily give the movement the light feeling of a scherzo, but the minor key and strongly accented notes transform it into an intensely serious dance.

The finale (Allegro) is a tour de force, with rapid tremolo runs and a perpetuum mobile (perpetual motion) intensity. Sibelius dealt with both despair and hope in his life, and expressed that struggle in this quartet. When he had finished it, he wrote in his diary: “It’s glorious. The sort of thing that produces a smile even in the presence of death.”