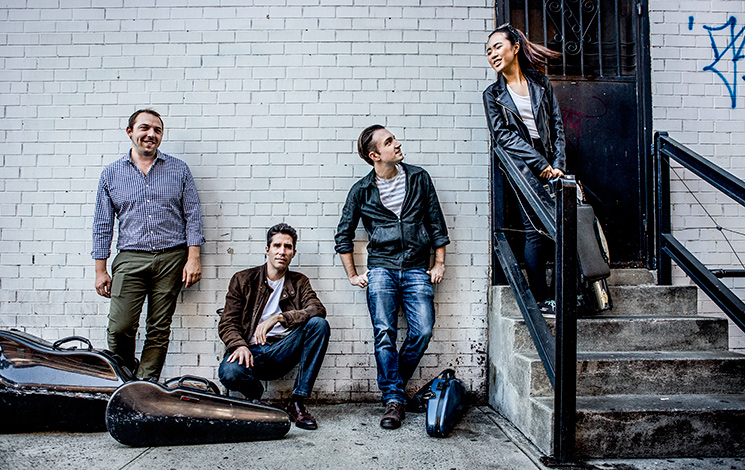 Americans in Paris I

Americans in Paris I

Americans in Paris: Ned Rorem and the Spirit of France
This project is funded by an award from the National Endowment for the Arts

The Escher String Quartet was born in 2005 in New York, where its founding members were studying at the Manhattan School of Music. They quickly became proteges of the Emerson String Quartet, which led to their adoption as quartets in residence at music schools run by two great stars, Itzhak Perlman and Pinchas Zuckerman. The BBC in London took them into their New Generation Artists program, and performances at Wigmore Hall and the Promenade Concerts ensued. In 2013 they were one of the few string groups to be awarded the prestigious Avery Fisher Career Grant, and they are currently the quartet in residence at Southern Methodist University in Dallas. They have toured widely in Europe and the U.S., and last year visited China, as season artists of the Chamber Music Society of Lincoln Center. They have given master classes at the Royal College of Music in London, and in Brazil.

The group, which consists of Adam Barrett-Hart, violin, Danbi Um, violin, Pierre La Pointe, viola, and Brook Speltz, cello, takes its name from the Dutch artist M.C. Escher, based on the artist’s notion of individual elements that combine to form a whole.

Robert Schumann was a pianist above all, and always composed there. He did not think naturally in terms of other instruments (even his admired symphonies have been criticized for their orchestration). But he was determined to conquer the medium of the string quartet, and in 1882 he composed the three quartets of Op. 41, in an incredible burst of creative activity that also saw the birth of the Piano Quartet and the Piano Quintet, in the space of only a few weeks. A number of things contributed to this outpouring: he was just emerging from a period of depression in which he had been quite unable to write; his new bride Clara, whom he deeply missed, had been away on a tour of her own, and was about to return; and he had been immersing himself in the quartets of Haydn, Mozart and Beethoven to see how it was done. Beethoven’s was the example that impacted him most powerfully, as can be seen by the quartets that resulted, since his passionate nature responded most keenly to Beethoven’s lyricism and gruff tenderness.

The quartets were dedicated to his friend Mendelssohn, who greatly admired them. Op. 41 No. 1 was first performed at a soiree given for Clara on her 23rd birthday. Like the others, it has been criticized as unidiomatic, and it is true that Schumann did not have a natural ear for string sonorities. What keeps these quartets alive, however, is his supreme lyrical gifts, and his unerring sense for the shape of a melody.

The first movement begins with a slow, sad Introduzione, with the overlapping counterpoint of the four instruments suggesting the composer’s study of the late Beethoven quartets. Then, a surprise: the first violin moves into a surprising F major, and there is extensive development of this new theme, contrapuntal once again. The working out of all this material is ingenious and thorough, making this the quartet’s longest movement by a considerable margin.

The scherzo that follows strongly suggests the admired Mendelssohn, but with more vigor and less sweetness. The briskly galloping tune that dominates it is even reminiscent of the famous youthful Octet, but on a smaller scale. There’s a slower, gentle Trio before the headlong instruments are off again.

The slow movement, as so often with Romantic composers, is the heart of the quartet. It is a long, haunting melody that has been compared (shades of Mendelssohn again!) to a Song Without Words. The first violin and cello both have eloquent statements, and once again there is some rather unexpected fugal material, decorated with scales and arpeggios that bear a distinct resemblance to Schumann’s piano writing.

The Presto finale begins with an emphatic three-note phrase that is then elaborately decorated and developed. Once again there is busy counterpoint, but the strenuous bustle is beginning to wear out its welcome when the composer relaxes into a quiet, almost nostalgic passage before wrapping the quartet up with a brusque flourish.

Ned Rorem is still astonishingly active at the age of 94 as both a composer and writer—he shares this duality of skills with Virgil Thomson, with whom he is sometimes compared. His 500-plus songs are rightly regarded as a cornerstone of 20th century American vocal writing, though he has composed in all forms. He won a Pulitzer years ago for his orchestral Air Music, which, as he has waspishly observed, is hardly ever played. He is in fact his own best critic. No one could improve upon his estimate of his talents: “I always thought of my music as elegant, pristine, well-tailored and circumspect—French, if you will.”

Born into a wealthy Chicago family of Norwegian ancestry (his father was one of the founders of the Blue Cross health insurance empire), Rorem was educated at both the Curtis and Juilliard schools of music before he went off to France, where he spent 12 years studying (with Arthur Honegger, among others) and living a bohemian life. On his return to the States he published his “Paris Diary,” the first of many such volumes in which Rorem wrote wittily and daringly of his homosexual adventures and his wry opinions of many of his fellow musicians. Despite the continuing success of his written work, however, he sees himself as “a composer who writes, not as a writer who composes.”

The Quartet No. 4 is, like all Rorem’s work, basically tonal, though it certainly bears some dissonance. His original inspiration, he says, was a series of paintings by Picasso, which he portrays in 10 movements lasting from under a minute to about five minutes. The whole work takes a vivid half an hour, and was written in 1994 to a commission by the Emerson String Quartet.

Apparently the Emerson’s performances once cited both labels, but now the quartet uses only the pictorial ones—an example that will be followed by the Escher today, though the descriptive notes are worth knowing. Rorem wrote later: “I now find the device irrelevant in that no music irrefutably depicts other than itself.”

Maurice Ravel had what was possibly the longest and most frustrating musical education on record. He entered the Paris Conservatoire at age 14 and remained there until he was nearly 30. Vastly talented though he was, his work did not appeal to his very traditional teachers, and Ravel failed three times to win the coveted Prix de Rome, and was actually expelled twice—though he continued to attend the classes of his champion Gabriel Faure. Even Faure, however, was not enamored of the quartet that Ravel produced in 1903, when he was 28. He had modeled it structurally on the much-admired Debussy quartet written a decade earlier, and some of his critics described it as derivative of the older master. They may both be conventionally structured, and clearly make use of a much richer string palette than previous chamber composers, but there the resemblance ends. Ravel’s music is more emotionally reticent and shaded, and wonderfully scored for the instruments, which sometimes convey an almost orchestral power. Debussy himself adored Ravel’s quartet, urging him not to change a note, and the public quickly took the work to its heart. It is supposed to be the most played of all 20th century quartets, and is certainly inescapable at Maverick.

The first movement instantly strikes one with the saturated sounds of the strings, their harmonies much darker and stranger than those we are accustomed to in classical and romantic works. The opening is like a faintly melancholy shrug, which transforms, in the second theme, into a radiant kind of yearning. Ravel’s use of modal and pentatonic scales creates a sound world of elusive mystery far from the tonal certainties of the past.

The scherzo movement opens dashingly with a brilliantly scored passage of pizzicato from all four instruments, played in bracing cross-rhythms. Both Debussy and Ravel were said to have been influenced by the Javanese gamelan instruments they heard at the Paris Exposition in 1889, and it shows. The pizzicato section is repeated at the end of the movement, after a muted middle section that returns to the mood of the first.

The slow movement also plays again with the themes of the opening movement, but here the mood is more languorous and dreamy, with some wonderful tremolo effects on the fingerboards. The music expands to a brief climax, and subsides.

The final movement (which Faure criticized as unbalanced and too short) begins with a series of flourishes well described by the composer as “agite.” The effect is of a great wind rushing through the music, tremolo again much in evidence. Scraps of earlier themes are flung around before the quartet ends in another breezy rush.

All program notes are copyright John F. Baker. It is permissible to quote short excerpts for reviews. For permission to quote more extensive portions, or to copy, publish, or make other use of these program notes, please contact us at info@maverickconcerts.org.