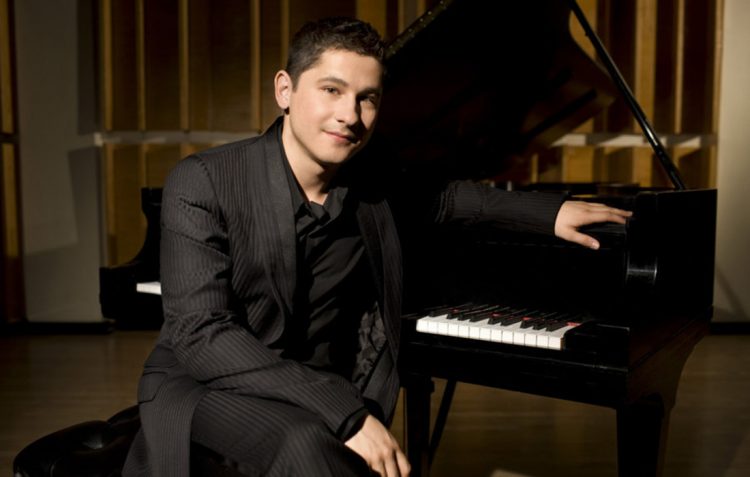 “Eldar’s command of his instrument is beyond staggering.”  —Downbeat Magazine

The program will be announced from the stage.
There will be an intermission.

The New York Times described the New York based pianist and Grammy-nominated artist Eldar Djangirov as “a blend of musical intelligence, organizational savvy, enthusiasm and prowess that was all the more impressive for seeming so casual… an ebullient impressionist.” Dr. Billy Taylor said, “Eldar Djangirov’s playing shows brilliancy, complexity, and discipline…. He’s serious about his music, he’s thoughtful about what he does.” Jazz Times said, “Maybe he made a pact with Lucifer to be the greatest pianist ever.” Praised as “a genius beyond most young people I’ve heard” by Dave Brubeck. Downbeat magazine stated that “his command of his instrument is beyond staggering.”

When Eldar Djangirov (pronounced john-’gear-ov) was signed to Sony Masterworks at the age of seventeen, the young pianist from Kansas City was already well known for his prodigious pyrotechnics and precocious knowledge of the bebop tradition. Along the way, he has had the good fortune to meet and work with the masters, including Dr. Billy Taylor, Michael Brecker, Marian McPartland, Dave Brubeck, Wynton Marsalis, Joshua Redman, Chris Potter, Nicholas Payton, Harvey Mason, Chris Botti, Joe Locke, Ron Carter, Pat Martino, Roy Hargrove, and many others. Through these opportunities and other wonderful musical experiences, Eldar continues to explore new frontiers through composing and performing, enabling him ultimately to realize his own musical vision.

Eldar came to the US from the former Soviet Union in 1997, when he was ten. Among his first performances were in his hometown of Kansas City, as well as The Interlochen Center for the Arts in Michigan. He quickly moved up the ranks and was featured on Marian McPartland’s Piano Jazz show on NPR at the age of twelve. He released two albums independently. Eldar attended University of Southern California on a full scholarship. Eldar signed with Sony and recorded his major label self-titled debut featuring the great bassist, John Patitucci, and Michael Brecker on tenor sax. He followed up with the critically acclaimed Live at the Blue Note with guest appearances by Roy Hargrove and Chris Botti in 2006. Eldar was nominated for a Grammy in 2008 for his album Re-imagination.

Eldar has appeared at numerous major jazz festivals including the Tokyo Jazz Festival, Lionel Hampton Jazz Festival, Java Jazz Festival,
Vienna Jazz Festival, Monterey Jazz Festival, North Sea Jazz Festival, and San Francisco Jazz Festival, and has toured extensively throughout North America, Europe, and Asia. He has performed at venues ranging from the Hollywood Bowl to Carnegie Hall, and has played at the most notable jazz venues across the world. Eldar has been seen on national TV including the 2000 and 2008 Grammy Awards, Late Night with Conan O’Brien, CBS Saturday Early Show, and Jimmy Kimmel Live. In addition, he has also played with world renowned symphony orchestras such as NHK Symphony Orchestra, the Russian National Orchestra, and the San Diego Symphony Orchestra. He has four critically acclaimed trio albums including the most recent Virtue featuring Armando Gola (bass) and Ludwig Afonso (drums) as well as guest appearances by Joshua Redman and Nicholas Payton. “With the release of Virtue, Eldar may have sealed his role in future jazz history” (Bill Meredith, Jazziz). Eldar’s fifth album is his first solo piano album entitled Three Stories which garnered rave reviews. “This is certainly jazz piano, but it’s the kind that belongs in a recital hall…. Djangirov gets to the heart of every song” (Dan Bilawsky, All About Jazz); “Something special goes on here…. In Djangirov’s hands, the piano is a dramatic personage” (Karl Stark, Philadelphia Inquirer); “Djangirov’s playing is simply flawless” (Jeff Tamarkin, All Music Guide). Eldar released two projects simultaneously in 2013; his trio album Breakthrough displays Eldar’s singular sonic imprint on an infectious array of standards and originals, with guest appearances by jazz greats Joe Locke and Chris Potter. His other release in 2013 was Bach/Brahms/Prokofiev, a classical solo piano album that showcases his unique interpretations. In 2015, Eldar released a new live album World Tour Vol. 1. The record covers a wide range of performances with live trio and solo tracks recorded in Tokyo, Philadelphia, Windham, Montreal, Atlanta, Washington DC, Tongyeong, San Diego, and Oakland. Eldar currently resides in New York City.

Raviv Markovitz, twenty-five, is an acoustic and electric bassist who has quickly become one of the most sought-after bassists on the New York jazz scene. Raviv won third place in the 2011 International Society of Bassists Jazz Bass Competition, and was one of fifteen semifinalists worldwide for the 2009 Thelonious Monk International Jazz Bass Competition. He was also tapped for the 2010 YoungArts Jazz Combo, and was a member of the 2009 Grammy Band, performing at Grammy-related events in Los Angeles. In the summer of 2014, Raviv was on faculty at the Calhoun Summer Jazz Workshop in New York and the Stanford Jazz Workshop through its Mentor Fellowship Program. Raviv has toured and performed across the US and internationally across Europe, Central America, and Asia. He has performed with some of jazz’s leading artists including Joe Lovano, Marcus Roberts, Cassandra Wilson, and Jimmy Heath, among many others. He studied with Charlie Banacos, John Clayton, Matt Penman, Bruce Gertz, Mark Helias, and Ben Waltzer. Raviv holds a bachelor’s degree from Columbia University. Bruce Gerts of Metronome Magazine said of him: “He’s ridiculous…. He’s like a young Scott LaFaro. He plays piano well too. He’s a natural!”

Two-time Grammy Award Nominee Eric Doob has established himself as one of New York City’s most exciting and dynamic new drummers, playing and collaborating with some of the leading artists in the world today. Eric’s captivating approach to the drums has been highlighted on tours and recordings with saxophone luminary Paquito D’Rivera since 2008, and he has accompanied the musical legend on a wide variety of projects and artistic collaborations. Eric has performed on multiple international tours with MacArthur Fellow saxophonist Miguel Zenon and his quartet. Eric has also played with Christian Scott, The New York Voices, Dave Samuels and the Caribbean Jazz Project, Edmar Castaneda, and Dr. Lonnie Smith. He has appeared as a guest artist with Wynton Marsalis and the Lincoln Center Jazz Orchestra, and made multiple appearances with the NDR Big Band of Hamburg, Germany. Eric’s drumming plays an integral part in the groups of some of New York City’s most promising new artists, including The Matthew Stevens Group, Ryan Keberle + Catharsis, Alex Brown, and Chet Doxas. In 2013, Eric received a Grammy nomination for his work on Manuel Valera’s New Cuban Express. In 2015 he was again recognized with a nomination for his contribution to Emilio Solla’s Second Half. Eric has performed and taught extensively throughout North America, South America, Europe, and Asia, playing at some of the most prestigious venues and festivals in the world. He is a Sabian Cymbals and Vic Firth Drumstick artist and currently resides in Brooklyn.