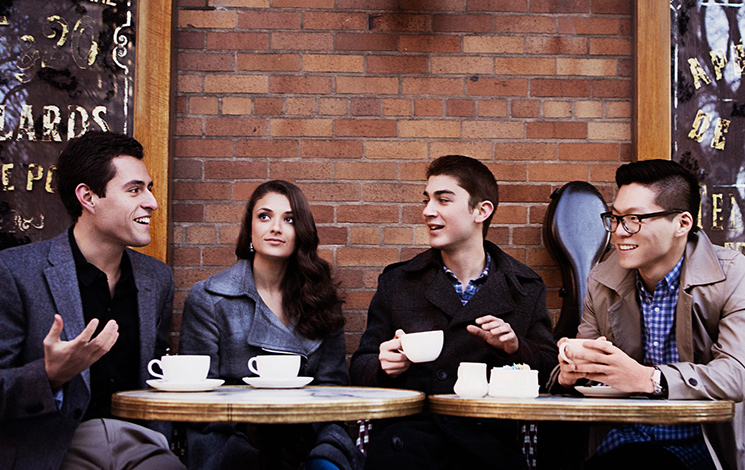 This project is funded in part by an award
from the National Endowment for the Arts.

The Dover Quartet is one of the country’s newer quartets, their international career having been launched on its meteoric rise by a sweeping win of the Banff Competition in 2013. Lauded by The New Yorker as “the young American string quartet of the moment,” they serve as quartet-in-residence at the Bienen School of Music at Northwestern University. They have performed at most major U.S. music festivals, and a recent European tour took them also to the Lucerne Festival. They first got together when they were students at the Curtis Institute of Music, and named themselves after Dover Beach, the work by Samuel Barber that they are performing today (Barber was also a Curtis alum). All four members are solo stars in their own right and have performed as such on records or with orchestras. They are Joel Link and Bryan Lee, violins, Milena Pajano-van de Stadt, viola, and Camden Shaw, cello. They have studied with the Guarneri Quartet, and according to the Chicago Tribune, “have it in them to become the next Guarneri—they’re that good.” The Dover is so much in demand that they have played more than one hundred concerts in the past year.

Andrew Garland, baritone, is one of the leading male recital singers in the United States today, particularly in the modern American repertoire. He also sings a wide range of operatic roles, including, notably, in Angels in America at New York City Opera, though he also specializes in Baroque works. A recent solo CD, American Portraits, made it to the lead spot on Amazon’s list of classical bestsellers. Garland teaches voice at the University of Colorado at Boulder.

Joseph Haydn was forty years old when, in 1772, he composed a set of six quartets that would forever change the character and range of the ensemble. His Op. 20 was born not only out of the composer’s physical and mental state (his health was spotty, and the climate at Esterhazy Palace depressed him) but also from the new currents of thought sweeping Europe, as exemplified by the poetry of Johann Wolfgang von Goethe and the philosophical writings of Jean-Jacques Rousseau. In any case, the set marks a huge step forward from the predictable galant style in which previous quartets had been composed. The four voices achieved increasing independence and equality, minor keys allowed the intrusion of strong emotion, and such novelties as fugal movements and intricate development sections appeared. The set became known as the “Sun” quartets, after the image that appeared on the cover of the printed score. The noted English critic Donald Tovey proclaimed the set “a sunrise over the sonata style, and quartets in particular.” Beethoven and Mozart studied them closely, and Brahms even owned an original autograph score.

No. 5 in F minor is probably the most frequently played of the set; in fact, Haydn put it at the top of the Op. 20 list in his own numbering. It begins in a restless, troubled mood, with the first violin intoning a lamenting theme over a pulsing accompaniment. A second subject strikes a more cheerful note, but the dark mood returns in the elaborate development, which leads to an emotional coda. The whole movement is extraordinarily dramatic in the context of its time, and almost twice as long as any of the others. The Menuetto of the second movement is the expected lively dance, but in an unexpected minor key, continuing the moodiness of the Allegro. A warmer, more cheerful Trio follows it, but it’s only a brief respite. The real relaxation of this tense quartet comes in the Adagio, to a gentle and charming siciliano rhythm. Haydn’s lyricism shines out here, providing a real haven in such turbulent waters. Urgency returns in the remarkable finale, an impressive double fugue, no less (fugues being unheard of in the chamber music of the period). The first theme shows a kinship with Handel’s “And With His Stripes” from Messiah, but the second theme, and Haydn’s meticulous and brainy working out of it all, are very much his own.

Samuel Barber was a solitary figure in twentieth-century American music, a somewhat patrician artist who was enormously popular in his time, all his major works performed and recorded by the leading artists of the day. His music could be violent, even dissonant, but was always tonal, and with an underlying songfulness that won the public’s heart—especially in his ubiquitous “Adagio for Strings.” He won two Pulitzers, lived for much of his life with the more outgoing and flamboyant Gian Carlo Menotti, and left no musical heirs when he died at seventy-one.

Barber’s setting of Matthew Arnold’s poem “Dover Beach” was one of his earliest published works, written when he was only twenty-one years old and still a student, in 1931. Barber was a trained singer and a fine baritone—and in fact made the very first recording of the piece himself. It’s a remarkable choice for a young man to be setting, a wide-ranging but essentially melancholic poem by Matthew Arnold that has become a classic piece of mid-Victorian poesy. It embraces elements of seascape, pessimism about the world, and the power of love, and ends with the deathless lines, “And we are here as on a darkling plain, swept with confused alarms of struggle and flight, where ignorant armies clash by night.” It’s beautifully scored for quartet and voice (sex not specified), and late in life Barber remarked of it: “A very difficult piece, because nobody’s boss, so to speak… It’s chamber music.” A warmer view was taken by Ralph Vaughan Williams, doyen of English composers, who heard it in a 1932 visit to Bryn Mawr College in Pennsylvania, and told Barber: “I tried several times to set ‘Dover Beach,’ but you really got it.”

Ned Rorem is celebrated as a composer with a huge oeuvre—at least 1,000 works, half of them forming an admired collection of American songs. He is also famous for his scandalous series of published diaries, with often scurrilous opinions of his contemporaries and risqué accounts of his homosexual adventures. He is still active at ninety-four, and his work is making several appearances at Maverick this summer as part of an NEA-funded “Americans in Paris” survey. Like the Barber, the “Mourning Scene” is a student work, written in 1947 while Rorem was at Juilliard. It’s based on the Biblical tale of David, Jonathan, and Saul from the Book of Samuel, and the homoerotic elements in David’s love are clear. In fact the work caused a stir when it was performed by some of Rorem’s friends at the Eastman School of Music, where director Howard Hanson was a known homophobe. The six-minute piece is powerfully sensuous.

Antonín Dvořák began the composition of his last quartet while he was still in America and increasingly homesick for his native Bohemia—probably the origin of the work’s moody opening. He then set it aside, composed Quartet No. 13 on his return to Prague (hence its earlier opus number), and didn’t finish the A-flat quartet until later, when it became reflective of his overwhelming joy at his return. The year was 1895, and this was to be his last piece of “absolute” music—i.e. music that has no “program” and is not explicitly “about” anything. The rest of the composer’s life was devoted to operas and symphonic poems with a program. The quartet, though a magnificent work, has never been as popular as the earlier “American,” with its wealth of catchy folk tunes in the American vein, but it is arguably the finer of the two.

The first movement begins with a solemn, wandering cello melody that reaches two strong forte cries before becoming swiftly involved in counterpoint with the other instruments. There is no clear direction to the music until it suddenly bursts into an impassioned, triumphant allegro; and this, with various developments and decorations, holds sway through the rest of the movement. The second movement, Molto Vivace, is in effect the scherzo, and is full of infectious Bohemian dance themes, mostly related to the furiant, a favorite of the composer’s with its syncopations and lively cross-rhythms. It is interesting to note that the flavor is entirely Bohemian—no traces here of the American themes that made such a hit of the American Quartet and New World Symphony. The slow movement is utterly songful, the principal melody based on a song Dvořák had written called “Christmas Night.” It unfolds calmly and peacefully, beautifully decorated, with the two violins interweaving above. A brief central section brings a sense of mystery before the violins resume their duet against a piquant pizzicato accompaniment. They gradually fade to silence. After this it is time for all-out rejoicing, and the Allegro Non Tanto—fast, but not too much; i.e., don’t overdo it—finale, though the longest of the movements, is a pleasurable rush. Previous themes are hinted at, new ones constantly appear, and all are woven together in Dvořák’s miraculous way; it all seems somehow familiar, even inevitable, yet bracingly new and joyous. The last few dozen bars, with their growing exuberance and almost orchestral resonance, never fail to bring down the house.