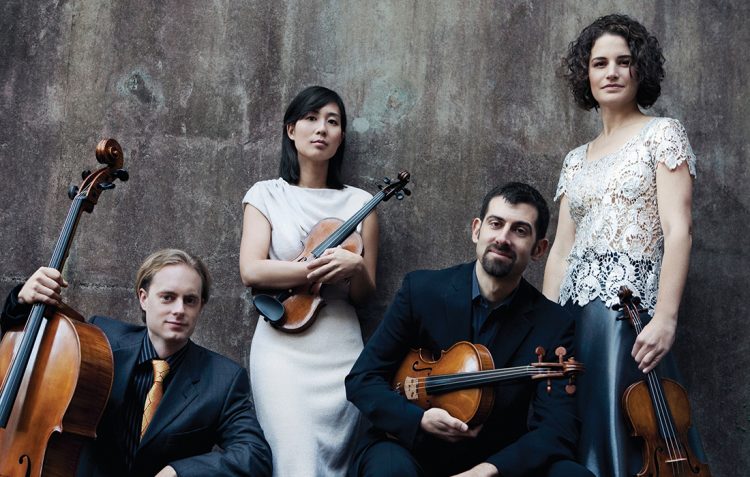 A Maverick Debut
The New Foundations project is supported in part by a grant from the National Endowment for the Arts.

New Foundations IV
New Foundations: Toward a Modern Chamber Music Repertoire is a mini-festival of chamber music composed  in the last thirty years. The series is

The Chiara String Quartet performs internationally from its base in Lincoln, Nebraska. The group is the Quartet-in-Residence at the School of Music in the University of Nebraska-Lincoln. The group is also in residence as faculty at the Greenwood Music Camp, a summer program in Massachusetts for advanced high school musicians.

The quartet has made a name for itself performing from memory, without printed scores. Their most recent album, Brahms by Heart: The Three String Quartets of Johannes Brahms, was recorded without sheet music. The quartet has also recorded the six string quartets of Béla Bartók, performing by heart.

In addition to traditional concertizing, in December 2006 the group began performing in bars and other venues where classical string quartets are rarely found, under the tagline “Chamber music in any chamber.” This has brought them into bars such as The Brick in Kansas City, Missouri; Rose in Brooklyn; Avogadro’s Number in Fort Collins, Colorado; and Avantgarden in Houston, Texas.

The quartet’s professional career started in 2000 with a Chamber Music America Rural Residency grant, placing the group in Grand Forks, North Dakota, where they lived until 2002. The group won the Senior String Gold Medal in the 2002 Fischoff National Chamber Music Competition, was a winner of the 2002 Astral Artistic Services National Auditions, and was selected as the Lisa Arnholdt graduate string quartet at the Juilliard School from 2003 to 2005. The quartet also won third prize in the 2005 Premio Paolo Borciani.

In addition to the Rural Residency grant that began their career, the group has been the recipient of a commissioning grant and three residency partnership grants from CMA, and a Meet the Composer grant.

The quartet’s recording Jefferson Friedman: Quartets was nominated for a Grammy, and their recording of the Brahms and Mozart clarinet quintets was a Hot Pick of October 2006 for NET Radio. The quartet’s performance at Meany Hall in December 2007 was selected as one of the highlights of the year by Seattle Post-Intelligencer’s R.M. Campbell.

From its beginning as a professional ensemble, the Chiara has actively commissioned new works for string quartet. Composer Jefferson Friedman wrote his second quartet for the group in 1999, when they were still students, and his third quartet for them in 2005. Gabriela Lena Frank composed her Leyendas, an Andean Walkabout for String Quartet for the group in 2001, and her Ghosts in the Dream Machine piano quintet for the Chiara Quartet and pianist Simone Dinnerstein in 2005. Robert Sirota wrote his Triptych, a commemoration of the victims of the September 11 attacks, for the quartet in 2002.

The Chiara Quartet has developed extensive educational programs, including a musical version of David McPhail’s Mole Music as well as several programs developed in concert with Young Audiences of New York between 2002 and 2004. The group has worked with Eric Booth extensively, and is mentioned in his book, The Music Teaching Artist’s Bible: Becoming a Virtuoso Educator (Oxford University Press, 2009). While on the roster of Astral Artistic Services, the quartet undertook a large-scale, multi-visit residency at the Rhoads School in Philadelphia, sponsored by a Chamber Music America Residency Partnership grant.

Benjamin Britten always knew that he wanted to make his living as a composer of music. In 1935, Britten got his first job, composing music for the GPO (General Post Office) Film Unit. He had the opportunity of working with painters, film directors, and poets, including W.H. Auden, who became a close friend and later a collaborator when both were in the United States. He began a five-movement string quartet, but decided to cut two movements and publish the remainder as Three Divertimenti for String Quartet.

The work opens with a March, a genre Britten returned to very often during his career. Marked Allegro maestoso, the movement moves through a series of rising and falling lines that impel the music forward, with the raw sound of open fourths, like the open strings of the instruments that are heard when they are tuning up. In the Waltz (Allegretto), the first violin and viola play lyrical lines with pizzicato (plucked) accompaniment. The cello takes the lead, and the relaxed pace gives way to a somewhat hectic feeling. The final Burlesque is a fast (it’s marked Presto) playful romp, but with an edge. As with many of Britten’s works, a calm surface barely conceals a mysterious undercurrent.

The works of Aaron Jay Kernis have been performed by major orchestras and soloists around the US, including the New York Philharmonic, Joshua Bell, and Sharon Isbin. He is the recipient of the 2002 Grawemeyer Award in Music Composition and a Grammy nomination, and is one of the youngest composers to be awarded the Pulitzer Prize, which he won in 1998 for his String Quartet No. 2. Kernis is a member of the faculty of the Yale School of Music. He has said his music is influenced by greats such as Bach, Mahler, and Brahms, but also by Bernstein, who was willing to mingle serious and popular culture and, as Kernis says, because he was “looking for a kind of visceral energy in music, a kind of grab-you-by-the-lapel experience.”

Of his String Quartet No. 1, Musica Celestis, the composer wrote: “Composing this quartet has been an exhilarating experience for me…. If anyone had told me five or even two years ago that I’d write a classically structured work in the future, I’d have suggested (politely) that they see a helpful and friendly doctor…. But I love the emotional inclusiveness of music of the past and have grown weary of the intellectualization that has limited the expression and communicativeness of so much music in this century. I want everything to be included in music: soaring melody, consonance, tension, dissonance, drive, relaxation, color, strong harmony, and form—and for every possible emotion to be elicited actively by the passionate use of those elements.

“As I began writing it, I found that the musical ideas that I chose to work with demanded extensive development and a well-shaped harmonic basis for that development. This led me, with great reservations at first and even greater disbelief, to the use of sonata form. This felt especially new to me since so much of my work in the past derived its inspiration from images or texts. What convinced me to use the form, however, was the organic way that it developed from the musical ideas themselves.

“The form of the first movement follows the traditional exposition-development-recapitulation “formula.” The second movement, Musica celestis, is inspired by the medieval conception of the singing of the angels in heaven in praise of God without end. I don’t particularly believe in angels, but found this to be a potent image that has been reinforced by listening to a good deal of medieval music, especially the soaring work of Hildegard of Bingen (1098-1179). This movement follows a simple, spacious melody and harmonic pattern through a number of variations (like a passacaglia) and modulations, and is framed by an introduction and codas. The Scherzo is made of bits and scraps of things, while the Trio is based on a nonexistent ländler. The fourth movement, Quasi una danza, begins in a halting fashion but develops a dance-like sense as it goes on.

Johannes Brahms destroyed twenty string quartets that failed to meet his standards before allowing the String Quartet in C Minor, Op. 51, No. 1, to be published. Brahms is known for his cyclic structure and thematic economy—he uses versions of the same motifs in each movement as unifying devices. The first movement (Allegro) opens with a rising arpeggio that starts with the first three notes of the C minor scale (C – D – E-flat). Those three notes, as well as the rising chord, are used throughout the quartet. The throbbing accompaniment runs through much of the piece, creating a sharp contrast between the fast figuration and the slower thematic line. The movement ends with the counterpart to the driving arpeggio—a calm, slow, descending line that takes the chord back down to the root.

The slow movement (Romanze—Poco adagio) starts with the same rising notes with the second and third repeated, changed to major, and taken up a fifth to G – A – B. This new theme and rhythm are developed, and other themes are added, sometimes using the same rhythms, and sometimes using the first theme as accompaniment. Although he employs intricate and complicated musical techniques, Brahms never lets the requirements of classical form get in the way of the beauty or expressiveness of his melodies.

Despite its ABA structure, the third movement (Allegretto molto moderato e comodo—moderately fast and comfortable) has one characteristic that makes it unusual for a Scherzo. Instead of being in a triple meter (such as 3/4, 3/8, or even 6/8), it is in a duple meter, that is, one in which the primary beat and all the subdivisions of that beat are an even number. Brahms again employs the theme from the first movement, back in C minor, this time turned upside down. The Trio section, following the more normal pattern of a 3/4 meter, is a ländler, an Austrian folk dance like a country waltz.

The Finale (Allegro) gathers all the melodic and rhythmic motifs from the various movements and recombines them. The first notes are nearly the same as those that started the work, but played high, loud, and in unison. A driving rhythm moves the piece forward to its dramatic conclusion.