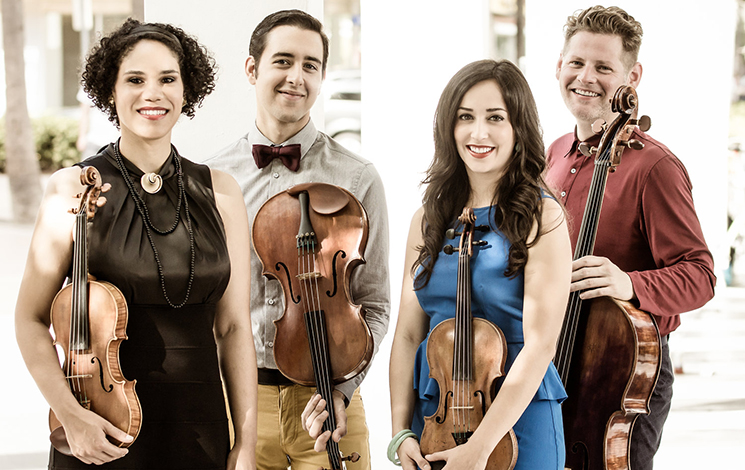 Hailed by the New York Times at their Carnegie Hall debut as “invariably energetic and finely burnished…playing with earthly vigor,” Catalyst Quartet is comprised of top Laureates and alumni of the internationally acclaimed Sphinx Competition. Known for “rhythmic energy, polyphonic clarity and tight ensemble-playing,” the ensemble has toured throughout the US and abroad, including sold-out performances at the Kennedy Center, Chicago’s Harris Theater, Miami’s New World Center. The quartet has also appeared with the Bogata Filharmonic, the Sphinx Virtuosi, and the St. Paul Chamber Orchestra.

The Catalyst Quartet grew out of the Sphinx Organization, which was founded in 1996 by Aaron Dworkin to foster diversity in classical music by encouraging and training black and Latino students to go into the field. The quartet, made up of four principals from the Sphinx Virtuosi, made its Carnegie Hall debut in 2010 and its first appearance at Lincoln Center two years later, winning enthusiastic reviews on both occasions (The New York Times said the ensemble’s performance was “invariably energetic and finely burnished.”) Catalyst has since performed widely throughout the United States, often with other groups that foster a wide range of music in fields outside the classical mainstream. The ensemble has won a Grammy Award for one of its recordings, and has conducted master classes in many universities in this country and in England, South Africa, and Latin America.

First violinist Karla Donehew Perez, who was born in Puerto Rico, began playing at three, and moved with her family to California when she was twelve. She completed her master’s degree in music at the Cleveland Institute, and as a chamber musician has performed with members of the Guarneri, Juilliard, and Tákacs quartets. Second violinist Jessie Montgomery, a native New Yorker, is a violin graduate of The Juilliard School and earned a master’s in composition from New York University; she is the composer in the group, having created a pair of works, Strum and Banner (a set of variations on “The Star-Spangled Banner”) for concert performance and recording by the quartet. Paul Laraia, viola, went on a full scholarship to the New England Conservatory, from which he graduated in 2007; he won the first prize at a Sphinx contest in 2011. Paul has played as a soloist with a number of orchestras, including the Pittsburgh Symphony, the Atlanta Symphony, and the orchestras of Nashville and New Jersey. Cellist Karlos Rodriguez made his orchestral debut at age thirteen, and has since won many competitions and awards and performed with several notable groups, including the Beaux Arts Trio and the Cleveland, Guarneri, Emerson, Tokyo, and Juilliard quartets.

Israeli pianist Daniel Gortler, no stranger to Maverick, was educated in Tel Aviv, and has taken first prizes at international contests in Chile and Germany. He has gone on to an international career both as soloist with many orchestras in Europe and the United States and as a chamber musician. Daniel has made several acclaimed recordings, including the complete Songs Without Words of Mendelssohn.

The members of the Catalyst Quartet, like most musicians (indeed, like most people with a musical ear at all) have always been fascinated by J.S. Bach’s Goldberg Variations. The members of Catalyst were particularly taken by the legendary 1955 recording of the work made by the very young Canadian pianist Glenn Gould. When they discovered that Gould had written a string quartet, they had the notion of arranging the variations for quartet as a way of paying tribute to both Bach and Gould. They worked collaboratively at their transcription for eighteen months and gave it a triumphant first performance at Britain’s Aldeburgh Festival five years ago; they then made a recording that combined some Goldberg movements and Gould’s quartet. The commonly held notion is that Bach wrote the variations for a harpsichordist, Johann Gottlieb Goldberg, to play to a wealthy count who couldn’t sleep. The implication was that the music would soothe the count to sleep; in fact, the intention was to entertain him, to make his sleeplessness more bearable. In any case, the tale is almost certainly apocryphal and, whatever the inspiration, the Goldbergs are a musical monument and a source of unending pleasure and astonishment. The quartet will play the opening and closings Arias, plus variations 1, 4, 5, 10, 13, 19, 21, 29, and 30.

American composer Philip Glass seems to have crammed several lifetimes into the one that began with his birth in 1937 in Baltimore, where his earliest musical influences were the records of modern music in his father’s record store. Glass pursued youthful studies at the Peabody Institute, then at the University of Chicago and Juilliard, where Steve Reich and Maverick’s own Peter Schickele were classmates. Glass studied with Nadia Boulanger in Paris, worked with sculptor Richard Serra, helped form the experimental theater group Mabou Mines, and has written such iconic works as the opera Einstein on the Beach. His own Philip Glass Ensemble, which he formed in 1968, performs his and others’ music. Amid a vast array of other works, he wrote several Academy Award-nominated film scores. One of them, written for Paul Schrader’s 1985 movie Mishima: A Life in Four Acts, was eventually transformed into the Quartet No. 3.

Glass’s music for the film, which was about Yukio Mishima, the Japanese writer who was enamored of Japan’s ancient warrior ways and who killed himself in a ritual suicide, was written in quartet form for the scenes of the writer’s childhood and youth. Of the six movements, the first is the longest. Glass is usually spoken of as a minimalist, though he now prefers to say that his music has “repetitive structures.” The quartet certainly has these in abundance, though the endlessly repeated figures in most of the movements are sonorously scored, which saves them from monotony. Only occasionally does a memorable gesture arise from the prevailing patterns, except in the last movement, where the violins’ sad, touching melody soars out of the repetitive accompaniment and fades into an eloquent silence.

Johannes Brahms, a skilled and active pianist all his life, wrote a number of beautiful piano pieces in the early 1890s, but perhaps none more universally beloved than the three Intermezzi that make up his Op. 117. They were written in 1892, with his old friend (and, in his heart, lover) Clara Schumann in mind, and she responded to them rapturously. Brahms told a friend that they were “three lullabies for my sorrows,” but responded more brusquely to Clara’s enthusiasm by adding that they were also the music of “an irascible bachelor.” The first, and best-known, was inspired by a German translation of “Lady Ann Rothwell’s Lament,” a sixteenth-century Scottish ballad. Brahms himself translated it is as “Sleep softly, my child, sleep softly and deep.” The utterly memorable melody, which becomes rather mournful in the central section, returns in sweet consolation at the end. The second movement, more overtly sorrowful and less placid, also carries a melody of familiar shape, akin to a popular song of the day, “In a Shady Nook.” The third Intermezzo is perhaps the darkest of the three; it seems almost like a Lied, with a stormy but uneasy sense of affirmation in its middle section, then ends in desolation.

César Franck was known largely as an organist—and a composer for that instrument—when, rather late in life, he composed in a few short years the works by which he is chiefly remembered: The violin sonata, the symphony, the Symphonic Variations, and this remarkable Piano Quintet, which for power and passion has to be placed alongside the Brahms. Two memorable stories have gathered around the piece. The first, that it was inspired by Franck’s less-than-professorial feelings toward a comely student, which caused his indignant wife ever thereafter to pour scorn upon the piece and even refuse to listen to it. He should have stuck to the organ, she insisted. Second—and perhaps related—was that Camille Saint-Saëns, who played the piano at the first performance, and to whom it was dedicated, stormed off the stage at the end of the performance, leaving his gift score behind on the piano. (He was enamored of the same lady, and had in fact proposed to her several times, in vain.)

These personal storms notwithstanding, the quintet remains highly enjoyable, in the way Franck’s symphony is—memorable, highly chromatic themes that cycle around frequently in different guises, and unbridled emotionality. It begins with a passionate string figure, answered softly, almost pleadingly, by the piano (shades of Beethoven’s Fourth Concerto here, perhaps). This is all repeated before the piano takes off with the main theme, a thrusting, soaring one. There is a highly dramatic and intense development, with strings and piano sometimes apparently at odds, sometimes in passionate accord, the two principal themes cycling in and out in Franck’s signature manner. Towards the end there is a hair-raising climax, the tension and volume constantly rising, before the quiet final chords. The second movement is gentler, the piano and strings in more obvious concord as they elaborate on a long, thoughtful melody. Toward the end of the movement there are strong, loud string figurations that temporarily overwhelm the piano, but they reconcile peacefully and move sweetly together to a quiet conclusion. Prolonged string tremolos introduce the last movement, which marks a return of the storminess of the first. The piano builds up steam behind them, and soon all five instruments are off in a powerfully rhythmic series of developments of the several cyclic themes. Another big climax occurs at the three-quarter mark, with huge chords pushing the music along. A renewed calm brings reminiscences of the main theme of the first movement, then the music gathers itself together for a resounding conclusion. A stimulated audience can perhaps understand how Madame Franck’s nose was put out of joint by this frank expression of the composer’s passion.