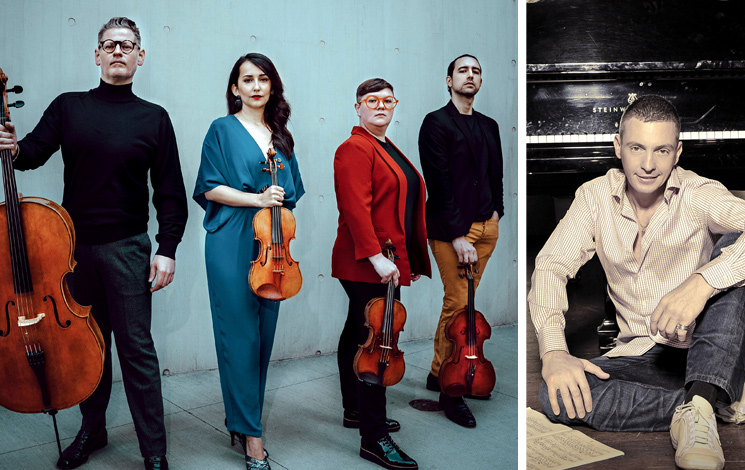 Hailed by the New York Times at their Carnegie Hall debut as “invariably energetic and finely burnished…playing with earthly vigor,” Catalyst Quartet is comprised of top Laureates and alumni of the internationally acclaimed Sphinx Competition. Known for “rhythmic energy, polyphonic clarity and tight ensemble-playing,” the ensemble has toured throughout the US and abroad, including sold-out performances at the Kennedy Center, Chicago’s Harris Theater, Miami’s New World Center. The quartet has also appeared with the Bogata Filharmonic, the Sphinx Virtuosi, and the St. Paul Chamber Orchestra.

Acclaimed Israeli pianist Daniel Gortler has delighted audiences and critics alike with his memorable performances around the world, receiving great praise for both his technical mastery and his musical ingenuity. He has performed as a soloist with orchestras around the world including the Berlin Radio Symphony, the Bavarian Radio Symphony, Orchestre de la Suisse Romande, as well as the Houston, New World, and Atlanta Symphony Orchestras. Other highlights include his debut with the London Philharmonic Orchestra, recital at Wigmore Hall in London, and tours around the world.

Sponsored in part by Garry and Diane Kvistad/Woodstock Chimes Fund.