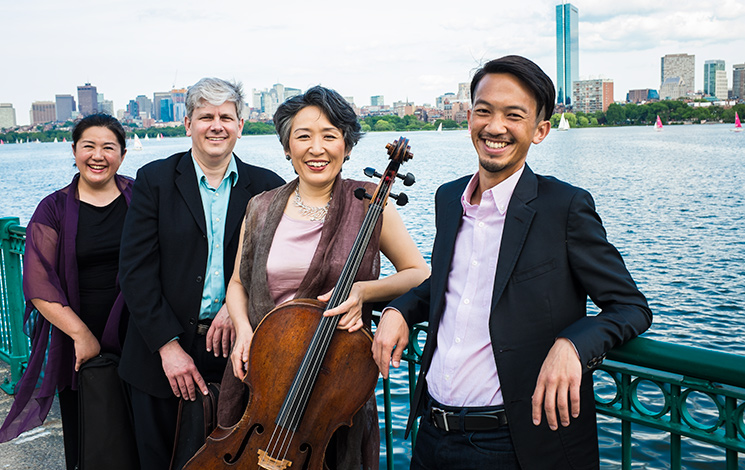 “Americans in Paris: Ned Rorem and the Spirit of France” – This project is funded in part by an award from the National Endowment for the Arts.

Americans in Paris: Ned Rorem and the Spirit of France—this project is supported in part by an award from the National Endowment for the Arts.

The Borromeo Quartet is one of the senior groups now before the public, having launched at the Curtis Institute in 1989, but in their technology they are more up to date than most: they were the first quartet to play from complete scores viewed on computer screens on their music stands. They have been playing this way for nearly ten years now, and are technologically advanced in other ways too. They are keen on music education, and make both audio and video editions of their performances readily available to audiences where they play. The quartet has been widely praised for what the Boston Globe has called “edge-of-the-seat performances,” of which they deliver about a hundred every year around the world, in countless music festivals and concert halls. Their career was launched by winning the Evian International contest in France in 1990, and for twenty-five years they have been quartet in residence in Boston at the New England Conservatory of Music and the Isabella Stewart Gardner Museum; they are also on the faculty of the Taos School of Music Chamber Music Festival. They take their name from the Borromean Islands in Lake Maggiore, Italy.

Nicholas Kitchen, first violin, one of the founding members, is married to the other founder, cellist Yeesun Kim. Kitchen, born into a musical family in North Carolina, has been playing publicly since childhood. He studied extensively at the Curtis Institute with veteran Szymon Goldberg, among others, and has performed as both a soloist and a chamber musician around the world. He is deeply interested in multimedia musical presentation, and has also expanded the quartet’s repertoire by his transcriptions for strings of Bach keyboard masterworks, including The Well-Tempered Clavier and the Goldberg Variations. Second violinist Kristopher Tong is the newest quartet member, having joined in 2006. He was born into a family from Hong Kong who had emigrated to Binghamton, New York. The family moved to Utah, and Tong began his musical life when he was named concertmaster of the state’s Youth Symphony at age fifteen. He completed his master’s degree at the New England Conservatory in 2005, then joined the quartet. Violist Mai Motobuchi was born in Tokyo and has been playing since she was five years old. She won first prize in the All Japan Youth Music contest in 1989, and the All Japan Ensemble contest in both 1990 and 1991. Motobuchi won a scholarship to study in the United States, and joined the Borromeo in 2000. Cellist Yeesun Kim, who plays a sixteenth-century cello, one of the oldest in the world, made her debut in her native Korea at thirteen, won several awards, and came to the Curtis Institute, where she met Kitchen. She is much in demand as a soloist as well as a chamber musician, and she and her husband play together frequently as a duo in addition to their work with the Borromeo.

Mozart’s Adagio and Fugue in C minor, K. 546, is an oddity among his works, an unusual combination that was written for no apparent commercial reason when Mozart was heavily involved with his last three symphonies and was, as seemed so often to be the case, in dire financial straits. The fugue was originally written for two pianos in 1783, when Mozart was keenly studying the fugues of Bach and Handel. Five years later, he decided to rewrite it for strings (a string orchestra version exists as well as the quartet version) and added to it the brief Adagio. This is a strange piece, of unusual gravity and profundity, with a sad rising theme interrupted by sudden abrupt chords; its effect is very different according to how slowly or briskly it is played. The fugue is a superb example of such writing, complete with stretto and inversion, with the theme introduced by each instrument in turn, beginning with the cello and ending with the first violin. The ingenuity is remarkable, the texture somewhat dry for Mozart; the similarity to the great fugue in the finale of the Jupiter Symphony, in terms of skill and complexity, is very apparent.

Ned Rorem’s String Quartet No. 3 is, in fact, the composer’s second, the first having not survived the bottom drawer and No. 2 having been written forty years earlier. (There is a fourth, which we heard earlier this season.) It is hard to come by a recording of it, though brief excerpts heard of the only one that seems to exist show a work of vigorous design and flashing colors, evocative rather than emotional, as is Rorem’s style. Fortunately, the composer himself wrote some perspicacious notes for a performance at Kennedy Center, and these are drawn on here. The first movement, “Chaconne,” opens, surprisingly, with a theme composed in twelve notes (though not, as Rorem is quick to insist, “a tone row in the Schoenbergian sense”—his distaste for serialism being well known). This motif is repeated twelve times, providing the effect of “an unchanging and expressionless sky,” as a background for “various instrumental disturbances. Is that an eagle? A block of clouds?” The second movement is called “Scherzo—Sarabande —Scherzo” and features a forthright but not rapid scherzo also derived from the twelve-note motif in the opening. This develops a scurrying motion that turns into a sarabande, “which is actually the scherzo in slow motion.” The same kind of transformations occurs in the third movement, “Dirge—Dance—Dirge.” Here, a chorale-like theme is stated three times, each iteration followed by a solo cadenza. “A second, more spacious theme grows into a climactic torrent,” which in turn bursts into a rhythmic dance. The dance is in fact a speeded-up version of the Dirge, which returns to conclude the movement. Movement Four, “Epitaph,” is described as “a brief song without words depicting a child’s tomb in bright sunlight.” The finale, “Dervish,” is “a perpetuum mobile surrounding a canon that is based on the sky motif from the first movement.” The whole work takes a little over twenty-five minutes.

J.S. Bach’s Well-Tempered Clavier, written in 1722, is one of the masterworks of Western music, at once an astounding piece of pedagogy and an endlessly fascinating work to listen to. It consists of preludes and fugues in all twenty-four major and minor keys, written for, as Bach put it, “the profit and use of musical youth desirous of learning and especially for the profit of those skilled in this study.” As if this work were not staggering enough, he wrote a second set twenty years later. The “clavier” of the time was either a clavichord or harpsichord, but the work has now been eagerly colonized by pianists; any star with a Baroque bent has played and recorded one or both books. First violinist Nicholas Kitchen’s arrangement for string quartet has often been performed (and also recorded and videotaped) by the Borromeo. Today we hear two preludes and fugues from the first book of The Well-Tempered Clavier: No. 1 in C major, BWV 845, and No. 4 in C sharp minor, BWV 849. The first is very familiar, a series of broken chords that ranges through different harmonies and key changes and was used by Charles Gounod as an accompaniment to his imperishable version of the Ave Maria. The fugue that follows is in four voices, ideally suited to a string quartet. It modulates through various related keys before the voices return to home C major in a combined chord. The C-sharp minor prelude is darker and more somber; its fugue is more deliberate, and in five voices that offer a powerful effect of moving from a massive darkness into light, with a hushed close.

Felix Mendelssohn was eighteen in 1827, when he wrote his String Quartet No. 2 in A minor, Op. 13; the prodigiously gifted teenager already had the miraculous Octet and the shimmering Midsummer Night’s Dream music behind him. More importantly in its inspiration, Beethoven had just died, and young Mendelssohn, remarkably, was engaged in a profound study of the master’s late quartets—although he was almost alone in appreciating them at the time. Beethoven’s Op. 132 seems to be the clearest influence, with its identical key and its changing moods. At the Paris premiere of Mendelssohn’s Op. 13 quartet, an audience member is said to have turned to the composer and said of it: “Just like one of his symphonies!”—meaning Beethoven. Mendelssohn begins with a quote from a love song he had just written, which asks a question of the loved one: “Is it true?” This theme becomes a cyclic motif in the work. (In fact, not until César Franck was a cyclical theme to be used so pervasively.) This forms the grave major-key opening of the quartet and returns strikingly at its close. After the opening, the music moves into a passionate minor-key Allegro, with a strong contrapuntal flavor (another Ludwig touch). The Adagio second movement is a sustained song that also develops a fugal turn in the central section; this becomes increasingly impassioned before the simple song resumes. The staccato, scurrying Scherzo is more typical of the composer in his more familiar vein: fleet-footed and whimsical, with pizzicatos and flying wisps of melody. The Presto last movement begins with tremolo strings before settling into a dashing figure much more impassioned than the Scherzo and framing a remarkable recitative from the violin that somewhat resembles the baritone solo from the Choral Symphony. “Is it true?” returns to close out the work. Mendelssohn wrote other quartets, but this is by common consent the most fetching and affecting.