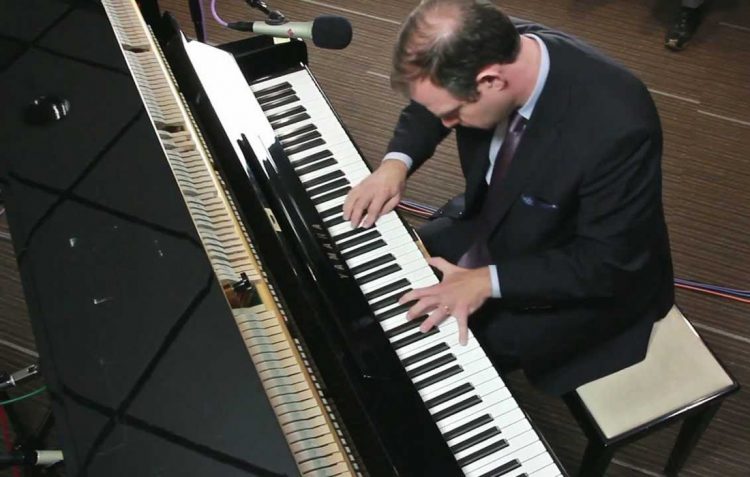 Program
The program will be announced from the stage.
There will be an intermission.

About the Artists
Bill Charlap grew up in a musical household, the son of Broadway songwriter Moose Charlap and singer Sandy Stewart. Taking to the piano at a young age, he went on to study at New York’s High School of Performing Arts. He then entered college, but rather than finishing, opted to practice and gig on his own. Pianist Bill Mays soon took up Charlap’s cause, recommending the young man as his replacement in the Gerry Mulligan Quartet. During this time, Charlap also worked with Benny Carter, Clark Terry, and Frank Wess, and was sought after as an accompanist for singers such as Tony Bennett, Carol Sloane, and Sheila Jordan. In 1995, he secured one of the most coveted piano chairs in jazz, with the Phil Woods Quintet.

All the while, Charlap showed steady development as a leader. His debut came in 1994 with Along with Me, followed by Souvenir in 1995 and Distant Star in 1996. His 1997 release, All Through the Night, was the first to feature his current trio, with the redoubtable (and unrelated) Washingtons, Peter and Kenny, on bass and drums, respectively. In 2000, this lineup had its major-label breakthrough with the highly acclaimed Blue Note disc Written in the Stars. Two albums appeared in 2001: 2Gether with Warren Vaché and Contrasts with Jon Gordon. ’S Wonderful hit the shelves in 2002, as did Stardust, which began a series of albums that each focused on a single composer. Stardust featured the music of Hoagy Carmichael; 2004’s Somewhere was an all-Leonard Bernstein affair; while 2005’s Plays George Gershwin featured ten songs by the man Charlap considers “the American soul.” 2005 also saw the release of an album with Sandy Stewart, Love Is Here to Stay. Two years later, Charlap released Live at the Village Vanguard.

Bill Charlap has performed and recorded with many leading artists of our time, including jazz masters Gerry Mulligan, Benny Carter, Phil Woods, and Wynton Marsalis as well as singers Tony Bennett and Barbra Streisand. Since 1997, he has led the Bill Charlap Trio, now recognized as one of the leading groups in jazz. Charlap is the artistic director of the Jazz in July Festival at the 92nd Street Y, and he has produced concerts for Jazz at Lincoln Center, the JVC Jazz Festival, and the Hollywood Bowl.

Charlap appears at least twice a year for lengthy runs at some of the world’s major jazz clubs, including gigs at the Village Vanguard with the Bill Charlap Trio. Since 2001, Charlap has also recorded as a member of the New York Trio, with bassist Jay Leonhart and drummer Bill Stewart, for the Japanese label Venus Records.

In 2008, Charlap became part of The Blue Note 7, a septet formed that year in honor of the seventieth anniversary of Blue Note Records. The group recorded an album titled Mosaic, which was released in 2009 on Blue Note Records/EMI, then toured the United States in promotion of the album from January until April 2009. The group plays the music of Blue Note Records from various artists, with arrangements by members of the band and Charlap’s wife, Renee Rosnes.

In 2010, Charlap and Rosnes released Double Portrait, a duo piano recording on the Blue Note label. Speaking about the album, Charlap says, “You’re looking for magic moments more than you’re looking for a ‘perfect chorus.’ We’re lucky to have the recording process to document those moments that would just disappear into thin air. It’s exciting to capture something spontaneous that only happens once. There are many of those moments on this recording.”

Time magazine noted in a review that Charlap “approaches a song the way a lover approaches his beloved. He wants to view it from every angle—melody, harmony, lyrics, verse.”

Peter Washington initially played classical bass, and performed with the Westchester Community Symphony at the age of fourteen. Later he worked with electric bass and in rock bands. He went on to study English at the University of California, Berkeley, where he became interested in jazz and began freelancing in the San Francisco Bay area. In 1986 Washington joined the Jazz Messengers and moved to New York City. Since then he has worked in the Tommy Flanagan trio and with Bill Charlap, and was a founding member of the collective hard bop sextet One for All. In 2008, Washington became part of The Blue Note 7. Mosaic was released in 2009 on Blue Note Records/EMI, and Washington toured the United States with the ensemble to promote the album. He has played with Art Blakey, Kenny Burrell, Tommy Flanagan, Dizzy Gillespie, and many other jazz luminaries.