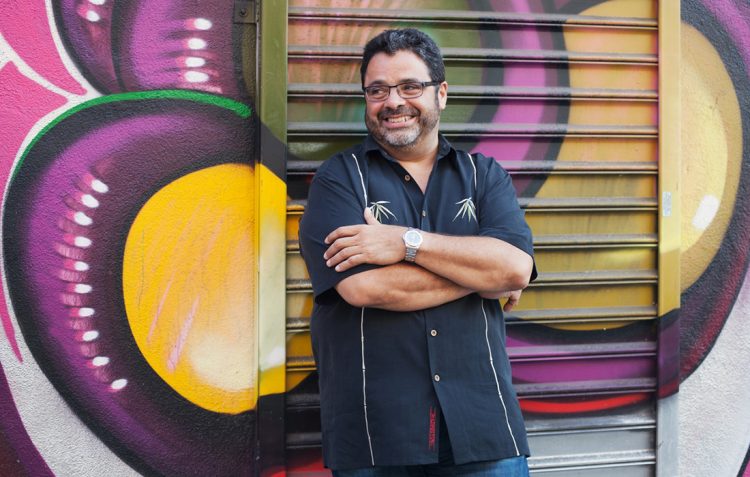 The program will be announced from the stage.
There will be an intermission.
This performance is made possible with support from Sally Grossman.

Arturo O’Farrill, pianist, composer, and educator, was born in Mexico and grew up in New York City. A five-time Grammy winner, he received his formal musical education at the Manhattan School of Music, the Brooklyn College Conservatory, and the Aaron Copland School of Music at Queens College. His professional career began with the Carla Bley Big Band, from 1979 through 1983. He then went on to develop as a solo performer with a wide spectrum of artists including Dizzy Gillespie, Steve Turre, Freddy Cole, The Fort Apache Band, Lester Bowie, Wynton Marsalis, and Harry Belafonte.

In 1995 Arturo agreed to direct the band that had preserved much of his father’s music, the Chico O’Farrill Afro Cuban Jazz Orchestra. In December 2010 Arturo traveled with the original orchestra to Cuba, returning his father’s musicians to his father’s homeland for headlining performances at the Havana International Jazz Festival. Currently, Arturo’s Afro Latin Jazz Orchestra continues the tradition of performing every Sunday nightat Birdland, which has for decades been one of the most popular jazz clubs in the country. He continues to travel to Cuba regularly as an informal cultural ambassador, working with Cuban musicians and students, bringing Cuban musicians to the US, and bringing American musicians to Cuba. Arturo now performs throughout the world as a solo artist and with his own jazz orchestra, as well as with smaller ensembles.

As an educator, Arturo gives master classes, seminars, and workshops throughout the world for students and teachers of all levels, at Yale University, Dartmouth College, Wellesley College, and the University of Caldas, Colombia. He is currently the Director of Jazz Studies at Brooklyn College.

In 2007, Arturo founded the Afro Latin Jazz Alliance as a not-for-profit organization dedicated to the performance, education, and preservation of Afro Latin music.

Arturo has performed at the Kennedy Center, Lincoln Center, Boston Symphony Hall, the Newport Jazz Festival, the Joyce Theater (with Ballet Hispánico and the Malpaso Dance Company, for whom he has written three ballets), and at New York’s Symphony Space, where he and his orchestra have been in residence since 2007. Overseas, Megaron Concert Hall in Athens, Kannai Hall in Yokohama, and the Taiwan’s Taichung Jazz Festival have all hosted Arturo and the orchestra. In 2016 he performed in Amsterdam, Paris, Munich, Los Angeles, San Francisco, Melbourne, and Manizales (Colombia), as well as at the Spoleto and North Sea Jazz Festivals.

A recognized composer of serious music, Arturo has received commissions from Meet the Composer, Jazz at Lincoln Center, the Philadelphia Music Project, Symphony Space, the Bronx Museum of the Arts, the New York State Council on the Arts, and the Apollo Theater. He has also composed music for films, including Hollywoodland and Salud. His music has been used in ballets by the Alvin Ailey Dance Company and the Malpaso Dance Company.

Bambam Rodriguez was born in Caracas, Venezuela. At the age of four he snuck into rock jam sessions, and from the age of seven he was playing the electric bass and studying music on his own. He started taking official music lessons at the age of ten, and one year later joined the Conservatorio de Música Simón Bolívar in Caracas, where he studied double bass. A few years later, Bambam joined the Sistema de Orquestas as a bass player and performed regularly all around the country, working with Simon Rattle and Gustavo Dudamel, among others. At the same time, he kept in contact with his rock roots, and performed and toured the country on many occasions, as well as playing salsa, Afro Cuban, and Venezuelan music in several ensembles.

At the age of eighteen, Bambam traveled to Belgium to get bachelor’s and master’s degrees in jazz double bass, and three years later moved again, this time to Holland for a master’s diploma in jazz, Latin American, and West African rhythms. During his stay in Europe, Bambam performed regularly in Belgium, France, Luxembourg, Holland, Germany, Hungary, and Romania, as well as overseas in Venezuela, Mexico, and the Caribbean, where he worked with the Latin jazz masters Alfredo Naranjo, Nené Quintero, and many others.

In 2012, Bambam moved to New York City to continue his career in music, where he leads and co-leads many musical projects. He has collaborated with Claudia Acuña, Ari Hoenig, Yayo Serka, Juancho Herrera, and Yuri Juárez. He still regularly tours Europe, Latin America, and the Caribbean.

Arturo O’Farrill’s sons Zack and Adam were born and raised in Brooklyn surrounded by jazz, Afro Latin, and classical music. Multiracial, multicultural, and multimusical, the deep creative environment in which the brothers flourished included, in addition to their father and their mother—pianist and educator Alison Deane—the legacy of their grandfather, the legendary Afro-Cuban composer/arranger Chico O’Farrill,.

A drummer, percussionist, and composer, Zack O’Farrill has explored the worlds of hip-hop, electronic music, ethnic music from around the world, twentieth-century classical music, singer-songwriters, and many other sounds.

Zack has performed in some of New York City’s most prestigious jazz venues, including the Jazz Gallery, Dizzy’s Club Coca-Cola, Cornelia Street Café, and Birdland, and has played around the world in clubs and festivals in Spain, Japan, Switzerland, and Cuba. He has been on the faculty of Samba Meets Jazz, the Afro Latin Jazz Alliance, the Flynn Center Jazz Camp, and after-school programs in the New York City public schools. He continues to make music with his father, his brother, and other musicians on and around the East Coast.

Adam O’Farrill began studying piano at age six and trumpet at age eight, while starting to compose around the same time.

Adam and his brother Zack released two well-received albums as the O’Farrill Brothers Band: Giant Peach (2011) and Sensing Flight (2013), both on ZOHO Music and primarily featuring Adam’s original compositions. In 2016, he released his critically acclaimed first album under his own name, Stranger Days (Sunnyside Records), which features Zack on drums, Chad Lefkowitz-Brown on tenor sax, and Walter Stinson on bass.

In 2015, Adam was featured on two of the year’s most acclaimed albums. First, Rudresh Mahanthappa’s Bird Calls, which won the Downbeat Critics Poll for Best Jazz Album, was named one of the Best Jazz Albums of 2015 by NPR, The New York Times, the Observer, and The Chicago Tribune. Later that year, O’Farrill was featured (along with Mahanthappa and his brother Zack) on Arturo O’Farrill’s Cuba: The Conversation Continues, which was nominated for the Grammy Award for Best Large Jazz Ensemble Album and won the Latin Grammy Award for Best Latin Jazz Album. In 2016, Adam was featured on Stephan Crump’s Rhombal, and on Evergreen (Canceled World) from rising composer-pianist Gabriel Zucker and his large ensemble. Adam has also performed with Vijay Iyer, Mulatu Astatke, Steve Lehman, Christian McBride, Jason Lindner, and more.

Adam O’Farrill recently completed his bachelor’s degree at the Manhattan School of Music.

Livio Almeida is a saxophone and woodwinds player, composer, and arranger from Brazil. Winner of the first International Saxophone Competition Victor Assis Brasil in 2015, he received his bachelor’s degree in classical saxophone in Brasilia, Brazil, and a BFA in jazz performance at City College of New York. Livio is a regular member of Arturo O’Farrill’s ensembles, as well as the Eco-Music Big Band. He has played with the O’Farrill Brothers band on their two albums. Livio has appeared in most of the traditional New York venues, including Dizzy’s Coca-Cola Club, the Jazz Gallery, Sweet Rhythm, Cornelia Street Café, Joe’s Pub, Zinc Bar, SOB’s, BAMcafé Live, The Falcon, Barbès, the Iridium Jazz Club, Symphony Space, and Birdland. Livio has performed at the Newport Jazz Festival, the Los Angeles Central Avenue Jazz Festival, New York Winter Jazz Fest, and CareFusion New York Jazz Festival, and has toured around the US and abroad. In addition to the Afro Latin Jazz Orchestra, he has shared the stage with world class musicians such as the legendary Birdland Big Band, Mike Holober, Boris Kozlov, Cidinho Teixeira, Helio Alves, Jon Gordon, and Nelson Angelo.

Livio also has a recorded album, Pieces as a co-leader, and his new record Action and Reaction is to be released soon, under the production of Arturo O’Farrill. He directs a ten-piece band, the only one of its kind in the USA, a “dectet” dedicated to performing large-ensemble Brazilian music in the US, with regular residencies at the traditional Zinc Bar and Iridium Jazz Club.

Almeida is considered a very distinctive voice on saxophone today, being fluent in both jazz and Brazilian musical languages. Livio is one of the regular teachers at the Afro Latin Jazz Alliance Academy of Music.