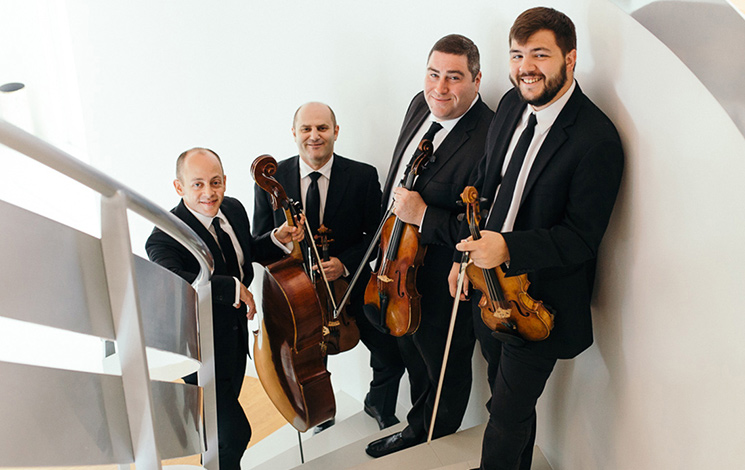 Sponsored in part by Lawrence Posner.

This concert is sponsored in part by Lawrence Posner

The original Amernet Quartet was formed in 1991, and a year later it won the gold medal at the Tokyo International Music Competition and first prize at the Banff International String Quartet Competition; it was on its way to its present eminence as one of the most admired ensembles of its generation. The Amernet has been praised for its “exceptional technical ability” and for the “old-world flavor” of its sound, and has been extremely active in encouraging new composers as well as in its stewardship of the classical tradition. Its present members came together a decade later as the quartet, although three of them had been together earlier at Juilliard. Misha Vitenson, first violin, comes from Uzbekistan by way of Israel, to which he emigrated in 1990 and where he won many awards before moving on to the United States. Michael Klotz, viola, hails from Rochester, N.Y., and graduated from the Eastman School. He made his debut with the Rochester Philharmonic at age seventeen and has played often as a soloist with other orchestras and chamber groups. Franz Felkl, second violin, comes from Alaska. He was trained at the University of Alaska and performed with all major orchestras in the state before receiving his master’s degree at Florida’s Lynn University and becoming concertmaster of its orchestra. Cellist Jason Calloway has played with many orchestras and chamber groups (including the Cleveland, Curtis, Miami, Tokyo, and Juilliard quartets) and is a devoted proponent of new music. The quartet is currently the group in residence at Florida International University in Miami. The origin of their name is somewhat mysterious: The founding quartet members apparently each named their favorite quartet, and “Amernet” is an anagram of some of the letters from each quartet’s name

Jeffery Briggs has one of the most unusual combinations of skills in the musical world. He is both a skilled composer and a computer games designer and executive who has combined his talents by writing the scores for several of the celebrated games he created. He received his bachelor’s degree in composition from Eastman, his master’s from the Scheidt School of Music at Memphis University in Tennessee, and his doctorate from the University of Illinois. Briggs is always looking for new challenges in music and is a Beethoven devotee. He observed one day that, although Beethoven’s string quartets had often been arranged for piano, no one had ever transcribed the piano sonatas for quartet (except the composer himself, in his transcription of the Piano Sonata No. 9 in E major, Op. 14, No. 1). So Briggs resolved to do it himself and—amazingly—tackled all thirty-two sonatas, even the Himalayan peak of the Hammerklavier. It took him several years, but the job is now complete. He was surprised, he says, by how naturally the music fell into the strings, with particular strength in fugal passages, which could be more clearly delineated by four instruments than by two hands. The Amernet, always on the lookout for new works, has been programming these transcriptions frequently, intending to play them all between 2016 and 2019. The Pathétique Sonata transcription received its debut performance by the Amernet in Florida two years ago; it is one of their favorites, and it is easy to see why. Its emotion and drama, so familiar to all music lovers, make it sound like a brand-new Beethoven work in the hands of Briggs and the Amernet. The violins carry the treble, and the viola and cello carry the bass line—all four instruments together open up the line of the music in surprising ways.

Dmitri Shostakovich’s String Quartet No. 8 in C Minor, Op. 110, is by far the best-known and most frequently played of his fifteen string quartets, and the reason is not difficult to hear. It is profoundly moving and contains so many quotations of the composer’s other works that one feels nearly always on familiar musical and emotional ground. The circumstances of its composition were unusual: Shostakovich was out of Russia in 1960, spending a few days near Dresden in East Germany. He was there to compose the music for a movie being made about the disastrous wartime bombing of the city (featured, famously, in Kurt Vonnegut’s Slaughterhouse Five). He was in a profoundly depressed mood. The debilitating muscular weakness that would ultimately kill him had just been diagnosed, and he was also full of guilt about having just joined the Communist Party, after having bravely resisted doing so for most of his life. His anguish inspired him to compose at amazing speed: The quartet was finished in three days. The story has it that, although the music was officially dedicated to the memory of the victims of fascism, Shostakovich thought of it as a kind of lament for his own death. He was believed to have been actively considering suicide at the time, and there is a disputed story that he was about to swallow a fatal dose of tablets when a friend took them away from him. Comparisons have been made with Tchaikovsky’s Pathétique Symphony, which has similar suicidal tones—except that in that case the composer followed through.

In any case, the music is undoubtedly somber, dark in both material and sound—the writing is predominantly for the lower strings and the lower notes of the violins, with their upper registers emerging only in the two brisker central movements. The first of the three Largo movements—all five movements are interconnected—starts with a statement of the composer’s own musical signature, DSCH—S is E flat in German notation, H is B natural—which he often used and which appears as a linking motto throughout the quartet. There are frequent quotations, from the first and tenth symphonies, the first violin concerto, and the first cello concerto, among others, as the music muses mournfully on remembered moments. The Allegro Molto and Allegretto that follow move more swiftly, but they are hardly less dark, and proceed in the composer’s familiar vein of anxious, relentless galloping. The second Largo begins with the famous effect that reminds the listener of an air raid—a cello drone interrupted by what sounds like artillery fire. This recurs several times as the movement moves broodingly forward, rising toward the end to a momentary, if sad, warmth. The last movement, played very quietly, is like a farewell to life, with a recurring five-note motif that urges it agonizingly along. Shostakovich’s quartets are said to be his most personal utterances; none is more so than No. 8. When Russia’s Borodin Quartet first played it for him, he is said to have buried his face in his hands and wept.

Antonín Dvořák’s String Quartet No. 9 in D Minor, Op. 34, is set in a minor key, but it could hardly be a greater contrast to the Shostakovich. It was written in 1877, by which time the composer had already written eight other quartets, all in a rather undisciplined vein—one ran over an hour!—and had finally achieved greater mastery of his materials. He had already won a major musical prize, judged by Johannes Brahms and the famous German critic Eduard Hanslick, and Brahms had just recommended Dvořák’s work to his own publisher, Simrock (who was soon thereafter to achieve a huge success with the first set of Dvořák’s Slavonic Dances). So a grateful Dvořák dedicated this quartet to Brahms, and two years later even incorporated some of Brahms’s suggestions in a revision. It’s said that Dvořák had written the work expressly to impress Brahms, and it is impressive; it’s remarkable that it isn’t played more often.

Although the quartet was written in the wake of the deaths of two of the composer’s young children, it shows only a gentle, rather resigned melancholy in its slow movement. Otherwise it is a sunny, dreamy work, the effect of its opening Allegro rather like that of a river flowing along in sunlight. It begins in this relaxed vein, with the flowing theme beautifully decorated and varied in Dvořák’s usual skillful manner. A series of decisive chords leads to a coda that offers several more artful variants of the principal theme. The second movement is one of Dvořák’s favorite dance tunes—this time a polka, a sinuously dancing theme varied with enticing ornaments and enclosing a pert trio that is equally graceful, before the initial dance returns. The Adagio bears a deeply nostalgic, gently melancholy melody that has the feel, if not the shape, of the famous “Going Home” theme in the New World Symphony. It is a song that is woven into beautifully harmonized progressions. The whole movement is uneventful, but moves along so sweetly and dreamily it casts a quiet spell. The finale has an infectiously bouncy motion (somewhat suggestive of Brahms, and perhaps designed as a flattering imitation) that is nicely varied and expands into a songlike central section before the work ends in a frolicsome coda. The whole quartet is perhaps a little overextended, at nearly half an hour, but is full of delights, if not of surprises.