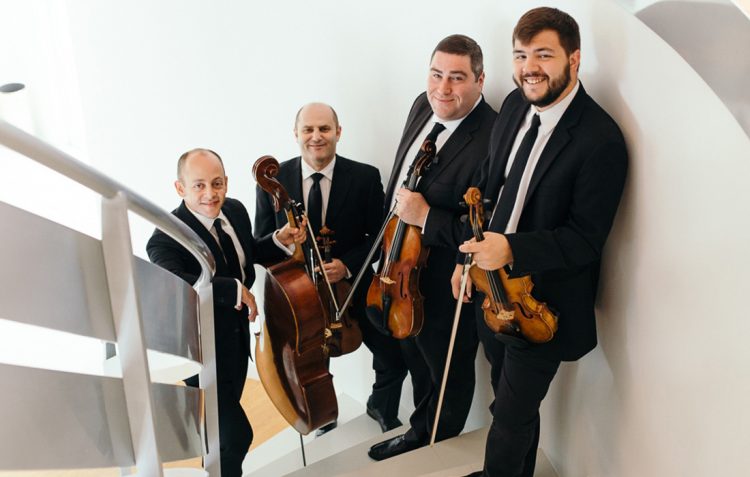 Praised for their “intelligence” and “immensely satisfying” playing by The New York Times, the Amernet String Quartet has garnered recognition as one of today’s exceptional string quartets. Ensemble-in-Residence at Florida International University since 2004, the group was formed in 1991, while its founding members were students at The Juilliard School. Amernet rose to international attention after their first season, winning the Gold Medal at the Tokyo International Music Competition in 1992. In 1995, the group was the First Prize winner at the Banff International String Quartet Competition.

Their busy performance schedule has taken the group across the US, as well as throughout Europe, Japan, Korea, Canada, and Mexico. They have collaborated with numerous artists and ensembles including the Tokyo, St. Lawrence, and Ying string quartets as well as Shmuel Ashkenasi, Ida Kavafian, Ruth Laredo, and James Tocco.

The Amernet has held residencies at Northern Kentucky University, the University of Cincinnati College–Conservatory of Music, and the Caramoor Center for the Arts. They have appeared at Ravinia, Lincoln Center, and the Mostly Mozart Festival, and at major festivals around the world, including the San Miguel de Allende and Morelia music festivals in Mexico and the Bowdoin festival in Maine. The Amernets founded the Norse Festival, a summer chamber music workshop for young musicians at Northern Kentucky University, and host an annual summer chamber music camp in Miami called Animato.

The Amernet has commissioned works from many of today’s leading composers, including Anthony Brandt, John Corigliano, and Toshi Ichiyanagi. The Amernet also actively advocates for neglected works of the past and aims to enliven the concert experience through its innovative programming.

Pianist Ran Dank deploys his brilliant technique with astonishing energy, intellect, and intensity, captivating audiences and critics alike. In recent seasons, he has performed at Merkin Hall and Alice Tully Hall, and has toured with his duo partner and wife, pianist Soyeon Kate Lee. The New York Times reviewer was “absorbed and exhilarated” by their performance of the world premiere of Fredric Rzewki’s Four Hands at New York City’s Le Poisson Rouge.

Mr. Dank has appeared as soloist with orchestras around the US and in Europe. In his native Israel, he has performed with the major symphony orchestras and at the Israel Conservatory of Music. Mr. Dank won first prize at the Hilton Head International Piano Competition, as well as prizes at the Naumburg and Sydney competitions.

Mr. Dank earned his bachelor’s degree from Tel Aviv University, and his master’s degree from The Juilliard School, where he worked with Emanuel Ax and Joseph Kalichstein. He is currently pursuing his doctorate with Ursula Oppens and Richard Goode at the Graduate Center of the City University of New York.

It is a common practice for music festivals such as the Maverick to schedule music from three different eras—often Classical, Romantic, and Modern or Contemporary—in each program. This is not the way music would have been heard in concerts in the nineteenth century. Before the phonograph, music was heard by the public either in a concert hall, at a salon, or in the home, played from sheet music purchased for that purpose. Most of the art music people heard was written by living composers. We are in many ways fortunate that we have classics that remain in the repertoire through time. But we have also lost the sense of what it must have been like when the composers of the day were the stars. So it is a rare treat to have this program at the Maverick, in which all three of the pieces were written in a single four-year period, between 1885 and 1889. This is how the concert-going public of the late nineteenth century might have experienced a performance.

Hugo Wolf is best known as a masterful and prolific composer of art songs. He stood with the avant-garde Wagnerites, calling the more classically oriented Brahms a reactionary. In a letter to a friend, Wolf wrote that the opera he envisioned writing would be filled with the strumming of guitars, sighs of love, moonlit nights, and banquets with champagne. When he wrote the Italian Serenade, Wolf was also at work setting the verse of the Prussian poet Joseph Freiherr von Eichendorff. One of the major exponents of German Romanticism, Eichendorff had also wrtten a novella about a young musician who charms some and antagonizes others—just as Wolf himself had. The novella contains a performance of an “Italian Serenade.”

Although Wolf sketched other movements, the Molto vivo is the only one he completed. It starts with a carefree theme (perhaps representing the charming hero), accompanied by fast and light chords that imitate strummed guitars. This theme recurs, interspersed with different musical episodes, making this movement a loosely organized rondo. One of the episodes is a cello solo in recitative style, like the anguished declamation of a jilted lover. But the heaviness is belied by the delicate little figures in the other voices that punctuate the cello’s phrases. Wolf is, perhaps, parodying his own dramatic intensity. At the end, the anguished theme returns, followed immediately by the cheery theme, and we hear that they are in fact merely different treatments of the same musical thought.

In the late nineteenth century, the piano quartet reached a high level, with masterpieces by Schumann, Brahms, and Antonín Dvořák. The Piano Quartet in E-Flat, Op. 87, is the second of Dvořák’s two works in this genre. A forceful theme opens the Allegro, played in unison by the strings. The piano responds with a prancing dotted rhythm. These elements go through several transformations, together and separately. The conclusion puts the main theme in fast-bowing tremolos over a gentle piano, after which all the instruments crescendo to the end.

In the Lento, the cello sings the first tune. As he did in other works, Dvořák constructed this movement using multiple themes, this time with five different melodies. Although several of the themes share some musical fragments, each has a different emotional character, ranging from wistful to angry.

The third movement (Allegro moderato, grazioso) opens with a ländler, a country waltz with a folk flavor. An unusual interval (an augmented second) in the piano’s secondary theme gives it the exotic flavor of a Middle Eastern scale. The central section features the violin in a highly accented dotted rhythm, which is then taken up by the other instruments.

The Finale (Allegro ma non troppo) recalls the high energy of the first movement, as well as its contrasting darker sections. Just when it seems to be coming to a final cadence, Dvořák modulates the key downwards several times, and then back up the scale again. Although this work uses fewer folk elements than other works from his nationalistic period, it is nonetheless highly emotional and expressive.

Juliusz Zarębski (pronounced Yooliush Zarempski) was a Polish composer and virtuoso pianist. He received degrees at the conservatories in Vienna and St. Petersburg, after which he studied with Franz Liszt. Liszt supported Zarębski’s career by appearing with him in concert and helping to get his music published. The young pianist performed around Europe to great acclaim, and in 1880 was appointed professor of piano at the Brussels Conservatory. Zarębski mastered the newly invented two-keyboard piano, and played it at the Paris Exhibition of 1878. He died in 1885 of tuberculosis, at the age of thirty-one.

Although most of Zarębski’s works are for solo piano, his masterpiece is his Piano Quintet in G Minor. The work is notable for its driving movement, its prodigious melodic inventiveness, and its masterful interplay between piano and strings. In the opening Allegro, the first theme is introduced by the second violin and viola in duet. At times, the piano plays fast runs below slow, deliberate lines in the strings. At other times, the piano introduces new themes, or provides chords to accompany a cello solo. As the movement ends, a cascade of descending arpeggios leads to a powerful conclusion.

The slow movement (Adagio) moves to E-flat major. As the piano plays grand, rolling arpeggios, the first violin, low in its range, intones a gentle and mysterious song. There are numerous key changes, and although the tone is subdued (it is marked tranquillo), the motion never stops. The movement ends with two simple chords on the piano as the strings play pizzicato (plucked notes).

For the Scherzo, the strings gallop as the piano plays the tune. The parts switch roles, and then switch back again. Themes alternate in a headlong rush, and the forward movement continues even when the tone is gentle.

Zarębski uses cyclic structure in the Finale (Presto), quoting from each of the earlier movements. A repeat of the Scherzo theme opens the movement. The tempo accelerates to a near-climax, and then the Adagio from the slow movement, with the low violin, interrupts. Another quick change takes the music to Allegro molto in G major, with all the instruments in triplets (three notes to a beat). Grand gestures pervade throughout, especially in the long cadential section.

Despite his poor health, Zarębski was able to perform at the premiere of this piece. Liszt proclaimed that it was perfect. But the piece was not published, and languished in obscurity until 1931. Since then, it has become part of the quintet repertoire, and is considered a masterpiece of the late nineteenth century.