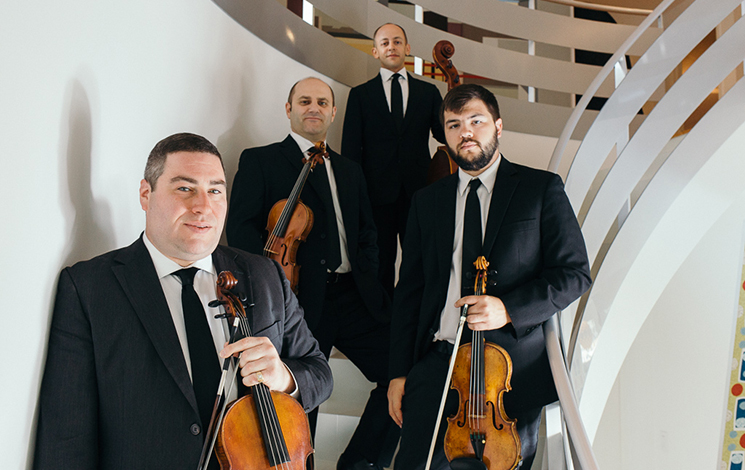 En Plein Air by Woodstock School of Art’s Staats Fasoldt
Artwork to be raffled during intermission.

This concert will be filmed live by “50′ Inside” for TF1, France

www.amernetquartet.com
From Maverick to Woodstock: in the Spirit of the 60s IX

Praised for their “intelligence” and “immensely satisfying playing” by the New York Times, the Amernet String Quartet has garnered recognition as one of today’s exceptional string quartets and is Ensemble-in-Residence at Florida International University in Miami. Their sound has been called “complex” but with an “old world flavor.” Strad Magazine described the Amernet as “…a group of exceptional technical ability.” The Amernet’s have collaborated with many of today’s most prominent artists and ensembles including the Tokyo and Ying quartets as well as Shmuel Ashkenasi, Robert deMaine, Roberto Diaz, Gary Hoffman, Ida Kavafian, Anthony McGill, Sherrill Milnes, Michael Tree. Earlier in their career, the Amernet won the gold medal at the Tokyo International Music Competition before being named first prize winners of the prestigious Banff International String Quartet Competition.

Sponsored in part by Lawrence Posner

From Maverick to Woodstock: In the Spirit of the 60s IX

The Amernet String Quartet’s playing has been described by The New York Times as “immensely satisfying.” Founded in 1991, when its members were at The Juilliard School, the quartet has won numerous awards and has collaborated with many celebrated artists and ensembles, touring all the major U.S., European, Asian, and Latin American festivals. Very active on the contemporary music scene, the Amernet has commissioned works from many leading composers, including John Harbison, John Corigliano, and Morton Subotnick. They are currently quartet-in-residence at Florida International University in Miami, where they are in the midst of a program in which they will perform all of the transcriptions for quartet of Beethoven’s piano sonatas, one of which they are performing today. First violinist Misha Vitenson was born in Tashkent, Uzbekistan, where he first studied with his violinist father. He emigrated to Israel in 1990 and began a solo career before coming to the United States in 1996. Vitenson won several violin competitions, earned a bachelor’s degree at Lynn University in Florida and a masters at Juilliard, and joined the quartet in 2002. Second violinist Avi Nagin is new to the group this year. A graduate of the Yale School of Music, he is an active chamber and orchestral musician who has collaborated with the Ébène and Orion quartets; he has been principal second violinist with the Princeton and Symphony in C orchestras and has played with the New Jersey Symphony. Nagin is on the faculty of the Eastern Music Festival and has conducted master classes at Carnegie Hall with Leon Fleisher, Yo-Yo Ma, and Pamela Frank. Violist Michael Klotz, a native of Rochester, N.Y., and a graduate of the Eastman School of Music, made his solo debut with the Rochester Philharmonic at age 17 and went on to take an unusual masters in both violin and viola at Juilliard. He has played as a guest violist with several major chamber groups, including the Shanghai and the Borromeo string quartets. Klotz joined the Amernet in 2002. Cellist Jason Calloway comes from Philadelphia and is a graduate of Juilliard and the University of Southern California. He has collaborated with other quartets, including the Curtis, Cleveland, Juilliard, and Miami. He is devoted to contemporary music and has worked with such composers as Elliott Carter, Harrison Birtwhistle and Hans Werner Henze, and with Pierre Boulez and his Ensemble Intercontemporain.

Ludwig van Beethoven’s “Pastorale” sonata was written right after the “Moonlight,” in 1801, at a time when all was going well for the composer. He was earning, he said, a lot of money, and could barely keep up with the commissions he was receiving. This sonata, therefore, is genial and relaxed, a far cry from the more dramatic ones he had already written and would write. It is also the last one in which he followed the traditional outline of four movements in conventional shape. It has a strong rhythmic impulse throughout, and a bass that often resembles the bagpipe effect that appears also in the Pastoral Symphony. Being so thoroughly pianistic, with many elaborate runs and arpeggios, it would also seem a difficult one to translate to the string quartet. Jeffery L. Briggs, however, is nothing if not intrepid, and the result of his transcription efforts are bound to be effective, judging by our experience of the “Pathétique” by the Amernet last summer. Briggs is a highly unusual combination of technician and musician. Armed with a degrees in composition and music theory, he became fascinated by the world of computer games, creating several of his own, and even heading a major production company, Firaxis Games, which he eventually sold. Briggs wrote music for several of the games he created, including “Civilization,” and has written extensively for chamber groups (including quartets) and orchestra. He set out some years ago to transcribe all thirty-two Beethoven piano sonatas for string quartet; he completed the job, and now the Amernet is performing them all, both in its home base of Miami and on tour.

Dmitri Shostakovich was in failing health during the composition of his last four string quartets. He had heart problems and severe arthritis, and sometimes wondered aloud whether each work would be his last. His twelfth quartet, however, shows no diminution of his remarkable creative powers; in fact, it marked an unusual departure in his music. For the first time, he flirted with the twelve-tone system and serialism, although the work is firmly bound to a key: D flat major, one avoided by the likes of Haydn, Mozart, and Beethoven because, with five flats, it is difficult for the musicians. That’s not the only way in which this piece is hard to play: There is also the hectic speed of some sections, the dynamic extremes, and the fact that the second movement is three times as long as the first. It was unusual for a Soviet musician to stray into Schoenberg territory, but it was not unknown among Shostakovich’s younger colleagues; Joseph Stalin, who rejected Western culture and its “bourgeois principles,” was, after all, fifteen years dead by the time Shostakovich was writing his last quartets. In any case, the composer remained basically tonal to the end. The long-lived Beethoven Quartet had been friends of Shostakovich all his life, performing many of his works; the twelfth quartet was dedicated to the Beethoven’s first violinist, Dmitri Tsyganov; four of Shostakovich’s last five quartets were dedicated to individual members, the last to the whole group.

A twelve-tone row in the cello begins the work, followed by the first violin in its lowest register and the viola playing a sorrowful lament. This is dwelt on at some length before a pizzicato passage launches a melancholy, waltz-like figure that wanders about disconsolately. The twelve-tone idea returns in fits and starts; after another version of the lament the movement peters out as if exhausted. The beginning of the long second movement, which is almost symphonic in scale, is dominated by a repeated descending five-note figure that suggests the motto from Beethoven’s Fifth Symphony. It is first voiced by the cello, but then the other instruments seize on it obsessively. The cello plays an intense version that seems again like mourning, before the first violinist begins a strange pizzicato that ticks like a clock. This speeds up and climaxes with huge, dense pizzicato chords from all the instruments. The various sad themes are restated, and it begins to look as if the work will end in lamentation. But the inescapable five-note figure reasserts itself, speeds up and builds in volume and force to a finish that feels both powerful and relentless.

Antonín Dvořák had experienced his first great success with the Slavonic Dances, and had been besieged with requests for more works of Slavonic flavor, when a commission came to him from the celebrated Hellmesberger Quartet in Vienna for a new work. The composer seems to have forgotten about it while he worked in 1881 on a now-forgotten opera, but was reminded when he read in the newspaper that the quartet expected to premiere the quartet in a few months. He set to work hastily, ever mindful that a Viennese group would not necessarily expect a work in the Bohemian style, but rather that something in the more classical vein would better befit their city. As a result, the Op. 61 quartet has little of Dvořák’s usual Czech flavor, but is constructed and developed in a vein that owes more to Beethoven and Schubert (especially the latter, whom Dvořák adored) than to the colorings and rhythms of his native turf. The result is themes that often launch with a Bohemian feel but are then developed in a classical way. The long and ambitious first movement is a good example. It has a striding, almost galloping opening theme that morphs into a more introspective second subject (with a strong resemblance to the opening measures of Handel’s “See, the Conquering Hero Comes” from his oratorio Judas Maccabaeus), and both motives are extensively developed — perhaps too extensively, despite many beautiful moments. The second movement, marked with a molto cantabile that recalls Beethoven, is basically an extended love song, introduced by the violins intertwining amorously with tender support from the lower strings. A beautiful second subject follows, slower and less passionate, and the music gradually quietens. It seems as if its feelings will dissipate, before the love music returns to bring a quiet, relaxed close. The last two movements have more native spice. The scherzo quotes from Dvořák’s own Polonaise for Cello and Piano, a simple phrase repeated rhythmically so that it becomes a sort of dance. The middle section offers a flowing, rustic-style tune that also has a dance flavor. In the last movement excitement comes to the fore, with a lot of virtuoso fiddling and scintillating violin flourishes accompanied by the viola in broken octaves; the whole quartet eventually takes up their music, with some fugal moments sure to please the Viennese. This all works up to a climax, leading to what seems like a quiet coda, with a wandering violin; but this is interrupted by a brilliant final burst. The remaining Dvořák quartets have more of his unique native styling and color, but none was more in the grand tradition than this one.